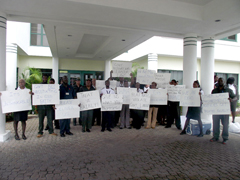 Freeport, Grand
Bahama - Rudolph Stubbs, Vice-President of the Bahamas Customs and
Immigration Allied Worker's Union announced, "As of 5th April, 2012
Customs and Immigration is officially on strike until our employer
resolves all of our new issues and signs off on our new industrial
agreement."  Employees of Bahamas Customs and Immigration demonstrated
peacefully today outside the Bahamas Government Office Complex on the
Mall Drive in Freeport, Grand Bahama.

"We have a strike
certificate that entitles us to take this action if our issues are not
resolved by the Ministry of Labour.  The union applied for a strike poll
July 17th, 2011.  The Minister took one and a half months to sign it.
We had to run him down unfortunately.  We filed our trade dispute at the
end of October, 2011...