With the onslaught of Covid-19 in mid-March, gears shifted at Bahamas Feeding Network, the organization committed to tackling hunger in the Bahamas since 2013. From cooking and distributing 5,500 hot meals weekly from its quaint Fox Hill headquarters to moving its operation into a 4,000 square foot warehouse on Claridge Road, volunteers have kept the assembly line going packing hundreds of food parcels for distribution through the Network’s membership of churches, soup kitchens and feeding centers.

At a press conference recently held, executives and friends of the organization provided an update on BFN’s efforts pre and post-Covid-19.

During a two and a half month period beginning on March 18 through May, BFN distributed $405,000 in food parcels and $43,000 in gift cards. Named to the National Food Distribution Task Force in June, the Network has since been given the responsibility for providing food items to residents of Northeastern New Providence and the southeastern Bahamas.

BFN Executive Director Philip Smith lauded the government for the establishment of the task force and explained the funding model.

“We want to say thank you very much to the government for including BFN in this initiative which we have been impressed with from the onset,” he said. “The professionals and NGOs who have been appointed have done a yeomen’s job in their own right and are now responsible for the national effort. The Task Force determined a budget of $18.8 million to fund the program for the period of June 1 to the end of August. The government donated $16 million with the balance of $2.8 million to be split between the nine zones managed by Bahamas Feeding Network, Bahamas Red Cross - which are each responsible for two zones - Lend a Hand, Hands for Hunger, IDEA Relief, ONE Eleuthera and GB Food Task Force.”

“I would like to encourage corporate Bahamas and individuals to please do their very best in donating to the cause,” Smith said. “A lot of us have not experienced true hunger before. We’ve had zone leaders who have gone into areas and come across children crying due to not having sufficient to eat.”

Double-teaming on the donation appeals were Patricia Minnis, Spouse of the Prime Minister and Patron of Bahamas Feeding Network and longtime fund-raiser and supporter Nancy Kelly who urged the public to be generous in their giving.

“There’s a Bahamian saying which goes - little by little, bucket full,” Ms. Minnis said. “If you have a leak and you put a bucket underneath it, eventually the bucket will fill with water. The principle is the same, the very little that you may have, give it, whatever you can if only to your neighbour who you know may now be without a job.” 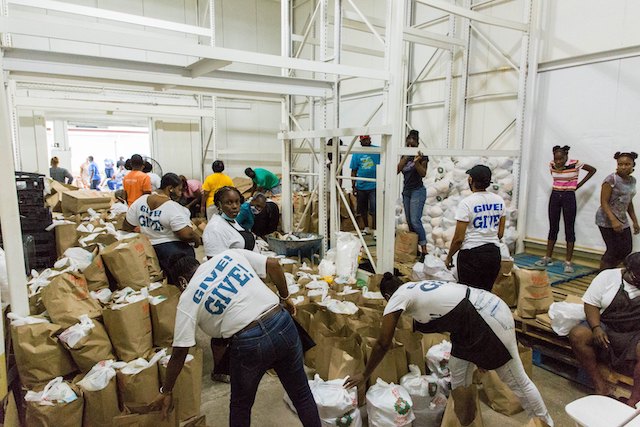 Bahamas Feeding Network volunteers organize food packages at their Claridge Road facility prior to collection for distribution in the Northeastern Zone of New Providence as part of efforts of the National Security Food Task Force. (Photo by Cay Focus Photography for DPA.)

“If you can afford to give a $50 donation, you’re feeding one family for a week,” said Ms. Kelly. “Can you imagine if 1,000 people give $50 what that would mean for this organization? I am proud to be a part of this organization and I will continue to support it.”

With the rate of unemployment pegged at 40% and unexpected delays in hotel re-openings extending the reduced income of furloughed employees, Smith forecasts that the number of persons in need of emergency food assistance will continue to rise.

“As we now know, we will have to budget for a longer period because a number of hotels are not going to reopen until October and cruise ships aren’t on schedule to begin sailings until the fourth quarter of the year. Additionally, with the economy not fully rebounding, we can expect we’re going to have a lot of issues relating to food,” Smith said.

To register for food assistance, persons can visit www.rapidbahamas.com to complete the online application.