Save The Bays, Waterkeepers: 7 Years of Urging, Calling Attention to Reality of Climate Change, Now Time to Act

Leaders of two of the nation’s strongest voices in the cry for attention to climate change are urging top educators to impress upon students that the time to act is now.

Save The Bays Chairman Joseph Darville and Waterkeepers Executive Director Rashema Ingraham have been meeting with principals and other educators throughout Grand Bahama for more than two weeks, imploring them to sensitize students to the reality of climate change. They have equipped them with scientific data about rising seas, warmer temperatures and stronger storms – and they have armed them with practical mitigation tools from the value of planting trees to preserving sand dunes.

“After living through and experiencing firsthand the effects of Hurricane Dorian, Save The Bays and Waterkeepers committed to working together and with other NGOs to sound the message to rebuild the coastal buffer zones that will act as natural defenses for our islands,” said Ms. Ingraham. In addition to talking with principals, teachers and administrators, Ingraham and Darville have led groups on field assessments, allowing them to see the changes along Grand Bahama’s coast.

“When Save The Bays talked about climate change in 2013 as one of the main priorities of the then new organization, it often fell on deaf ears,” Mr. Darville said. “Climate change seemed like a far-off thing, something we could worry about later if it didn’t fix itself.”

Two years later, in 2015, when he returned to The Bahamas after training with former US Vice President Al Gore who first sounded the warning in his now famous documentary An Inconvenient Truth, Mr. Darville still found it hard to convince Bahamians that the changing global climate was not an overblown scare tactic.

“I would tell people that the rising seas may one day make us boat people living on the sea not next to it and therefore we must learn to build boats, and they would pay little attention, thinking it was the rambling of an old man given to exaggeration,” said Mr. Darville, who holds certification in climate change reality leadership.

“Now when I talk about building boats, people get it. Our islands that we inhabit today were not here in ancient history. What we call The Bahamas was undersea and with rising sea levels and effects like stronger storms and higher tides, it is not inconceivable that we may be underwater again.”

The change in attention, say Darville and Ingraham, was a storm named Dorian that hovered over Grand Bahama for days in early September. Dorian broke every record, packing howling winds and rising waters that forced people out of their homes, flooded hundreds of buildings and knocked out infrastructure, including the Grand Bahama International Airport that resembled a lake with floating debris.

“We want to plant trees, but we also want to plant ideas,” say the leaders of both Waterkeepers Bahamas and Save The Bays. “The principals and educators we have been meeting with have been very receptive. We are ecnouraged that they are listening and saying, ‘What can we do?’ and we are able to say ‘Work with any environmental group, it does not have to be us. Every tree you plant, every coral reef you save, every step you to help mitigate against the threat of climate change can make a difference.’” 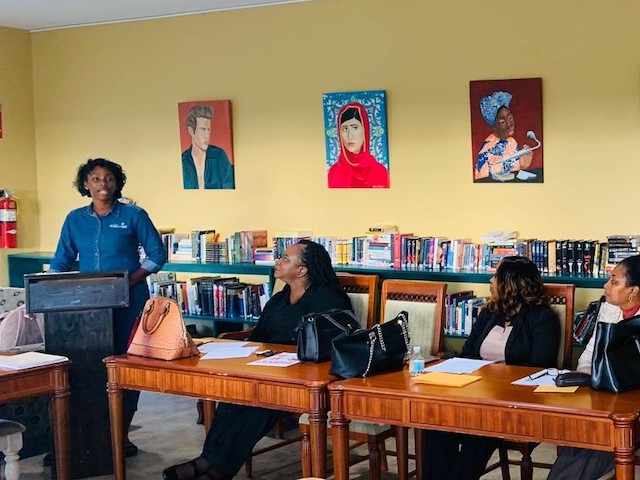 Waterkeepers Bahamas Executive Director Rashema Ingraham shares climate change data with Grand Bahama educators as the NGO joins forces with Save The Bays to urge principals and teachers to include climate change and mitigation in their curriculum in the wake of Hurricane Dorian and the reality of global warming and rising seas.