When Toby Smith set out to help his daughter with a school project he had no idea it would turn into restoring an iconic Bahamian sculpture.
While helping his daughter Bianca with a school project, Smith decided to restore Stephen Burrows' iconic metal sculpture, seen throughout The Bahamas, starting with the Conch.
The sculpture was one of several made by Burrows in the 1980s and 1990s to highlight Bahamian culture. His work can be found in Nassau, Exuma, San Salvador and Abaco.
The Conch was created in 1980 and was displayed on a roundabout near the airport in Nassau; however, it was removed once construction began on the roadways. The steel sculpture started to rust and was placed behind the Ministry of Works until Smith began his restoration project.
"I sought to try and find a company that could sand blast the shell, as a conventional sand blaster would not be able to remove all the filler and layers of paint," said Smith.
After realizing that the Grand Bahama Shipyard (GBS) was the only company in The Bahamas that had the necessary equipment to restore the sculpture and remove layers of paint, rust and fillers, Smith spoke to Reuben Byrd, vice president of operations at GBS.
"Mr. Byrd agreed to help with just one phone call, and never having met me, his willingness to help moved me deeply," said Smith, who owns and operates Bahamas Mosquito Fogging Company and took the project on as part of the company's "Giving Back Program".
Byrd compiled a dedicated team of four Bahamians to work on the Conch restoration project. The team has put a great deal of sweat, elbow grease and positive energy into restoring the conch sculpture to its former glory.
"When Smith explained that the sculpture was an icon in Bahamian history and made by a Bahamian artist, that was all I needed to hear," said Byrd.
The Conch shell arrived at the yard covered in layer upon layer of paint. The team at the shipyard ultra high-pressure washed the shell and blasted it down to the bare metal. Repairs were also made to the shell, as some deteriorated areas were discovered once the conch was stripped down. After the cleaning and repairs, the conch was shipped back to Nassau courtesy of Bahamas Ferries.
"We appreciate the opportunity to be a part of restoring a piece of Bahamian history. The shipyard strives everyday to be a good corporate citizen here on the island of Grand Bahama and all the islands of The Bahamas," said Byrd.
Other sculpture by Burrows include the Flamingo, Lobster, Rooster, Rat Bat, White Crown Pigeon, Parrot and the Pompey. Burrows also created the Triton Trumpet and Dragon, which were never publically displayed.
Smith plans to restore all Burrows' sculpture and help raise awareness of his incredible works of art.
Smith said: "It is a privilege to work with the Grand Bahama Shipyard and I believe that any company that has such principles in giving back to the community will succeed." 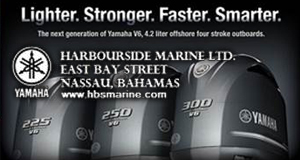