On a warm Bahamian night, twenty or so tourists gather around the pool at one of Exuma’s many second homes.

Amid colourful cocktails and soft island music, there is nothing seemingly unusual – they appear to be just like millions of other tourists that flock to these shores. However, this group is anything but typical.

“How much money have we raised so far?” someone shouts from beside the bar.

And just like that, these philanthropists raised $100,000 for the island of Exuma.

This was the scene last weekend when a group of Canadians, Americans and Bahamians participated in the 6thannual Tour de Turquoise, a charity cycling event that rolls up the spine of Great Exuma.

“This was a community effort, in every sense of the word,” Howard Chang says, the event’s chief organizer and a second home owner in Exuma.

“The money we have raised is fantastic, but it would not be possible without the support of so many different people. It was so inspiring to see this level of unity. Most importantly, we now have enough donations to truly make an impact on the island.”

Chang is part of a cycling group in Canada known as Les Domestiques, which is French for “The Servants”. Under the adage “Cyclists Who Serve”, this group of entrepreneurs and senior executives has generated more than $100 million for charities in Canada.

Meanwhile, in the Exumas, this same group, combined with American homeowners and locals, had already made a splash on the island. In past years, the event has helped purchase a hospital bus enabling residents without transportation to be able to reach the main hospital near George Town. They have also funded the restoration of basketball courts, and funded a cycling club at LN Coakley High School.

But this fundraiser blew those previous efforts out of the water. In the final tally, nearly $120,000 was raised for local causes, almost four times the previous record of $35,000.

“I have been a part of many fundraisers in The Bahamas, but I think this level of support is unprecedented, especially for Exuma,” Jeff Todd explains, Director of Marketing and Communications for GIV Bahamas Inc, the largest owner at Grand Isle Resort & Residences and one of the event sponsors.

Years ago, Todd, along with GIV Bahamas’ principal and longtime Exuma investor, Peter Nicholson, got behind Howard’s vision for Tour de Turquoise and helped found the event on the island.

“I keep coming back and keep giving more because the people on the island are so appreciative of what we do and we see the benefit directly in their communities,” Norbert Frischkorn explains, a six-time participant and donor.

So what does Tour de Turquoise plan to do with all these donations?

In consultation with the local high school, Tour de Turquoise will purchase a new bus to transport students on sports teams and clubs to practices, games and get them home at night.

With access to transportation sometimes a challenge, a dedicated bus will make a huge differences in the lives of students, Chang says. He also points out sports and clubs have never more important for students’ physical fitness and mental health.

In addition, Chang and others have reached out to local leaders in Exuma to establish a committee that will help decide how additional and future funds can be spent to achieve maximum impact.

“We want those that live in this community to tell us – what are the needs? Where can we make a difference?” Chang adds.

This sense of unity was on display during event. Leaving from Regatta Park last Saturday, a long procession of two police motorcycles, an ambulance, support vehicles and more than 30 cyclists all headed south in unison, including several riders from the local high school’s new cycling club.

The routes included a community ride of approximately 40km, along with a VIP ride to Williamstown and back, totaling more than 80km.

What it adds up to is not only a win for the island tourism’s product, but also a powerful a message on how events can also make a difference in the lives of Bahamians, says Todd.

To learn more about Tour de Turquoise, you can visit its website at rideforexuma.com. 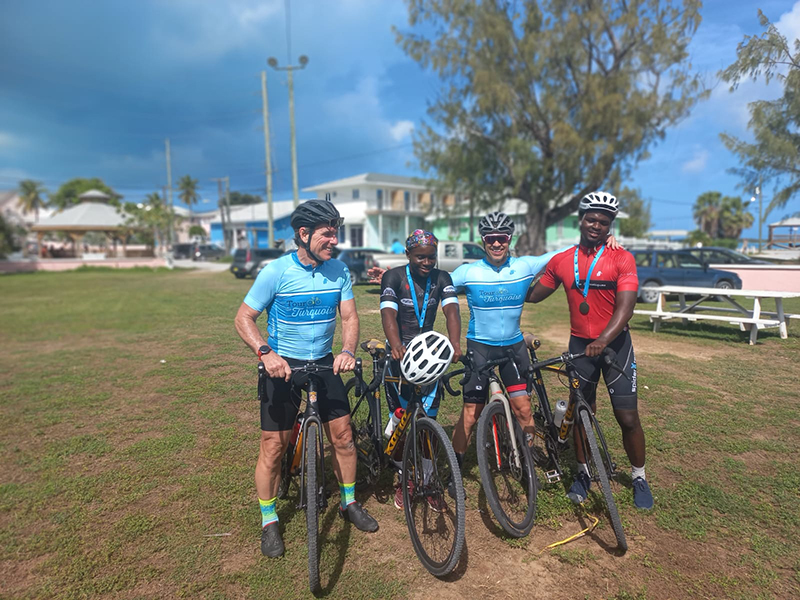