University of The Bahamas (UB) has joined the global effort aimed at raising awareness of the violence that happens against women, men and children and the need for collective, community action to stop it.

On Friday, UB launched activities to mark 16 Days of Activism Against Gender-Based Violence by hosting a symbolic ribbon-tying ceremony at the Oakes Field Campus. An orange ribbon is prominently displayed at the entrance. During the ceremony, several senior administrators and campus leaders called for an end to the heinous acts of violence that leave women, children and even men in the crosshairs.

“Our men are under attack by the crushing and fatal violence of murders taking place all across the country. Our women are being maliciously abused by husbands and boyfriends in broad daylight. Even our children, our innocent children, are victims of sexual assault and abuse,” said Vice President of Academic Affairs Maria Oriakhi.

“…To do nothing empowers and enables the abusers. To do nothing conveys the notion that such behavior in acceptable. While all acts of violence are unacceptable, brutal attacks against the most vulnerable – our women and children – which have increased at a staggering rate, as especially heinous.”

She called for communities to stand up and refuse to accept all forms of gender-based violence.

“It has been shown that our culture fosters [Gender Based Violence]. One of the key influences on culture is education. Thus, UB is in the position to be a leader in combatting GBV. We are the nation’s educators. We ask then, "How could we frame our content areas to address GBV?" said Dr. Butler.

“As we gather today in the spirit of unity, in the spirit of bringing to the fore the occurrence of and impact of this human rights violation -- gender-based violence, I assure you that the Academic Senate, the governing body of academics at the University, is committed to doing all that is within its authority to ensure quality academics, promoting scholarship, research, and creative works in an environment where GBV is not tolerated.”

She added that it takes the participation of each person to ensure that a culture of gender-based violence is not perpetuated.

Similarly, the President of the Student Government Association Arthurnique Jones, who also participated in the ribbon tying ceremony, pledged the collective support of the student body.

“The Student Government Association vows to be an organization that will continuously advocate for the protection of women especially for the thousands of female students that walk this campus,” she said. “It is my hope that the tying of this ribbon is not just the tying of a ribbon. but a pledge to stand up for the safety of our women and children.”

Chair of the UB Alumni Association Jazmine Romer-Rolle said the perpetration of violence against men must also not be overlooked.

“It is our hope that over the course of the next 16 days, more eyes will be opened, more tough conversations will take place and true change will be sparked. Now is the time to bring an end to the suffering,” she said.

UB has scheduled a series of activities to engage both its University community and the public around the theme of stopping gender-based violence. These include a series of panel discussions, poetry readings, self defence classes and a special appeal for donations to the PACE School, a special programme for teenage mothers unable to complete traditional school due to pregnancy. 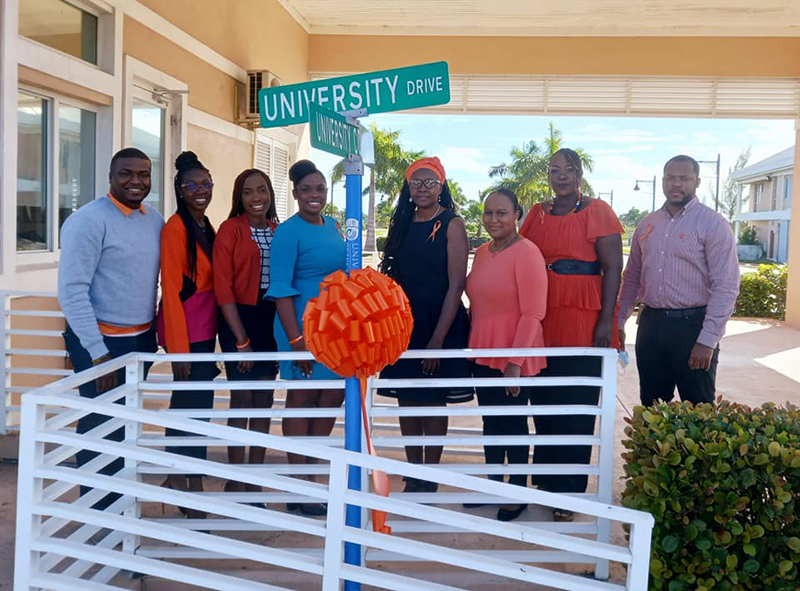