"In Memory Of Them" - Yesterday's heroes shaped 2 generations

A eulogy is the closest written record for people to remember you if you have not written an autobiography. The newly launched collector’s book, “In Memory Of Them” shares a glimpse of sixty-seven outstanding individuals and residents of The Bahamas through eulogies and tributes that were written by Dr Reginald W. Eldon.

These short eulogies of “Them” had transpired over Eldon’s forty-four years of service in the Methodist Church. Centered around family members and friends who played an important role in his life, there are tales of adventures, hardships, pain and joy; told in an intriguing manner that keeps you reading.

“It takes a very special gifted individual to get to the heart and soul of a deceased person,” stated Susan L. Roberts in the book’s Forward. “He writes with passion and has a masterly talent for expressing his feelings and emotions. Reg filed the eulogies and tributes he has given…so that we can benefit, and reflect, as we read his collection.”

“In Memory Of Them”” was launched on the 100th Remembrance Sunday in November 2021 at Ebenezer Methodist Church. A tribute from former Governor General H.E. Sir Arthur Foulkes also an author stated, “It is so important that we record and tell our stories which together are the stories of the people…a nation. I believe that this book will not only memorialize some very interesting Bahamians but also that we will draw inspiration from it to sweeten our own lives.”

Inherently in The Bahamas when we meet someone we tend to ask, “Who are your people? Where are you from?” “In Memory Of Them” features people from all walks of life connected by marriage, professional lives, church or other ways.

She had joined the Symonette-Eldon family in The Current when she married widower Ferris Weech who was the brother-in-law of Reg Eldon’s mother Ruth. Sir Durward Knowles was a Bahamian icon and Olympic medalist who died 3 months after his 100th birthday. Although his life is well documented, Eldon managed to offer a new perspective on his life, focusing on his philanthropic spirit.

Margaret, Lady Symonette (Sir Roland’s Wife) (1915-2002) was a Canadian nurse who was widowed. Sir Roland Symonette was enamoured with her when they first met, and they married. She played a large role in his life, championed many causes in The Bahamas, and was a matriarch to her family.

There are endearing stories told by her sons Craig and Brent that are included in her eulogy. Sir Roland’s niece Rhoda C. Symonette (1922-2002) sister to Ruth Eldon née Symonette (1924-1985) and aunt to Eldon, played a significant role. She understood her nephew when he performed funerals for the neighbour’s pets as a young boy and encouraged him to work with youth and continue his journey into Ministry. Later in his adult life, friend, Vanny Johnson gave Eldon the title, “Minister of Funerals.”

Other connections to “Them” include many off-springs. Merle Gibson (1915-2003) who was born in Savannah Sound was the mother of former Queen’s College principal, Andrea Gibson who was the first female and first person of colour in that role. Merle passed away at the age of 88.

Admirably, Fredricka Rosetta Symonette (1905-1997) who died at the age of 92 was the earliest born person. She was affectionately known as Miss Freddie and provided care for the Methodist Ministers serving in South Eleuthera. Fredericka’s nephew is John Gomez, CEO of Cable Bahamas.

Some younger people in the book include Terence C.A. Bethel (1958-2020) who was an accountant and worked with youth and gave service to his community. His promising political career was cut short in his 58th year. Another was Joseph Robison (1959-2005) who had established the Ashé dance troupe that travelled throughout The Caribbean. He was an advocate for HIV/AIDS education in the 1980s; he died at age 47. There is also a story of a mother who lost two of her children: Theotis Johnson (1977-2005) and Margo Gibbs (1970-2018).

“I had the privilege of officiating at the funerals of two of Mrs Agnes Johnson’s adult children,” said Eldon. “Her son Theotis, 28 and thirteen years later her daughter Margo Gibbs, 48. I will never forget her pain.”

Eldon shared that he too had moments of tears, sometimes crying his way through hours of preparation of a eulogy for a family member or close friend, right up to the time he was due to speak at the pulpit; he would then gain his composure and deliver their eulogy.

Long-time friend Philippa Brown-Papadopoulo who had recently read Eldon’s book emailed him this message: “Your talent for eloquent expression shines like a lighthouse…Like a magnet to steel, I am drawn to each memoir and my heart is filled. Your voice, its tenor and cadence, come through loud and clear in my mind bringing back wonderful, difficult, but precious memories.”

“In Memory Of Them” creates a fleeting nostalgia. The 67 individuals will be remembered for their contributions to their families, church, community and country. The majority were born in the early part of the 20th century with most living to see an Independent Bahamas. They experienced the adversity of World War I and WWII, economic hardships, and hurricanes yet tenaciously led by example. These were the heroes whose ideals of character, ethics, hard work, service and gratitude, helped mold and shape two generations.

“In Memory Of Them” can be ordered by emailing Dr Reginald Eldon at regweldon@gmail.com. 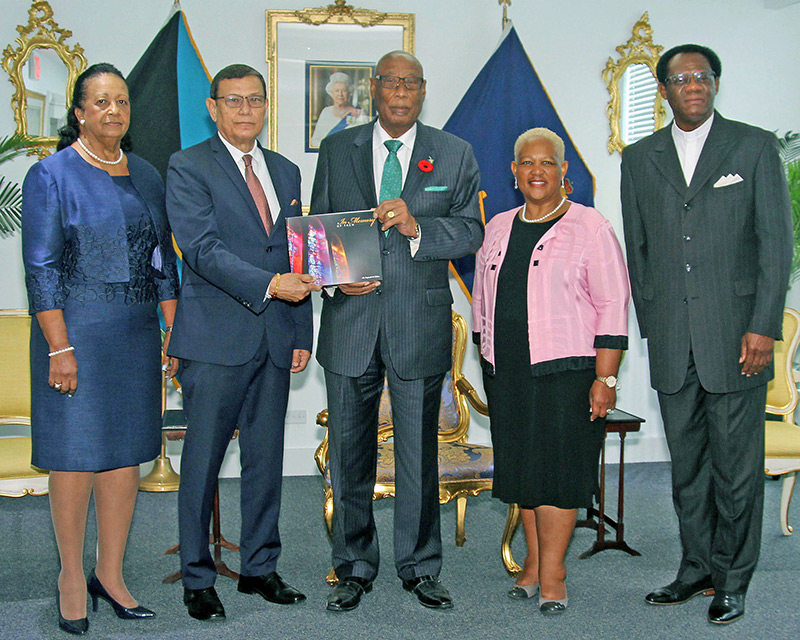