The Governor-General’s Volunteer Bahamas Program was officially launched December 18, 2020 by His Excellency Sir Cornelius A. Smith in a ceremony that honored some 13 individuals and organizations.

The ceremony was held at the C.A. Smith Building.

His Excellency said he was delighted to be back home in Grand Bahama, and thought that, one day, history would record this day as a defining moment in Volunteer Bahamas.

Two weeks ago, The Governor-General’s Volunteer Bahamas Program was launched in New Providence. The program exists to encompass, encourage, and celebrate those people as well as civic and charitable organizations, associations, clubs and groups that significantly and generously contribute through volunteering without seeking reward.

He said, “For as long as I can remember, it has been a dream of mine to bring volunteers from all across the islands with the sole purpose of bridging the gap that exists between those in need and those who are able and willing to fulfill those needs.”

There are many who would wish to volunteer in some way, but do not know how and so this is a way to bring people together to meet this need. The program is designed to inspire, coordinate, and recognize the work of volunteers.

“We are renowned for being a giving people. And so, I am encouraged by the work of hundreds of volunteer organizations involving thousands of Bahamians who unselfishly give of their time in the molding of human personality and in the building of our communities.

“We are especially inspired by the work of the army of Bahamian volunteers who regularly support humanitarian efforts, organizations like the Red Cross, the Salvation Army and all the various networks that feed, clothe and house members of society who are in need. We recognize them, we commend them, and we applaud them for the efforts they have given on behalf of their fellowmen.

“We commend the many NGOs such as Rotary, Kiwanis and all like-minded groups that continue to positively impact the lives of so many Bahamians through their generosity.

“Here in Grand Bahama, we’ve to recognize and applaud the significant works of many Bahamians in our community who have outreach programs inclusive of development of our youth marching bands, the training and coaching in various sports such as basketball, baseball, swimming, tennis, volleyball and athletics.”

There are some, he continued, who are making real contributions in their respective communities as well as those rendering unselfish service in all walks of life and in unexpected places.

For too long, the work of brave and selfless volunteers has gone unrecognized but that was changed today, as ordinary citizens are being recognized.

The honourees were presented with awards given by the Governor-General, or by Barry Rassin, chairman of Volunteer Bahamas.

Giving brief remarks prior to introducing His Excellency, Minister of State for Finance and for Grand Bahama, Senator the Hon. J. Kwasi Thompson said he felt emotional looking around and seeing the volunteers and what they represented to the island, he thanked the Governor-General for the suggestion that the volunteers in Grand Bahama be recognized appropriately.

The Minister recalled Hurricane Dorian when, at the bridge in the morning, all they could see were tops of houses. There were those who had “the courage to take the jet skis out and tie themselves together to go out and rescue those who were trapped.”

He added that he remembers the joy of finding out that Minister Michael Pintard, his wife and child had also been rescued. “And you stood there all day long until everyone came back.” Minister Thompson thanked the five Rotary Clubs on the island for their continued assistance from the delivery of water immediately following the storm to the assistance with rebuilding, as the efforts continue.

Also in attendance was the Minister of Agriculture and Marine Resources, the Hon. Michael Pintard; Harcourt Brown, permanent secretary in the Office of the Prime Minister who also served as Master of Ceremonies, and other senior officials. Due to safety protocols of COVID-19 pandemic, the number of people attending the ceremony was limited.

Lindy Russell and Stephanie Burrows were thanked for their contribution to young people and those throughout the community.

Those receiving gold awards were D’Sean Smith (accepted by his sister Delicia Smith), Jensen Burrows and JaAlbury for their volunteering to rescue those trapped during Hurricane Dorian last year..

The other honourees were presented silver awards. HIS EXCELLENCY the Most Hon. Sir Cornelius A. Smith, Governor-General, and Lady Smith were present on Friday as the Governor-General’s Volunteer Bahamas Program was launched in Grand Bahama. The program was commenced two weeks ago in Nassau. (BIS Photo/Lisa Davis) 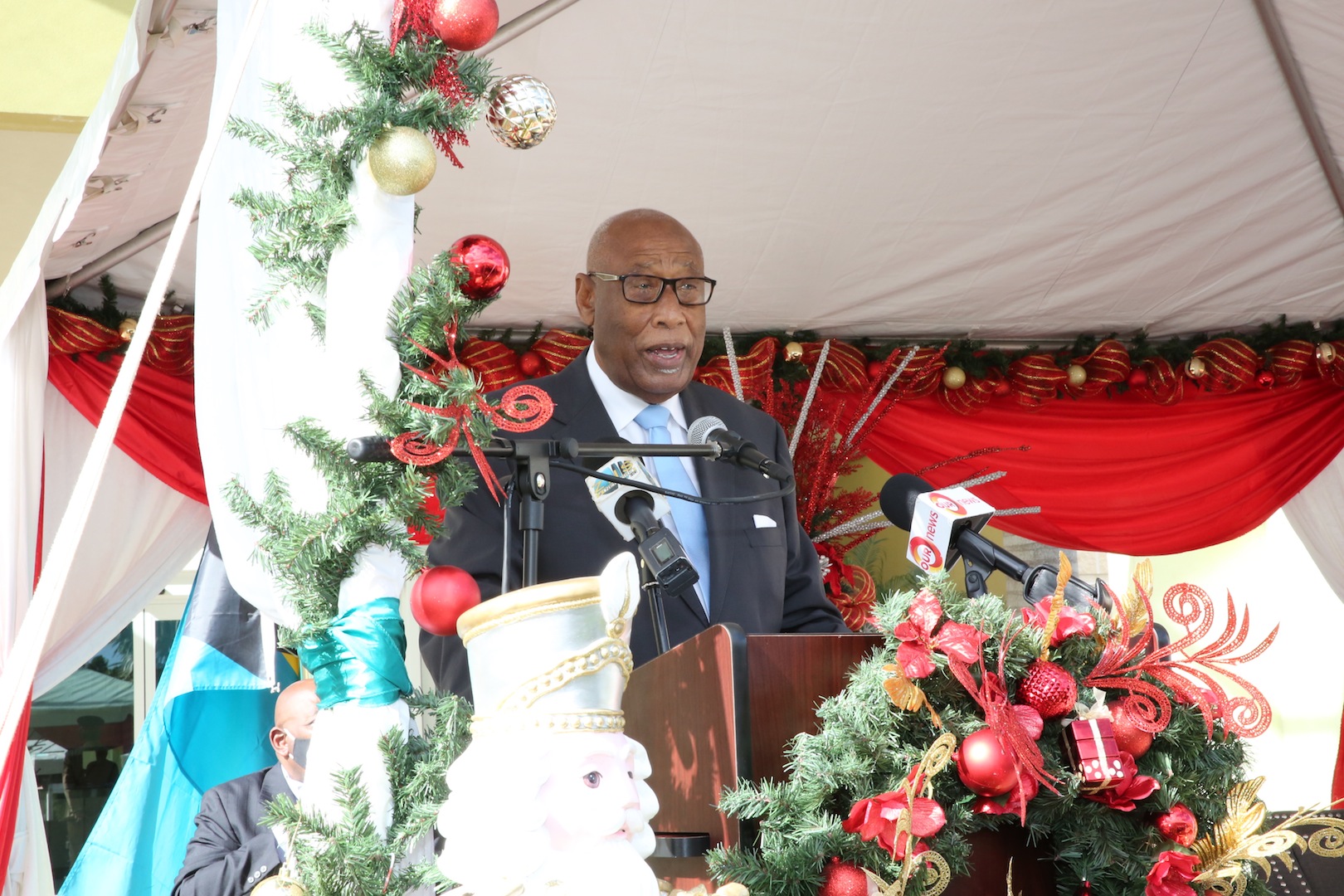 AWARDS CEREMONY – The Governor-General’s Volunteer Bahamas Program was officially launched in Grand Bahama on Friday, as many of those who give selflessly were honoured for their efforts. Shown are Minister of Agriculture and Marine Resources, the Hon. Michael Pintard and Minister of State for Finance and Grand Bahama, Senator the Hon. Kwasi Thompson, along with the honourees. (BIS Photo/Lisa Davis)