Pauline Davis , the Bahamian icon who once conquered the sprinting world, is about to get her own book with a major US publisher.

This country’s original “Golden Girl” signed a book deal with US publisher Rowman & Littlefield earlier this week, a move that will bring her remarkable story of resilience, determination and Olympic glory to the world.

Dramatic and unflinching, Davis’ upcoming memoir, entitled “The Girl Who Ran Sideways: The Story of an Olympic Champion”, will be co-written with noted Canadian author T.R. Todd, who recently penned the award-winning book “Pigs of Paradise: The True Story of the World Famous Swimming Pigs”.

Raised on Fleming Street, in Bain Town, Davis would defy the odds to not only become a double gold medalist, but the first woman from the Caribbean to take home the ultimate Olympic prize. It tells the story of a girl who was plucked from obscurity to become one of the most decorated female sprinters of her generation, and the first woman of colour to join the World Athletic Council, the international governing body Track and Field (formerly known at the International Association of Athletic Federations (IAAF).

“It is with absolute excitement that I can announce the upcoming publication of my book,” Davis says, who won her two gold medals at the Summer Olympic Games in Sydney, Australia in 2000— and a silver medal in Atlanta in 1996.

“At the end of the day, I am a product of Bain Town in Nassau. I was never meant to make it this far. From The Bahamas to the world, I hope my story inspires Bahamians and people from all walks of life to reach for their potential and never give up.”


With an expected release date in early 2022, The Girl Who Ran Sideways describes in raw detail Davis’ upbringing in Bain Town, without power or electricity. Every day, she carried the family’s buckets to the Government Tap to fetch fresh water.

It was there she learned to run sideways, sprinting barefoot from bullies —it was the only way to get the buckets of water home, without spilling.

Neville Wisdom, a seasoned track coach with the Bain Town Flyers Track Club, couldn’t believe his eyes when he saw this poor little girl, barefoot, sprinting down the track sideways on a grainy video tape recording. But he also saw something else. He saw the heart of a champion.

“While we’ve known each other for years, it was only recently we finally came together and decided to write this book. Every aspect of her life is incredible and defies expectation. I hope this book is something the entire Bahamas can be proud of. But beyond that, it’s an opportunity for the whole world to know The Bahamas on a more intimate level, through the eyes of the original Golden Girl. In these challenging times, this is a story of perseverance that we all need."

Davis, who competed in five Olympic Games, first burst onto the international track and field scene in 1982 with her historic run at the Central American and Caribbean Junior Championships (CAC) in Barbados, capturing four gold medals in the 100M, 200M, 400M and long jump. Later, in 1984, she forever endeared herself to the Bahamian public with her legendary performance at the 1984 CARIFTA Games in Nassau.


Despite a serious hamstring injury just months before, Davis won the 100M and 200M. Then, as the anchor of the 4X 400 relay team, she flew past her competitors in dramatic fashion to secure the gold and defeat the Jamaicans in the CARIFTA games, on route to winning the Austin Sealy Award for Most Outstanding Athlete in the Caribbean.


It would only be the beginning of a decorated track and field career spanning 20 years, ending on September 30, 2000, when the “Golden Girls” —Eldece Clarke, Debbie Ferguson, Chandra Stirrup and Pauline Davis —defeated the Americans to win the 4 X 100 relay, bringing home the country’s first gold medal.


“I could not have accomplished what I did without my Golden Girl sisters,” Davis adds. “While we did not always agree, they pushed me and together we made history. So I want to share this book with them. This story needs to be told.”


It was a historic year of firsts for The Bahamas. In that same Olympics, Davis would also win the silver in the 200M, which would later be upgraded to the gold after American sprinter Marion Jones was stripped of her medals for doping. Years later, she would make history again as the first woman of colour to be elected to the World Athletic Council.

While inspiring and exhilarating, The Girl Who Ran Sideways is also a candid portrait of Davis’ personal struggles to become the best in the world.

Whether it was the separation of her parents, the racism she experienced at the University of Alabama, her two lifetime suspensions (both rescinded) from Bahamas Athletics, or the classism and political victimization she endured along the way, Davis' path to success was also littered with hardship.

“In this book, I want to speak truth to power,” Davis adds.

“There were many things that happened to me in my life. I’ve experienced my fair share of tragedy and struggle. When people read this book, I hope what they take away from it that success is not an accident. It takes work —hard work —and perseverance to reach your dreams.”


In these difficult times, The Girl Who Ran Sideways reminds us that it doesn’t matter how you start off in life—it’s how much you finish. 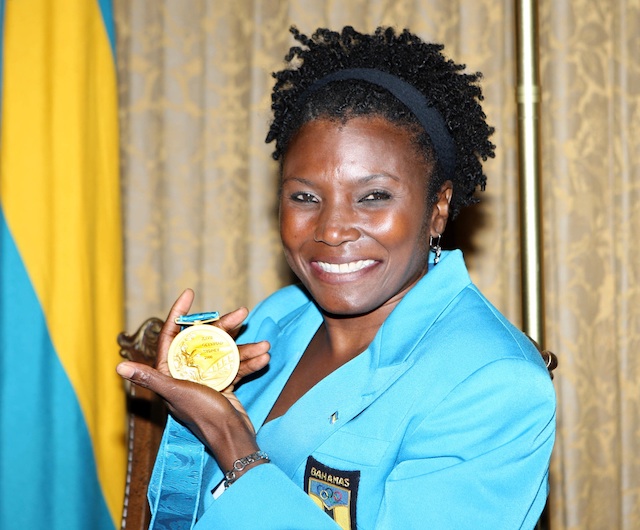 PAULINE DAVIS GOLD: in 2010, after 10 years of waiting, Pauline finally received her gold medal for the 200M at the 2000 Summer Olympic Games in Sydney after US sprinter Marion Jones was stripped of her medals for doping. Credit: Nassau Guardian 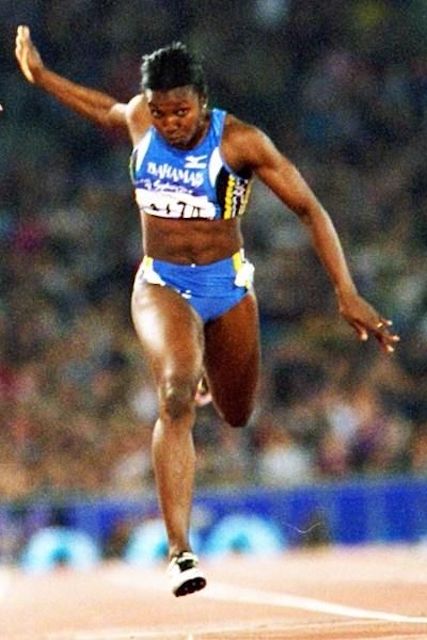 PAULINE: Pauline Davis would defy the odds to not only become a double gold medalist, but the first woman from the Caribbean to take home the ultimate Olympic prize. Credit: Stock Image