In the last year, three Abaco natives have faced property destruction inflicted by Hurricane Dorian, a cancer diagnosis, and now, the heightened safety risks associated with the COVID-19 pandemic.

Elladice Murray, Gwendolyn Baillou, and Karen Lighbourne, who were once only cordial acquaintances, are now meaningful pillars of support in each other’s lives.

Fifty-three-year-old, Treasure Cay resident Elladice Murray maintains a steady grasp on positivity despite every challenge. As a beauty specialist for over thirty years, Hurricane Dorian also put a pause on her homebased business.

During a regular checkup two months after the storm, Elladice was notified that a lump found in her breast was possibly cancerous. This was confirmed in January 2020 when she got a call saying she was in the early stage of cancer and was presented with the choices of radiation or a mastectomy. In March of this year, she chose to have the latter, ultimately having both breasts removed.

Hours after the operation, Elladice was able to access a phone and gave her family members and friends a call. She recalls them asking ‘why’re you on this phone and why you sound so happy?’

Family and friends were puzzled as to how she maintained such high spirits and a positive outlook on life. For sure, many in her position would be the opposite, they thought.

“They were surprised and shocked at how I sounded because most people after an operation sound down.”

However, Elladice recognizes that cancer is merely a medical diagnosis, not a definition of who she is or what she can do. She witnessed her mother in the fight against cancer and attributes her positive attitude to the strength that was displayed.

Elladice has completed four rounds of chemo and, after being in Nassau since February, is able to complete her medical checkups at the Cooper’s Town Clinic in Abaco.

“Through it all, despite chemo and a couple of bad days, I thank God for his grace and mercy. Him, my family, and friends all kept me sane. I never once let it get to me,” she said.

Gwendolyn is the ‘baby of the bunch’. As she celebrated her 50th birthday in July, she also marked the completion of six rounds of chemotherapy. In recalling her ongoing journey, Gwendolyn advises persons in her position to “not fret and do not fight alone.” Her mother also battled cancer and finding this out in the later stages inspires her to speak out even more.

“Plenty persons have cancer but they don’t want to talk about it or say anything, but this doesn’t make sense. You need support; you need friends and people to help. Put your hesitations aside and talk to somebody. Support is what it’s all about.”

Gwendolyn found out she had cancer after facing two falls. She recently went from having chemotherapy treatments every three weeks to weekly and she encourages cancer patients to not remain tied down to the bed or couch. “Get up in the morning, exercise, and eat healthy. Build yourself up,” she said.

Since the age of 15, Gwendolyn has worked as a bartender and waitress in resorts spanning the entire island of Abaco. She has also remained committed to her community. Prior to traveling to Nassau for her medical appointments, she assisted with many independent initiatives, which included the preparation and distribution of meals after Hurricane Dorian.

As the COVID-19 pandemic continues, the trio’s need to take added precautions has increased. In Gwendolyn’s case, family members closest to her are deemed ‘high-risk’ due to their occupations. This has meant strict physical distancing.

Also incurred during the pandemic are costly COVID-19 tests. This follows added bills brought on by the house damages sustained due to Hurricane Dorian. Elladice and Gwendolyn both experienced roof damages and Karen’s home was totally compromised.

In contrast to Elladice and Gwendolyn, Karen has so far opted not to have a mastectomy. She is now on her eighth round of chemotherapy since March and has remained in Nassau, as the treatments are not available in Abaco.

“Through it all, it gets better. I’ve been down, but not out,” she said.

Karen understands that there are many myths surrounding cancer and that most persons see the diagnosis as a death sentence. She remembers being a bit uneasy and worried when the pandemic first started and the number of confirmed cases grew. However, those feelings were relaxed as time went on. With an optimistic attitude, Karen takes it “one day at a time.”

These women are symbols of friendship and hope for one another. Both Gwendolyn and Karen frequented Elladice at her then homebased beauty salon, but those shared times cannot be compared to their frequent chats during medical appointments. It is during these times when they encourage and support each other most.

The trio emphasized that God has continued to keep them as they push forth. In fact, Gwendolyn said, “He keeps us so we can tell our story. The cancer community needs to know they are not alone.”

For the last eight years, CIBC FirstCaribbean has committed to raising funds for the provision of care and counselling to cancer patients- like Elladice, Gwendolyn, and Karen- and their families, and raising awareness through education campaigns. The $70,000 in donations raised during Walk for the Cure 2019 was presented to eight cancer organizations across The Bahamas. The Abaco Cancer Society received $12,000, a record amount for the organization.

In addition to the local event, the regional walk this year will be a virtual one taking place on Sunday October 4 at 4p.m. Eastern time. It will see the usual fundraising and pre-walk activities in each territory taking place online and via social media, before culminating with a Virtual Walk and Concert of Hope featuring leading entertainers from across the region. 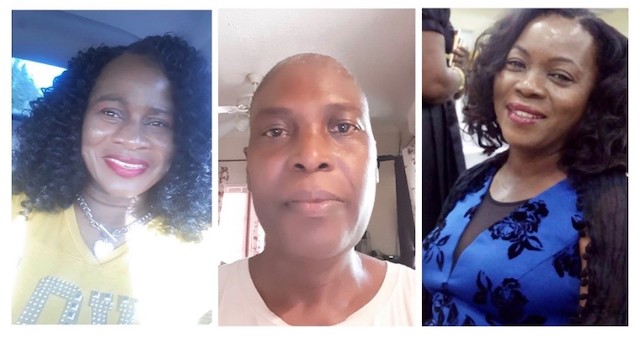 Three Abaconians lean on each other for support as they face the effects of Hurricane Dorian, cancer, and now, COVID-19. L-R: Gwendolyn Baillou, Elladice Murray, and Karen Lightbourne

About CIBC FirstCaribbean
CIBC FirstCaribbean is a relationship bank offering a full range of market leading financial services through our Corporate and Investment Banking, Retail and Business Banking and Wealth Management segments. We are located in sixteen (16) countries around the Caribbean, providing the banking services that fit our customers’ lives through approximately 3,000 employees in 68 branches and offices. We are one of the largest regionally listed financial services institutions in the English and Dutch speaking Caribbean, with over US$11 billion in assets and market capitalization of US $2 billion. We also have an office in Hong Kong. The face of banking is changing throughout the world and CIBC FirstCaribbean intends to lead these changes with the expertise, integrity and knowledge gained from banking in the Caribbean since 1836. CIBC FirstCaribbean is a member of the CIBC Group. CIBC is a leading Canadian-based global financial institution with 11 million personal banking and business clients. Through our three major business units - Retail and Business Banking, Wealth Management and Capital Markets - CIBC offers a full range of products and services through its comprehensive electronic banking network, branches and offices across Canada with offices in the United States and around the world.