Prime Minister the Most Hon. Dr. Hubert Minnis officially welcomed Commodore, Dr. Raymond King as the eighth Commander of the Royal Bahamas Defence Force during a Change of Command Ceremony on Thursday, May 21, 2020.

During the military ceremony held at HMBS Coral Harbour base, the Prime Minister also thanked outgoing Commander, Commodore Tellis Bethel for his “dedicated leadership and devoted service in helping to maintain the peace and security of our nation” during his long career on the RBDF.

Before the official acknowledgement as Commodore, Dr. Raymond King, 52, previously served as the Defence Force’s Deputy Commander and Acting Commander, and as Port Controller of The Bahamas.

“This experience affords him a wealth of administrative and operational experience,” the Prime Minister said.

Following his formative education experience, Commodore Dr. King obtained an Associate’s of Science Degree in Accounting Management, A Bachelor’s of Arts Degree in Administration and Accounting, a Master’s of Business Degree, and a Doctorate of Education Degree in Leadership and Management.

Serving on a number of national boards and committees, Commodore Dr. King also served as the Admiralty Marshall for the Commonwealth of The Bahamas, and trained at international naval institutions such as the Britannia Royal Naval College, the Inter-American Defence College, the United States Naval War College, and the Maritime and Port Authority of Singapore.

“Your service as Commander comes at a critical time for our nation, especially during the COVID-19 pandemic,” the Prime Minister told Commodore Dr. King. “You have assumed command as the nation is still in the reconstruction phase in Abaco, the Abaco Cays, and Grand Bahama after one of the most powerful hurricanes ever in our region.”

The Prime Minister observed that the country would rely on Commodore Dr. King for his experience, commitment and leadership during these extraordinary times. 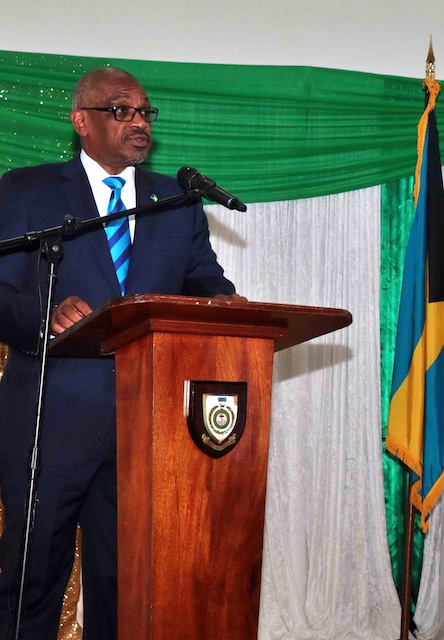 “You must continue to set the standard of excellence in leadership, integrity and innovation in guarding our heritage and protecting our borders,” the Prime Minister said. (BIS Photos/Eric Rose)