A $250 million development that will inject new life into Paradise Island creating a live, work, play community with luxury condominiums, dining, retail, office space and a new superyacht marina is ‘on budget and ahead of schedule,’ according to developer Sterling Global.

“Thanks to an incredible team, the Sterling Hurricane Hole project, including Sterling Commons, is on budget and ahead of schedule -- a dream place to be any time you are in the midst of a project of this magnitude,” said Bill Green, President of Sterling Developments.

“After the music stopped and the festivities died down, we began work immediately and the pace has been steady. No more pomp, just a lot of performance on the ground and the promise is coming true, rising out of the ground and now up to the third floor,” said Khaalis Rolle, President of Sterling Advisory Services.

According to Green and Rolle, the progress report is even more impressive given that the goal was to complete the 10-year mixed-use project in half the time.

“On any given day, we have about 120 workers on site,” said Rolle, “and thanks to our construction management team headed by Nick Mamo, coordination has been superb.” 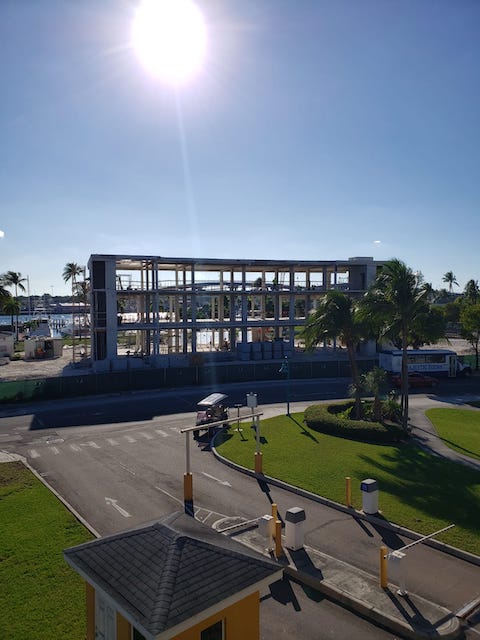 The sun is shining on a live, work, play development on Paradise Island where developer Sterling Global says construction of Phase One, Sterling Commons, is on budget and ahead of schedule. Groundbreaking was in January and the building is up to third floor with 80% of retail space pre-leased.

Located along Nassau Harbour adjacent to the eastern Paradise Island bridge and running east to the Warwick Hotel, the sprawling development was once slated to be high density, high-rise residential. Under Sterling’s plan that was warmly received and applauded at a Town Hall meeting in 2018, the mixed-use development is lower in density, provides for extensive green space and includes a combination of luxury residential, professional office space in two of five buildings, basic and luxury retail and services, and world-class fine and casual dining. Occupying centre stage will be a totally renovated superyacht marina designed to attract the world’s largest and most sophisticated yachting population.

“The landmark Hurricane Hole Marina will be restored to meet the requirements of today’s super-yachts while taking great care to maintain, and wherever we can, improve the surrounding or adjoining marine environment,” said Rolle. “We are committed to taking great care with the waters not only because it makes good business sense, but because it is the right thing to do. We know that we are just borrowing this land and these resources and it is our role to protect and preserve for future generations.”

According to Sterling, 100% of the office space in Phase One, Sterling Commons is leased along with 80% of the retail space. Among the businesses going in is a yacht charter company, pharmacy, hair salon, with an anchor tenant to be announced shortly. 700 Wines & Spirits has already announced it will have two locations in the Commons. Sterling Commons is slated for completion and occupancy December 2020.

Marina view of Sterling Global Financial’s construction of Phase One “Sterling Commons” development on Paradise Island. Each of the residential units will have marina access. The development is up to 3rd floor and is ahead of schedule