According to recent studies, more than 800 million people around the globe are impacted by rising global temperatures. From droughts, floods, and heatwaves to devastating hurricanes brought on by warming oceans, planet earth is in dire straits. With more attention than ever on the environment, the Bahamas Ministry of Environment and Housing today announced a nationwide competition to drive environmental stewardship through community beautification.

The campaign, taking the popular Be A Hero from the classroom room to community associations, is being conducted in partnership with Royal Caribbean Cruises Ltd. which is providing the $10,000 prize money for the best sustainable beautification project undertaken by a non-profit civic organization or association.

“We are very proud to unveil the second phase of our Be A Hero community improvement initiative, challenging clubs, associations and organizations to take on a project that is sustainable and beautifies a community of their choosing in one of three ways,” said Minister of Environment and Housing Romauld ‘Romi’ Ferreira. “The first category is beautification so a community association may take on creation of murals, or clean up and ‘green up’ a park or open space, perhaps planting and beautifying the area, inclusive of a maintenance plan. The second category is beautification by recycling, converting parts of abandoned vehicles, appliances or other unwanted detritus into artwork and removing the remainder. The third category is creation of a water feature and we will be looking for one that allows neighbourhood children, in particular, to use in the heat of the summer as a cooling station and for all to enjoy. Sustainability of the project will be an important part of the judging.”

According to Ferreira, the project is a first of its kind. “There has never been anything quite like this where we are saying, we will pay you to make your community better, greener, cleaner, more pristine than it is, and we want to thank Royal Caribbean for coming onboard in this partnership. The cruise line is known for its environmental stewardship and did not hesitate to support this national effort when approached.”

The community appeal, launched by the minister at a Kiwanis Club of Cable Beach meeting November 13, follows the lively Be A Hero program at the school level, an initiative aimed at instilling in students the need to take personal responsibility for their surroundings.

“If we want to change the tide for our planet we thought it most important to reach future generations of Bahamians who will in time inherit and care for this land, so we began with students as young as five and six years old,” explained Ferreira.

Over the past year, the initiative, supported by an impressive list of corporate sponsors as well a cadre of the country’s national sports, entertainment and civic heroes - from Shaunae Miller-Uibo to Jonquel Jones, Chris ‘Fireman’ Brown and Buddy Hield to Kirkland KB Bodie, Wendi and Dyson Knight, Ed Fields and Nancy Kelly - helped transform ordinary students from across the country into bona fide heroes. Launched in October of 2018, the campaign encouraged students to become environmental advocates by creating projects to clean up and beautify their respective schools and communities.

Throughout the campaign, the minister and his team visited 19 primary and junior high schools in New Providence, sharing information and inspiring thousands. During each visit, they focused on the importance of protecting the earth’s natural resources and challenged students to do their part to protect mother earth. Students and schools were encouraged to post their projects online and drum up support on social media. Winning entries were judged on creativity and impact. During a ceremony hosted by Atlantis, Ferreira and his team crowned Adelaide Primary School and St. Cecilia Catholic School as the overall winners, with two students from St. Cecilia and one young boy from Abaco walking away with individual hero honours.

“On the heels of a successful school campaign, we’re excited about the interest already expressed in the community phase of the initiative,” noted the minister. “We’re hoping to see the adults follow the excellent example set by our young heroes and help us create cleaner, greener, safer communities that we can all enjoy.”

Minister of Environment and Housing Romauld ‘Romi’ Ferreira announces the launch of Be A Hero Community Challenge, taking the popular campaign aimed at environmental stewardship and neighbourhood beautification from the classroom to the community association level with a $10,000 prize provided by Royal Caribbean Cruises Ltd. for the best sustainable project. 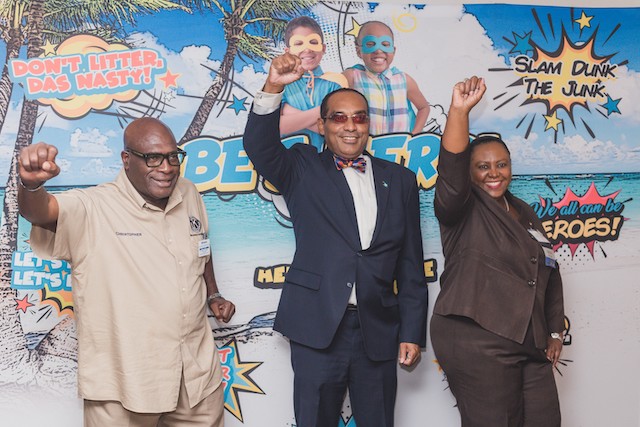