Teddy Bears for Children in Shelters

Her Excellency Mrs. Clara Smith, wife of the Governor General, along her daughter-in-law Charlene Smith, and Kim Sawyer, Deputy Director, Department of Social Services presented children, who were displaced by Cat 5 Hurricane Dorian, with teddy bears at their shelters, September 18, 2019.

The initiative was spearheaded by seven-year-old Caitlyn Boyer, great grand-daughter of Their Excellencies, the Most Hon. Cornelius A. Smith, Governor General, and Mrs. Clara Smith, and grand-daughter of their son and his wife, Clayton and Charlene Smith of Freeport, Grand Bahama.

Caitlyn, wanting to bring a little happiness to those children who were displaced by Hurricane Dorian, collected 500 Teddy Bears within the United States to present to children whose lives had been disrupted by the storm.

The officials of NEMA and the Department of Social Services welcomed "this bit of cheer."

Shelters receiving Teddy Bears were Kendal G.L. Isaacs Gym, Bahamas Academy Gym and Fox Hill Community Centre. The balance of the toys were to be distributed to remaining shelters, and children's homes. 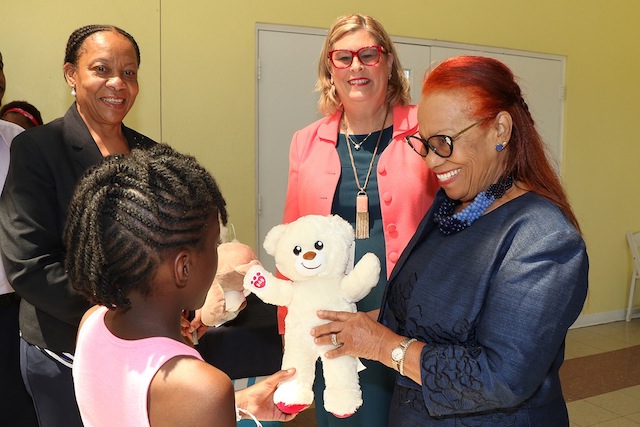 HE Mrs. Clara Smith, Charlene Smith, and Kim Sawyer are pictured with the children.