At the invitation of Rotary International (R.I.) President Barry Rassin, Celebrity Artist and Rotarian, Jamaal Rolle was asked to paint two “End Polio Now” creations at 10 minutes each before a live audience. The artist added a surprise twist by creating his work of art, upside-down to the delight of everyone.

It was a race with the clock, it was pure energy and fun of what materialized on stage that had the audience of 25,000 persons from around the world in suspense which turned to admiration of the artist’s charm and talent.

Rolle started with a blank canvas painting most of it upside-down. The finished painting revealed a little boy receiving a drop of the polio vaccine. It later auctioned for €11,000 (US$12,450.00).

The second painting of a little girl receiving the polio vaccine had a bit more flair with the artist brushing and moving energetically as he once again painted the scene upside- down, this time for the entire 10 minutes. When turned around, the artist invited the Rotary President to brush the famous words, “End Polio Now.” That painting fetched €8,000 (US$9,065.00).“

“This was an important experience for me not only because I was able to represent The Bahamas in Germany at this 110th Rotary Convention, I was also able to offer my talent to a worthy cause,” said Rolle who is a member of The Rotary Club of East Nassau in The Bahamas, the same club as R.I. President Barry Rassin. “I was just 5 years old when Rotary launched the PolioPlus program to eradicate Polio – an age that all children should.

Thank you so much for participating in our Convention in Hamburg,” wrote R.I. President Barry Rassin in an email to Jamaal Rolle. “It will be remembered as one of our best and you were a part of that. You were grebe immunized by. I am honoured that my work is able to be part of this important campaign.”

million a year to be matched 2-to-1 by the Bill and Melinda Gates Foundation, amounting to $150 million for polio eradication annually.

Rotary has contributed more than $1.9 billion to fight the disease, including matching funds from the Gates Foundation, and countless volunteer hours since launching its polio eradication program, PolioPlus, in 1985.

In 1988, Rotary became a spearheading partner in the Global Polio Eradication Initiative with the World Health Organization, UNICEF, and the U.S. Centers for Disease Control and Prevention.

The Gates Foundation later joined. Since the initiative launched, the incidence of polio has plummeted by more than 99.9 percent, from about 350,000.

Jamaal Rolle, The Celebrity Artist is an award winning artist who is known for his life-like portraits of some of the world’s most recognized figures - from world leaders to celebrities – to everyday citizens. He is a multidisciplinary artist who works in various mediums. For more information, visit www.thecelebrityartist.com. 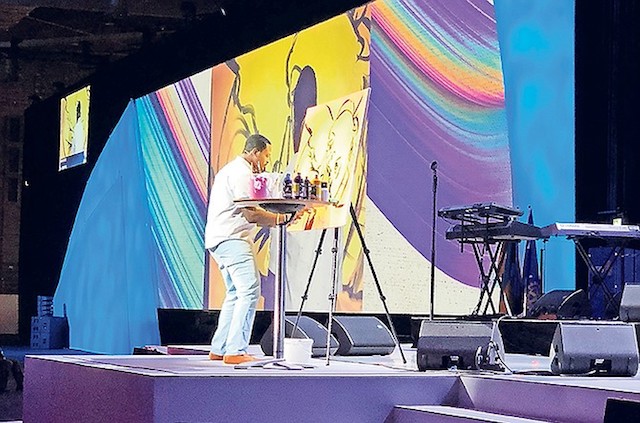 At the 2019 Rotary International Convention in Hamburg, Germany, Rotarian and award-winning artist, Jamaal Rolle, known as The Celebrity Artist, is seen on stage, speed-painting the first of two “End Polio Now” creations. He went from start to finish in around 10 minutes where for the first 5 minutes, he painted the subject upside-down. It raised €11,000 (US$12,450.00).

Rotary International President (2018-2019) Barry Rassin who hails from The Bahamas salutes Rotarian Jamaal Rolle, The Celebrity Artist for creating a painting showing a child receiving a drop of the polio vaccine for the End Polio Now message. The painting raised €8,000 (US$9,065.00) at the 2019 Rotary Convention in Hamburg, Germany that was held in early June. 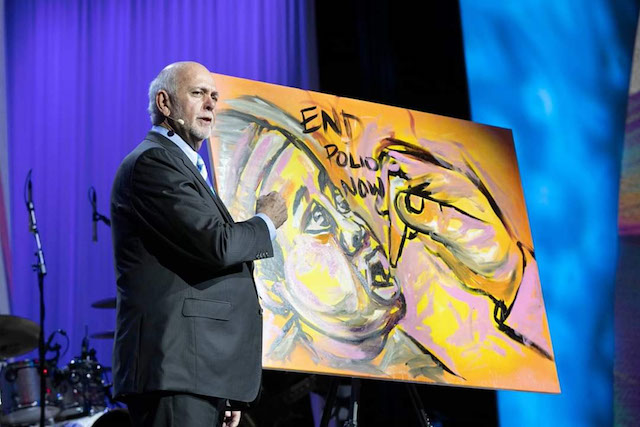 Rotary International President Barry Rassin (2018-2019) stands next to the “End Polio Now” painting. It was created as a speed painting, upside-down in 10 minutes by award winning artist and Rotarian by Jamaal Rolle was produced it on stage before an audience of 25,000 Rotarians, family and friends from around the world in Hamburg, Germany on June 2, 2019. R.I. President Barry thanked the artist: “It (the 2019 Convention) will be remembered as one of our best and you were part of that.”