Prime Minister the Most Hon. Dr. Hubert Minnis pledged his continued commitment to the needs of the poor, as he addressed the League of Haitian Pastors during their 25th International Crusade on Thursday, May 23, 2019. “Even as our economy continues to improve, we will not, I will not rest until many, many more people have jobs and other economic opportunities,” the Prime Minister told the congregation in the Joe Farrington Road auditorium.

And, he called on the League to also reach out to help those in need, as God has commanded all to do.

The Prime Minister was accompanied by the Hon. Frankie Campbell, Minister of Social Services and other government officials.

The Crusade was held under the theme taken from: Genesis 3:9 “But the Lord God called to the man, ‘Where are you?’”

According to the Prime Minister, the spiritual message of these words is very powerful. “The message is that no matter where we are in life, no matter how distant we might be from God, no matter our sins and weaknesses – God is always searching for us. God is always calling us.”

A medical doctor, the Prime Minister recalled that many years ago when he studied medicine at the University of the West Indies, he met fellow students from around the Caribbean. “We came from different countries. We had different cultural backgrounds. We had different last names and accents. But no matter our differences, we had a shared history. We had a common destiny,” he said.

The Prime Minister went on to explain that they were all inspired by the Haitian Revolution and what it meant and still means for the Caribbean and for the world. "Since that Revolution and all the struggles for majority rule and freedom throughout the West Indies, the peoples of our region have sought to build democratic countries committed to the common good. We must continue to share a commitment to democracy and to the rule of law. Democratic institutions are the wellspring of freedom and the guarantor of human rights,” he said.

Often talking about the common good, the Prime Minister explained that it is based on the dignity all have as human beings, made in the image and likeness of the God who gave life. “No matter our last name, no matter where we are born, no matter our economic circumstances, in the eyes of God we are all equal. We are all God’s children!” he said.

The Prime Minister then referenced the government’s partnership initiative in the Over-the-Hill area, which recently saw the opening of a branch of the Small Business Development Center, to help provide money and training for aspiring business people.

“Our mission, my mission – is to help others to realize their dreams and to be able to provide for their families,” he said. “I know that many people are still struggling and hurting. I want to assure you that things are getting better. This is not just talk. We are working hard every day to make sure that many more people are working. Let me also call upon the League to reach out to those in need in your communities.”

Again drawing on experience as a medical doctor, the Prime Minister said when a patient comes in crisis, deal with the immediate problem before dealing with other issues. “A man or woman who has broken bones first needs help to relieve their pain before they can receive therapy and heal themselves. I believe that the same thing is true for the Church. You have to meet people where they are at. People first need your compassion and love and mercy. Only then can they hear the Good News of salvation and redemption.

“It is by your personal example and the example of the Church that others will taste and see the goodness of the Lord,” he told the League. 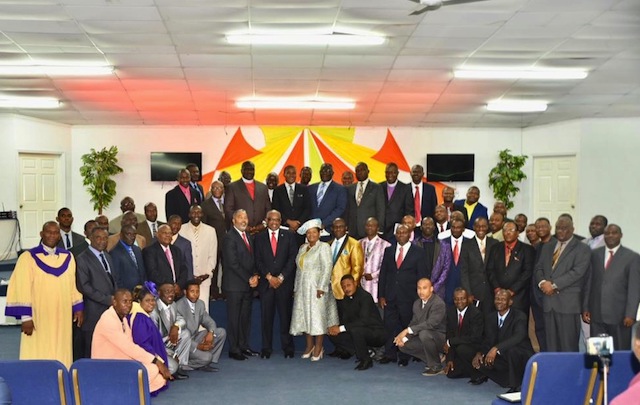