Since 1962, Lyford Cay International School (LCIS) has been known for its standard of academic excellence.

LCIS graduates go on to attend the top colleges and universities around the world, acquiring millions of dollars in academic scholarships in the process. The class of 2019 is no exception. Students set to graduate this year from LCIS gained admission to a number of prestigious tertiary institutions in North America and Europe.

All of this year’s LCIS graduates will matriculate to college or university. LCIS graduates received admission to top-tier US schools such as The Massachusetts Institute of Technology, Johns Hopkins, Stanford, Georgetown, Vanderbilt, Duke, Emory, Carnegie Mellon, Pepperdine and New York University and Ivy League stalwarts like Yale, Columbia, Cornell, Dartmouth, Princeton and the University of Pennsylvania.

The 17 students graduating this year from LCIS were accepted to 43 different universities in five different countries.

These students were also offered a cumulative total of over $4.3M in scholarships through government, university and private awards.

College Counselor Mrs Judy Reiach says, “A parent’s investment in and LCIS education is really a long-term investment in their children's university options and often gets paid back with the scholarships our students earn from the schools, government and private foundations.”

Whether studying in the US, Canada or Europe, LCIS graduates know that having an IB education from LCIS means that they are prepared for academic excellence. Limited spaces and scholarships are still available for students from 18 months to 18 years. To learn more about the school and its academic programme, go to www.lcis.bs, contact admissions@lcis.bs , or call 242-362-4774. 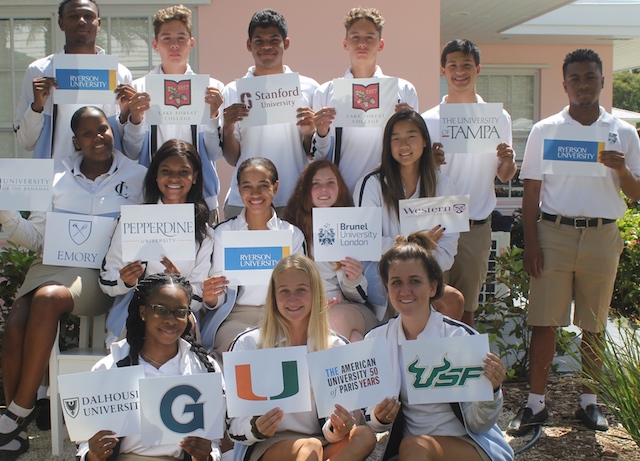 LCIS Class of 2019 Students were admitted to top colleges and universities around the world. (Students with two signs are representing their classmates who were absent).