Kidney Donor Urges Others to Save a Life 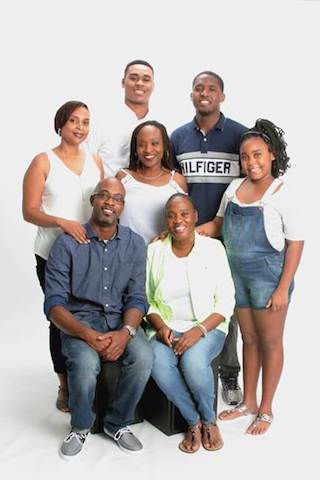 When Tamika Roberts made her way to the starting line of the Bahamas Half Marathon, her goal wasn’t to win but to raise awareness for a cause near and dear to her heart without uttering a single word – donate an organ to save a loved one’s life. She did it and she has never looked back while the brother whose life she preserved now has a lot to look forward to.

Even more powerfully, Roberts wants others to know that they do not need to depend on international donors. This type of giving can start right at home.

As The Bahamas public dialysis system is over capacity and more persons wait for a kidney transplant the living’s donor’s message of “Share a Spare,” emblazoned on her green tee-shirt said it all – humans can live with just one healthy kidney.

“Rather than placing Bahamians on an international list we need to get proactive and start our own list of persons willing to donate a kidney to save a life,” said 43-year-old Ms. Roberts who did just that for her 40-year-old brother, Antonio, back in June of this year.

“We have many individuals who are into fitness and are very much capable of donating a kidney and still live a normal, healthy life. It is unfortunate with the amount of kidney failures we have in The Bahamas there is not an active kidney foundation.”

Last month, Health Minister Duane Sands admitted that some 600 patients required renal management therapy but Princess Margaret Hospital could only accommodate a third of that number, leaving the others to be treated by private health care providers, with the government picking up the tab.

The cost to the Public Treasury was anywhere from $50,000 to $80,000 per patient per year, according to Dr. Sands. Consequently, Ms. Roberts and her brother believes there is a need to raise awareness about the benefits of kidney transplant and how this could help improve the life of some of these patients on dialysis.

In July 2017, Ms. Roberts came face to face with the cold, hard reality of renal failure when her brother, a father of two, received that very startling diagnosis.

After several mornings of waking up to bouts of nausea and vomiting, Mr. Roberts’ wife, Nickara, suggested he undergo a physical. Following lab work, the doctor contacted him with an urgent message, “You have to be admitted to hospital.” Mr. Roberts’ kidneys weren’t functioning. He was placed on dialysis.

“Previously, nothing felt really wrong. I was still very active. Aside from food leaving a bad taste in my mouth, a very gradual weight loss and the upset stomachs in the morning there were no major signs,” said Mr. Roberts. “I attributed fatigue to my job as we were in the midst of a restructuring process.”

While Mr. Roberts received his first dialysis treatment, his wife, an insurance executive, and his sister got busy making the necessary preparation to immediately obtain a second opinion in the US.

In addition to a quick-growing practice, Cleveland Clinic Florida boasts some of the world’s most renowned and most recognized physicians in transplant surgery, led by Dr. Cedric Sheffield, a physician with over 25 years of experience, having personally performed more than 1,000 transplant procedures.

Mr. Roberts’ team of doctors at the Florida hospital agreed with the local diagnosis. He began dialysis treatments at Cleveland Clinic Florida, regained strength and returned home. Being part of a family of Seventh Day Adventists, he initially turned to natural remedies upon his return and spent 11 days later that summer at Georgia’s Wildwood Lifestyle Center.

Quickly realizing a transplant was the best route, the family switched gears in September and began the requisite examinations to determine if Mr. Roberts was fit to be placed on the kidney transplant list.

Once approved, the next step was to have various family members tested to see if any were a match; two were. Surprisingly, Mr. Roberts’ wife was a potential donor. She was later ruled out.

In May 2018, sister Tamika was medically cleared to donate her kidney to her brother. Things sped up quickly then.

“Once I got the approval to be a kidney donor I wished we could do it right away. I didn’t want my brother on dialysis for another day,” said Ms. Roberts. Still, the family waited several days to attend Mr. Roberts’ daughter’s sixth grade graduation before returning to Cleveland Clinic Florida for the June 27 kidney transplant.

“Throughout the entire procedure I had an awesome coordinator, Ellen Simpson. She made me feel like a VIP from start to finish. The transplant experience was the best,” said Ms. Roberts who underwent surgery first. “I’ve been to Cleveland Clinic for other things, but Ellen had this sense of life and death, like every second counted and for us we felt it did. There was a level of comfort and support the doctors and team provided. You felt like you were in good hands. The service overall was topnotch.”

Although 10 days after her surgery Ms. Roberts was able to walk five miles, the road to recovery for her brother was not as smooth. Mr. Roberts experienced minor setbacks post operation contracting blood clots, experiencing a mild food poisoning, his post-transplant medication had to be adjusted and he underwent a biopsy.

For Mr. Roberts, those bumps in the road weren’t major. “My sprit was always upbeat. Even when I had bad dialysis days. I felt calm through the entire ordeal like everything was in God’s hands.”

Post operation, he’s urging dialysis patients to explore transplant possibilities. The Roberts’ goal is to assist in reviving the Bahamas Kidney Foundation to promote healthy living (regular exercise, drinking the required amount of water), living donors, the benefits of a kidney transplant, in addition to raising funds to help those without insurance receive medical treatment.

“The reality is people are dying and they are dying with organs that can be used. We need to look at obtaining the necessary facilities to harvest and store life-saving organs. Maybe that involves a partnership with an outside health care provider, I don’t know,” said Mr. Roberts who now has a better quality of life with his wife and two children thanks to his life-saving kidney transplant.

He’d like to see other patients with renal failure face an improved long-term outcome as well.

“Rather than placing Bahamians on an international list we need to get proactive and start our own list of living persons willing to donate a kidney to save a life. The goal is to make a difference.”