Minister of National Security, the Hon. Marvin Dames said, on December 4, 2018, that his Ministry is committed to advancing discussions on the topic of parole at a technical and national level.

“A comprehensive crime prevention strategy must include effective measures to prevent recidivism and stop the harmful cycle of release and re-arrest,” Minister Dames said, during the Opening Ceremony of the Two-Day Symposium on Exploring Community Re-Entry for Former Offenders in The Bahamas, held in the Andros Room, the Baha Mar Convention Centre. “Attention must also be paid to the social reintegration of ex-prisoners if we are to see any meaningful success in reducing our recidivism rate.”

Among those taking part in the ceremony were Acting Commissioner of the Bahamas Department of Corrections Charles Murphy; Retired Commissioner of Police Paul Farquharson; the Most Reverend Drexel Gomez; Inter-American Development Bank (IDB) Chief of Operations Michael Nelson; and a number of Government and private-sector stakeholders.

Minister Dames stated the Government of The Bahamas remains concerned about the recidivism rate in the prison system.

“It is imperative that governments and communities develop effective interventions that will help ex-offenders successfully re-enter the community and avoid further criminality,” he said. “Offenders released from prison can face a variety of challenges that may prevent them from becoming law-abiding citizens.”

Minister Dames pointed out that international studies show that most returning offenders have difficulty managing the basic elements for successful reintegration, such as finding and maintaining employment, finding a place to live and reconnecting with their families.

He added that parole was a structured and supervised transition system that provided prisoners with the necessary support to successfully re-enter the community.

“I would like to commend the work of the Bahamas Probation and Parole Committee chaired by retired Commissioner of Police Paul Farquharson,” Minister Dames said. “In 2016, the committee began the important job of charting a path to parole implementation.” Funded by the Inter-American Development Bank, Minister Dames continued, the committee was responsible for making recommendations for the establishment and operation of a parole system for The Bahamas.

“This symposium represents the first in a series of working meetings that will hopefully pick up where the committee left off, and continue the fundamental work of the implementation process,” he said. “A Conditional Release of Offenders Bill 2016 has also been drafted and will serve as a useful resource as we work to map out the parole process in The Bahamas, with valuable input from representatives of the Bahamas Probation and Parole Committee, the Bahamas Department of Corrections, the Royal Bahamas Police Force, relevant community groups, the Office of the Attorney General, members of the judiciary and the Bahamas Bar Association.”

Minister Dames noted that the overall goals of the Symposium encompassed the following: a review of the status of the Technical Cooperation Initiative between the IDB and the Bahamas Department of Corrections; the creation of a platform to discuss the Probation and Parole Committee’s Report, with feedback and accompanying recommendations for crafting the way forward, supporting a technical expert review of the Conditional Release Bill 2016; and drafting a ‘Next Steps’ in the Parole Implementation Process.

“Through this initiative and others that are underway, the Ministry of National Security is committed to creating a safer and more secure Bahamas, by successfully executing and implementing programs for the benefit of all Bahamians,” Minister Dames said.

“A fundamental action under this agenda includes the enhancement of rehabilitation services in our prison system,” he said. “It is hoped that through this symposium, we will re-energize our stakeholders and chart a clear path to full implementation of a parole system.” 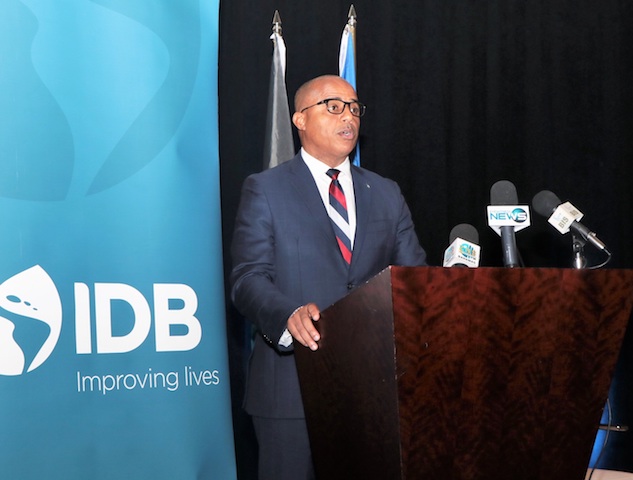