1st Bahamas Blockchain and Cryptocurrency Conference a Week Away

As the launch of the first Bahamas Blockchain and Cryptocurrency Conference is just over one week away, Minister of State for Grand Bahama in the Office of the Prime Minister, Senator the Hon. J. Kwasi Thompson, on Monday encouraged Bahamians to get registered.

The conference, scheduled to be opened by Prime Minister of The Bahamas, Dr. the Hon. Hubert A. Minnis, is being held from June 20 to 22 at the Grand Lucayan resort. The official opening will be held at 10:00 a.m.

Direct benefit with this initiative has already been seen, he said, with the opening of GIBC Digital which has already hired 25 people and is scheduled to hire 25 more.

The tech conference hosted last year started the initiative, and armed with a strategic plan as to how to successfully become a technology hub, one of the suggestions was to have a conference that focused on blockchain and cryptocurrency, which the Minister described as “one of the fastest moving industries in the technology field.”

Stating that they are pleased with the response to the conference both locally and internationally, Minister Thompson added the calibre of speakers shows the desire the country has to be a part of the industry and shows companies that Grand Bahama is open for business.

“Again, it is a marketing tool to allow the world to know that Grand Bahama is open, open for business and it is about diversifying our business here in Grand Bahama.

“Which ultimately means providing more improvements to our economy and providing more jobs for Bahamians because that really is the focus of this government.”

Omar Isaacs, an Investment Officer at Office of the Prime Minister, said the conference focuses on opportunities for venture capitalists and some of the pitch presentation companies in attendance from around the world.

“A lot of persons have really looked towards the crytocurrency portion of this, but we want to focus on the blockchain technology that allows for crytocurrency to be exchanged.”

Listing some of those who will be in attendance, he said, Michael J. Casey and Anthony Di lorio are internationally known in this field and they explain what blockchain is all about.

Describing the conference as a “hybrid” one, Mr. Isaacs added, “We will have a venture conference side of this. So during the time we have education panel discussions going on we’ll also have pitch presentations from international companies that will be set before venture capitalists coming in from Los Angeles, Houston, Texas, New York and Canada to hear these particular companies pitch their wares and see if we can strike deals right here in Grand Bahama.

“In addition to that, after they would have struck those deals, our investment officers will be right there with them to help them make that transition to bring their base of operations here to Grand Bahama.”

To register for the conference, visit www.blockchainbahamasconference.com

Registration for Bahamians is free of charge (promo code: bah2018). 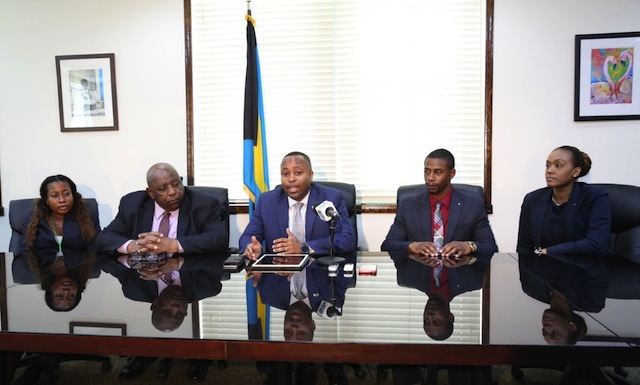