The ceremony was performed by Her Excellency Dame Marguerite Pindling, DCMG, Governor General of the Commonwealth of The Bahamas, at Government House, Mount FitzWilliam.

A graduate of the University of the West Indies (Bachelor of Laws, 1993) and the Norman Manley Law School (Certificate of Legal Education, 1995) Mr. Gaskin was admitted to the Legal Bar of the Commonwealth of The Bahamas in 1995.

The Office of an Independent Director of Public Prosecutions was established through A Bill for An Act to Amend the Constitution of The Bahamas to provide for the Establishment of the Office of the Director of Public Prosecutions and For Matters Connected Thereto (Long Title) that was tabled in the House of Assembly on Wednesday October 18, 2017. (Short Title The Bahamas Constitution (Amendment) Act, 2017.)

Article 78 A of The Bahamas’ Constitution Amendment Act, 2017, which established the Office of the Director of Public Prosecutions states in Paragraph 3 that: ''The Director of Public Prosecutions shall have power in any case in which he considers it desirable so to do, to institute and undertake criminal proceedings against any person before any court in respect of any offence against the law of The Bahamas; to take over and continue any such criminal proceedings that may have been instituted by any other person or authority; and to discontinue, at any stage before judgment is delivered, any such criminal proceedings instituted or undertaken by himself or any other person or authority."

“The Office of the DPP's mission is to serve the public by providing prompt, impartial and integrity-based prosecutorial services, built on the foundation of the values and principles enshrined in the Constitution of the Commonwealth of The Bahamas,” DPP Gaskin said. “The core functions of the Office of the DPP, includes the prosecution of those charged by the police and other investigative agencies with criminal offences while upholding, protecting and promoting human and constitutional rights.”

Specifically, those functions are: Undertaking public prosecution of cases forwarded by investigative agencies including cases taken over from private prosecutors; Representing the Crown in all criminal trials, criminal applications and appeals; Advising the police and other criminal investigative and prosecutorial agencies on the institution of criminal charges; Reviewing prosecutions to ensure that accused persons are prosecuted on the right charges before the appropriate court, and, in collaboration with the Office of the Attorney-General, effecting matters relating to international relations including extradition and Mutual Legal Assistance (MLA).

Other functions include advising Government Ministries, Departments and State Corporations on matters pertaining to the application and development of the criminal law; The formulation, review and dissemination of Prosecution Policy; Monitoring, training, and advising on the appointment and Gazettement of public prosecutors; Addressing parliamentary questions relating to the administration of prosecution services; Addressing complaints raised by members of the public, watchdog bodies/civil society and other institutions; Providing support for victims and witnesses of offences, and undertaking other administrative roles, as required, relating to the efficient and effective administration of the criminal law.

DPP Gaskin brings a wealth of experience to the new post. As Director of Public Prosecutions in the Office of the Attorney-General and Ministry of Legal Affairs, he was responsible for prosecuting all Criminal Matters in the Courts up to the Privy Council; overseeing and conducting prosecutorial matters relating to compliance (or lack thereof) with the Financial Legislation of December 2000, particularly the Proceeds of Crime Act (Money Laundering), Financial Transactions Reporting Act, Financial Intelligence Unit Act, and the Criminal Justice (International Cooperation) Act and also matters of Fraud, Dangerous Drugs and Extradition.

He also served as Representative Delegate of the Commonwealth of The Bahamas at the Caribbean Financial Action Task Force (CFATF)Plenary Meetings from 2008-2018, accompanying or representing the Attorney - General of the Commonwealth of The Bahamas at all of the said meetings as the Chief Technical Expert. Mr. Gaskin accompanied the Attorney General, at the Ministers of Justice or Attorneys General of the Americas (REMJA) Meeting, Washington, D.C. – April 2008; the United Nations Office on Drugs and Crime (UNODC) and Inter-American Committee on Terrorism of the Organization of American States (CICTE/OAS) - Ministerial Conference on International Cooperation Against Terrorism and Transnational Organized Crime, Santo Domingo, Dominican Republic- March 2007.

Mr. Gaskin has been trained in Asset Forfeiture and related Financial Investigations by the United States of America’s Department of Justice (U.S. Justice Department) at the Federal Training Centre, South Carolina; Trained in Prevention of Environmental Crimes at the Caribbean Regional Conference, Basseterre, St. Kitts & Nevis; Trained in Money Laundering, the Challenges of Cyber Crime, Terrorism and Mutual Legal Assistance at the Changing Face of International Cooperation in Criminal Matters in the 21st Century Conference, Oxford University, United Kingdom, and Trained in Capacity Building in Combating Terrorism at the Commonwealth Secretariat Training of Specialists and Trainers Programme, in Kingston, Jamaica.

“My experiences cover every aspect of the criminal law practice from the Magistrate's Court to the Privy Council,” Mr. Gaskin said. “I have prosecuted over one thousand matters, in one way or the other, and so I am not afraid of work; from the complex and/or high profile, to the simple and low profile.”

During his tenure as Director of Public Prosecutions, the Department experienced a “significant increase” in the number of guilty pleas – particularly during the period January, 2017, to April, 2018 during which time there were 110 guilty pleas. Mr. Gaskin was confirmed in the post of Director of Public Prosecutions in the Office of the Attorney General and Ministry of Legal Affairs in December 2016 after being appointed Acting DPP in 2015.

“I am particularly pleased, among other things, with the significant increase in guilty pleas. In times past, guilty pleas were few and far apart,” Mr. Gaskin continued, “from January 2017 to April 2018, we have had over 110 guilty pleas. Note that there are 52 weeks in a year, and one full trial averages about 2 weeks, versus a guilty plea, which takes less than a day. Thus, we have dealt with over 2 years worth of trials, by guilty pleas, in the aforementioned period. This results to a significant boost in the effective use of judicial time, which is precious.

“In addition, our consultative relationship with the Royal Bahamas Police Force has been greatly enhanced by a system of review, before charging, of all cases destined for the Supreme Court, by the DPP or his delegates. This leads to tighter and more cogent cases; but we acknowledge that we have more heavy lifting to do.”

DPP Gaskin said the facilitation of “specialized units” to combat new and emerging criminal trends and typologies will also be key.

“We need more human resources to increase and buttress our prosecutorial effectiveness. More bodies (suitably qualified) are required to facilitate specialized units to combat emerging criminal trends and typologies, such as trafficking in persons, cybercrime, money laundering, and the financing of terrorism, to name a few. In addition, generally more human resource are needed to effectively service the 10 courts sitting at the Supreme Court level, and the two panels sitting at the level of the Court of Appeal.

“The requirement of more resources is also tied to the fact that the Office of the DPP must establish a greater presence in the direct supervision of prosecutions in the Magistrate's Courts. This is particularly critical, as the majority of cases tried in the criminal justice system of The Commonwealth of The Bahamas, are proceeded with in the Magistrate's Court.

“We are grateful to the Government for its formal commitment to appropriately resourcing the Office of the DPP; to ensure that the Country's law firm, on the criminal side of the administration of justice, stands pre-eminent,” DPP Gaskins added. 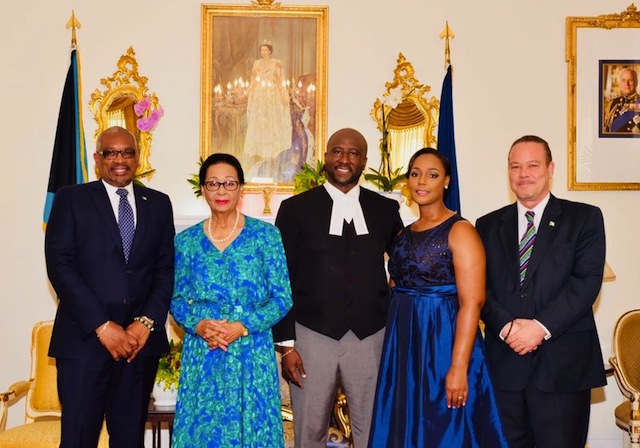