The next time you board a Bahamasair international flight you might be in for a thirst-quenching surprise. The airline is partnering with CBL during the month of June to bring a little something extra to flight time  service of complimentary non-alcoholic Kalik Radler 0.0%...

The crowds in attendance at the recent Taste of The Islands Experience, downtown Ft. Lauderdale, Florida, were wowed and just could not get enough of the drink prepared for tasting by Bahamian mixologist, Marv Cunningham...

700 Wines and Spirits Turns One

The Bahamas largest and oldest wines and spirits distributor, Commonwealth Brewery Limited, announced one year ago a total revision of its retail brand, unveiling the new identity and name 700 Wines & Spirits.

The launch of popular alcoholic beverages, such as Kalik Radler Cranberry and Pina Colada, contributed to a boost in revenue for Commonwealth Brewery Ltd. (CBL) in the first quarter of this year.
In its first quarter unaudited financials released yesterday, revenue increased by nine percent when compared to the same period last year.
The rise in revenue was impacted by new streams of revenue added...

Commonwealth Brewery Limited (CBL), a company whose beer, wine and spirits products are connected to good times and light-hearted moments, served up serious news and optimism for shareholders at the companys annual general meeting (AGM) June 8, reporting $123.5 million in revenue and $68 million in total assets while remaining debt-free.

A sophisticated taste of grapefruit in a unique and subtle drinking sensation that is soft, refined, refreshing and elegant has joined the citrus craze that has taken hold of the market in Schweppes Grapefruit.

Commonwealth Brewery recently celebrated a campaign that it considers as important as anything it has ever done  promoting safe living by rewarding drivers with non-alcoholic beverages, passing out bumper stickers, educational material and marketing the message about the importance of moderation.

With the number of traffic fatalities hitting 38 so far for the year, the Ministry of Transport & Aviation is taking steps to promote road safety. To this end, the Ministry is participating in a promotion in collaboration with Commonwealth Brewery. The event is the company's 'Enjoy Responsibly Day' sponsored by Heineken, one of the organization's top-selling brands... 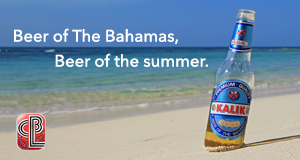