The Salvation Army- Erin Gilmour School for the Blind

The story of The Salvation Army is a story of people helping people. The services provided by the Army in The Bahamas touch up to 40,000 lives every year. Since its establishment in 1931, The Army has worked tirelessly to help those who need a helping hand , a hot meal , a shelter from abuse, a way to earn a living with dignity if not with sight, a respite from the world that has shunned or hurt them. Through its spiritual ministries as well as its feeding, education, temporary residence and welfare programs, The Army has been on the frontlines of war against desperation and hopelessness, striving to win the battle for human triumph with God's help. 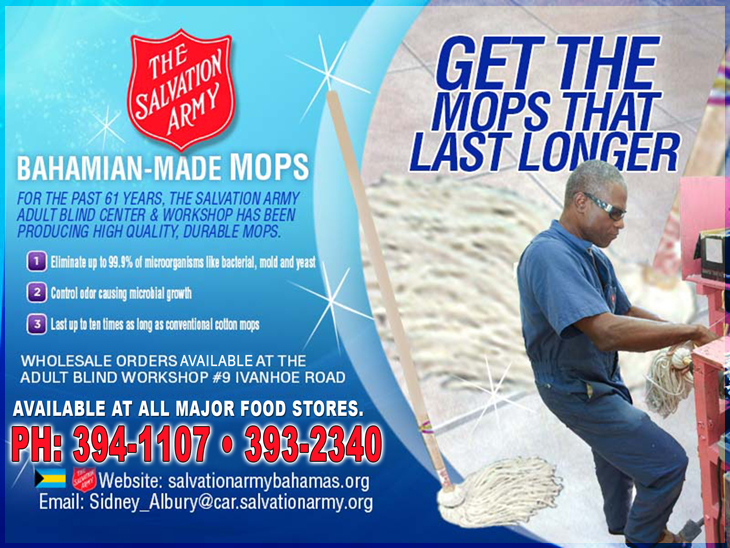 Salvation Army's Mop Workshop For the Blind
Since 1945 the Salvation Army's Mop Workshop has produced the finest mops for the local Bahamian Market. The mops are made by blind and visually impaired adults providing an opportunity for them to work with dignity and pride. The employees receive full and equitable pay for their work, while gaining a sense of self-reliance and independence. All of the workshop net profits go back into the community through the Salvation Army's social service programs. Through gifted hands we are breaking the barriers of disability in an amazing way. The Salvation Army's Mop Workshop works with the highest quality of antimicrobial yarns. The antibacterial wet mop will eliminate up to 99.9% bacterial, yeast and other microorganisms. The technology reduces the level of microorganisms on surface and protects against the negative effects of mold and mildew. The use of the mop controls odor causing microbial growth which is perfect for restaurants, hospitals, convenience stores, hotels, fast food outlets, schools etcetera where cross contamination is possible and/or cleaning of public areas.

The mops made by the workshop lasts up to ten times longer than conventional cotton mops because of the anti-microbial protection stopping the growth of microorganisms that can rot and shorten the life of other mops. The Salvation Army Mop Workshop has a track record in manufacturing a quality product.

In 1931 Colonel Mary Booth, then territorial commander for The Salvation Army in the Caribbean, was on her way to Bermuda from the territorial headquarters in Jamaica when the ship she was sailing in made a brief stop at the port in Nassau. Colonel Booth disembarked the vessel, and a quick tour of parts of Nassau coupled with passionate pleas from several of the local residents were all it took for her to be convinced that the work of The Salvation Army was needed in The Bahamas. On her return to headquarters in Jamaica, she quickly sent two Salvation Army officers to begin the work, which officially commenced in Nassau in May 1931. The Salvation Army began its religious work and social service programs in Governors Harbour, Eleuthera, in 1932, and in Freeport, Grand Bahama, in 1985.

The Salvation Army in The Bahamas is widely known for its work with the blind and visually impaired. The School for the Blind has its beginnings in Grants Town in 1948 and the Workshop for blind adults began a year later. Both the school and workshop have had several locations over the years before settling at their current locations on Mackey Street and Ivanhoe Road, respectively.

Our Mission
The Salvation Army, an international movement, is an evangelical part of the universal Christian Church. Its message is based on the Bible. Its ministry is motivated by the love of God. Its mission is to preach the gospel of Jesus Christ and to meet human needs in His name without discrimination.

"DOING THE MOST GOOD"
"Service is our watchword, and there is no reward equal to that of doing the most good to the most people in the most need."
Evangeline Booth,
daughter of The Army's founder, William Booth.