Search results for : party on bahamas

Cash Prizes for the Scariest, Most Original and Sexiest costumes!

You are cordially invited to the Miss Bahamas Organization's Miss Bahamas Wardrobe Unveiling and Sendoff Party on Saturday, August 20th, 2011 at the Beach Club Cafe.

Come cheer on our queen, Anastagia Pierre as she goes for the Miss Universe crown!

The event starts at 4pm. Beach Club Cafe is located in Sandyport on West Bay Street.

1st ever, Facebook Poolside Party. This exclusive party is the VIP event that you won't want to miss out on and its by invitation only. Relax poolside or take a dip in the infinity swim-up pool bar . Try their signature happy frozen drinks while enjoying the vibrant sounds of DJ Bling...

Nassau, Bahamas - Enclosed is a Press Statement by The Progressive Liberal Party.

On Monday of this week, the Tribune announced that its
former columnist, John Marquis was set to return and that his first column
would appear in that newspaper today.

Immediately, large number of persons began sharing the view
that the return of Mr. Marquis was likely to be a part of the strategy of the
FNM, the P...

Six new 'agents of change' are unveiled by the DNA

The slate of professional men and women from various sectors were announced at the party's Grand Bahama launch on Saturday.

DNA Leader Branville McCartney said: "Neither [FNM or PLP] has yet to put in place any broad-based programmes to grow our economy; nor have t...

Nassau, Bahamas - Enclosed is a Press Statement by The National Development Party on the 2011/2012 Budget Communication.

The 2011/2012 budget was contrived by people who love political power more than they love their country. The budget lacks coherence, consistency and credibility. It offers the most cogent argument for why The Bahamas needs a change in government.

Nassau, Bahamas - Enclosed is a

statement made by the

Today The Bahamas has lost another devoted, committed and
loyal jewel whose service helped to give rise to a nation.

Dr. Keva Bethel's selfless dedication to education came at a
watershed period in the growth of our country when those grea...

Minister of Labour
and Social Development Dion Foulkes announced today that a tentative
agreement has been reached in the contractual negotiations between the
Commonwealth Electrical Workers Union (C.E.W.U.) and the Grand

Minister
Foulkes met with both parties on 12 and 13 January, 2011 in Freeport,
Grand Bahama. Following the meetings the Minister noted: "Both ... 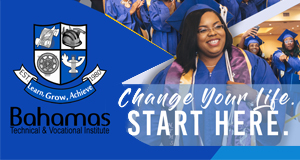