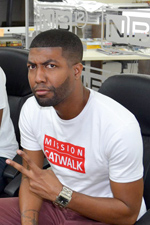 Nassau, The Bahamas - Mission Catwalk, a Caribbean based fashion reality television series is in search of burgeoning fashion talents in the region; and the hit series which recently ranked as the number one television show in Jamaica, is about to get a Bahamian invasion. When Mission Catwalk Season 3 premieres on April 13th, The Bahamas will be represented in the blossoming show as witty and incomparable local fashion designer Theodore Elyett puts his needle and thread in the race.

Mission Catwalk is filmed in Kingston, Jamaica - the country which also delivered the show's past two winners.But this year, Elyett is seeking to give the contestants from Jamaica and the seven other Caribbean countries represented a run for their money...