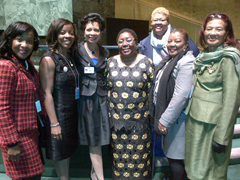 The officers and
executive members of the New Providence Women's Branch of the Progressive
Liberal Party joined the Bahamian delegation led by Minister of Social Services
and Community Development, Mrs. Melanie S. Griffin at the first week of the 57th
Session on the Commission on the Status of Women (the "Session") currently
being held at the United Nations in New York City. The representatives of the
Branch that formed a part of the Bahamian delegation was led by Chairperson -
Mrs. Arinthia S. Komolafe and included Mrs. Ann Marie Davis, wife of the Deputy
Prime Minister, Mrs. Jenniffer Braynen and Ms. Beverley LaRoda...