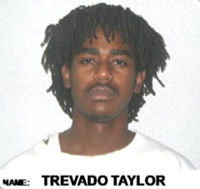 Taylor is described as having medium brown complexion, medium build and stands at 5'7" tall.