Bahamas Gets US WTO Accession Support 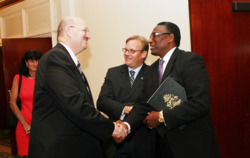 "This nation has made considerable progress since it began laying the ground work for WTO accession more than 10 years ago," said Embassy Charge d'Affaires, John Dinkelman. At the second meeting of the Working Party on the Accession of The Bahamas, in Geneva in June, The Bahamas' trade regime and trade-related reforms ...