The Legacy of Leadership Education in The Bahamas

“To listen, speak and think is what Toastmasters teaches.” With these words, Prime Minister Rt. Hon. Philip E. Davis addressed the audience of Past Presidents Night at the First Bahamas Branch of Toastmasters Club 1600. . Celebrating a 58th consecutive year of existence, under the patronage of current president TM Devaughn Taylor, members and guests gathered at SuperClubs Breezes to celebrate the organization under the theme “Building Legacy.”

The organization has birthed and been administered by numerous notable national figures of various professional fields for that duration, and culminating the night with a special address was Prime Minister and Past President Rt. Hon. Philip E. Davis.

As the twelfth (12th) President of the organization and Distinguished Toastmaster, the Prime Minister reflected upon how the program was pivotal to his education development and subsequent achievements in his personal and professional life. The Prime Minister continued, “The program embodies learning by doing, and fun inspired learning.”

Other Past Presidents include Edward J. Carey, DTM, L. Edgar Moxey, DTM, Keith Major, DTM, Lester Gibson, DTM, Anthony Longley, DTM, Carlos Palacious, DTM, Roderick Colebrook, DTM, and many other national titans were all present for the event with a sizeable audience. President TM Devaughn Taylor presented the Prime Minister with a commemorative plaque and a copy of “Echoes of History,” a documentary of the club completed by 56th President Shacoy Mullings, DTM. The organization was chartered on January 1, 1969 under the country’s first Prime Minister Rt. Hon. Sir. Lynden Oscar Pindling. It is the original education program of communication and leadership training in The Bahamas. Continuing its building of leadership and communication, the event symbolized the firmly established legacy of the Club. Similarly, it displayed the perpetuation of the club’s legacy into the future through the organization’s current leaders and those to come. Club 1600 has made its mark and is poised to continuing building its members which in turn contributes to the growth and development of The Bahamas. 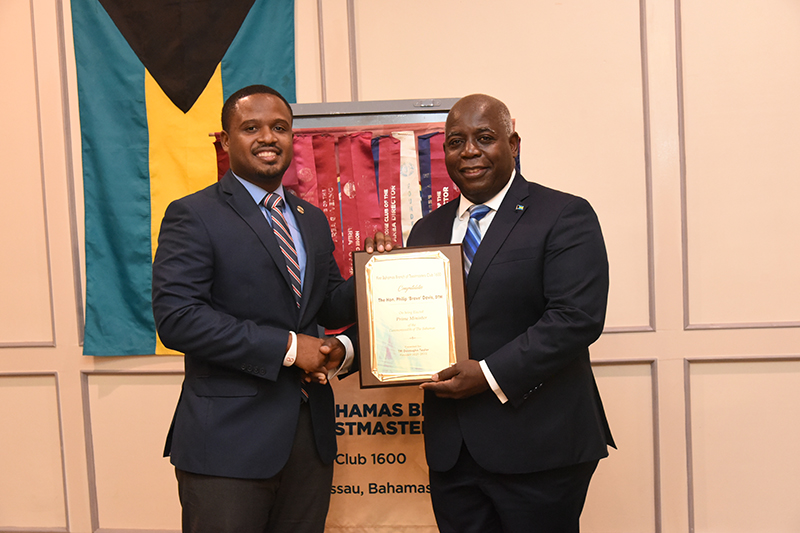