Officials from the Rhode Island National Guard (R.I.N.G.) paid a Courtesy Call on Minister of State in the Office of the Prime Minister with responsibility for Disaster Preparedness and Emergency Response, the Hon. Myles K. LaRoda, Tuesday (May 10), in continuation of the partnership between R.I.N.G. and The Bahamas.

The Rhode Island/Bahamas State Partnership was established in 2005 through the United States’ Department of Defence’s State Partnership Programme (SPP), linking the R.I.N.G. with the Royal Bahamas Defence Force and the National Emergency Management Agency (NEMA) in a cooperative, mutually beneficial relationship to enhance, influence and promote access in the region.

Over the years, the R.I.N.G./RBDF/NEMA partnership has resulted in numerous collaborations and exchanges in terms of training, information exchange and simulation exercises. The Partnership has also been expanded to include collaborations with the Royal Bahamas Police Force, the Bahamas Department of Corrections, The Bahamas’ Ministry of Tourism, the University of The Bahamas, and more recently, the Ministry of Health during the COVID-19 Pandemic.

State-Minister LaRoda, in welcoming R.I.N.G. to the Office of the Prime Minister’s Disaster Management Unit, applauded the National Guard and the State of Rhode Island, U.S.A., for their role in the State Partnership Programme with The Bahamas. Mr. LaRoda said the Partnership between R.I.N.G. and The Bahamas is indicative of the “great relationship” The Bahamas continues to share with the United States of America.

State-Minister LaRoda told his guests that the relationship between the United States of America and The Bahamas dates back hundreds of years.

“As a matter of fact, while the Americans were fighting World War I and II, there was a shortage of male labour in the U.S. and so the Caribbean and the U.S. Government had what was considered the Contract in which Bahamian males worked the farms from Florida all the way up to Minnesota. The original Howard University was built out of wood from The Bahamas as a gift and so there is a history between our two countries. That is the type of relationship we see with our partnership with the United States, not only as our Big Brothers or defenders of democracy but who have always come to our aid in terms of need. Thank you for your cooperation and your partnership over the years,” State-Minister LaRoda added.

Permanent Secretary in the Office of the Prime Minister’s Disaster Management Unit, Mr. Carl F. Smith, was at the helm of the National Emergency management Agency when the State Partnership was formed, visiting Rhode Island in the initial stages of the Partnership. Mr. Smith labelled the Courtesy Call and subsequent discussions as “timely.”

“We cherish the relationship we have. It has been a strong, long relationship in terms of training, information exchange and simulation exercises. It started with the Royal Bahamas Defence Force and NEMA and has now grown to include the Royal Bahamas Police Force and the Bahamas Department of Corrections and also included collaborations with the Ministry of Tourism and the University of The Bahamas (the College of The Bahamas that time),” Mr. Smith said.

“You are visiting when we are commemorating Disaster Preparedness Month. The Hurricane Season is right around the corner and so it is a timely visit for us as we sharpen our preparedness. I hope that we do not have to call on you, but I know that if we do, you are always willing to support us.”

Major-General Christopher P. Callahan serves as the Commanding General of the Rhode Island National Guard. He said the 17-year State Partnership between R.I.N.G. and The Bahamas, has been “fruitful and (one) we are looking forward to continuing to facilitate.”

“Our partnership with The Bahamas is just under one of just under 80 that the State Department has throughout the world  with a National Guard from a State in the United States with another country, but I consider ours one of the most unique, because we are literally the most geographically-matched State Partners in the entire United States portfolio. The mutual importance of our relationship, relative to whether it is security, the economy, just the flow of world events, is very integral to the fact that we are literally neighbours and essentially family when it comes to how the islands match up,” Major-General Callahan said.

“We think it special. We know that we have been treated very special, especially from the Royal Bahamas Defence Force and we are certainly glad to continue to participate and get back into what I would consider a greater flow of the merging of strategic and tactical challenges to kind of move us ahead here. We are really happy with the role that we have been able to play in our partnership.”

Major-General Callahan applauded The Bahamas for its observance of Disaster Preparedness Month.

“This idea of a disaster preparedness month, the pre-work that is done, is really very critical so we certainly applaud you for that and want to continue to participate,”

Director of the National Emergency Management Agency (NEM), Captain Russell, said the collaboration has allowed the Agency to continue to build capacity in critical areas, while strengthening the Agency’s response capability.

“My team from NEMA went on several missions and we saw your teams in action and were able to glean certain concepts that we could bring back to Nassau to help us set up our operations (and) so what you see at NEMA is what we saw in some spots in your Operations Centre when we attended exercises,” Captain Russell said. “The whole idea when we go on these missions is to see what we can get for capacity-building and knowledge exchange just to help us strengthen our response capability here in The Bahamas.

“We truly appreciate what was done in the past…. Since the State Partnership Programme, we have really benefitted tremendously over the years from being involved with your team and by extension, USNORTHCOM, so we truly appreciate it.” 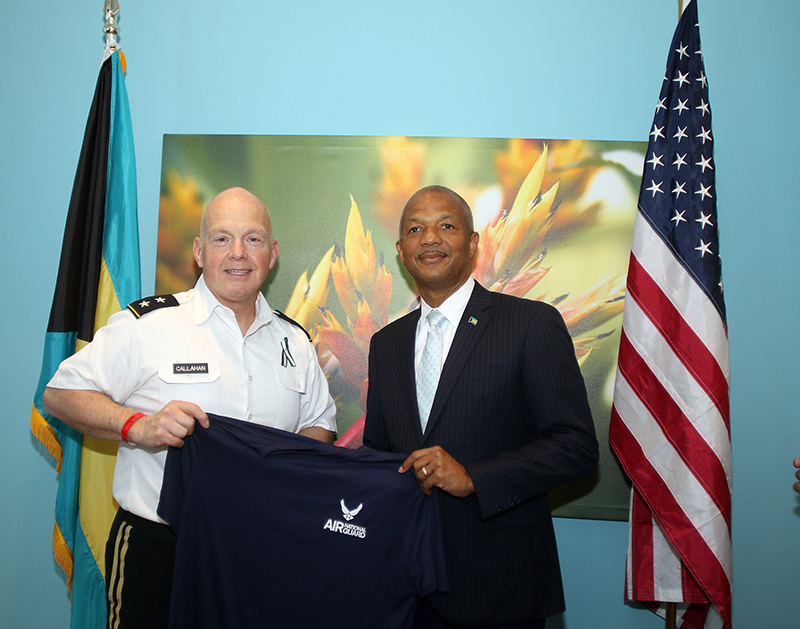