This holiday season, when Bahamians buy buckets of chicken from KFC, they will be sure to notice something different.

KFC Nassau has become the first major international brand to honor a legendary Bahamian artist on its seasonal packaging with KFC buckets decorated with the artwork of the late Jackson Burnside III.

The first bucket was presented to Burnside’s widow Pamela Burnside, who partnered with KFC Nassau as a way to celebrate her husband on the 10th anniversary of his passing, and to celebrate Junkanoo, something that was dear to his heart.

“What a fitting tribute to end the year with something so very important and during this time of celebration not only of Christmas, but also of Junkanoo and of Jackson. It’s so Bahamian. It is a natural fit. Jackson would be very pleased,” said Mrs Burnside.

KFC Nassau presented Mrs Burnside with one of the commemorative buckets inside a specially designed display case and it will remain on display at the Doongalik Art Gallery on Village Road where much of Burnside’s art is showcased.

When KFC Nassau came up with the idea to honor Bahamian art in such a unique, but fitting way, Mario Cash, General Manager of Restaurants Bahamas Limited said they knew immediately that they wanted to start with one of Jackson Burnside’s works of art.

“He was the first one to come to mind because he’s a legend not only in the art world, but in the world of Junkanoo as well. We are so grateful to Pamela and his family for embracing our vision and working with us to create such a fitting tribute to Jackson Burnside,” he said.

Besides being thrilled to see her husband’s artwork on display in such a quintessentially Bahamian way, Mrs Burnside is excited about the message this partnership sends to other artists.

“With the creation of these buckets, we are able to get Jackson’s art into the hands of so many Bahamians who may otherwise never have seen and appreciated his creative work,” she said, “it’s also exciting for me to hope that other artists and the wider public can now understand the orange economy and the connection between a piece of art going beyond something that just hangs on a wall. It’s very important for people to see that your culture can take you further.”

Mrs Burnside has been busy putting the finishing touches on the new Jackson Logan Burnside III Design Library and Research Centre which will house thousands of Burnside’s art, design, Junkanoo, business and architecture books. The library will be open to the public to go in and use the books for research, and has been catalogued by librarian Penelope Nottage.

KFC Nassau made a $5,000 donation to the library as a way of thanking the Burnside family for entrusting Jackson’s art to the brand. 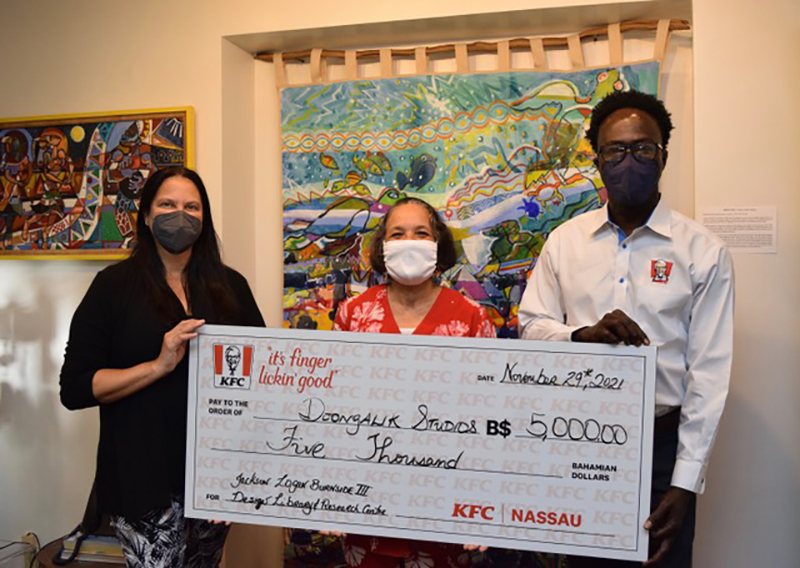