Last month political novices shared a stage and debated issues that elevated the youth voice. Last week, what many saw as senior contenders were in the spotlight debating two of the most extraordinary threats of our time – COVID-19 and climate change. Though relatively new in this Bahamian context, political debates are necessary to a maturing democracy and political culture, according to a senior academic and historian.

Associate Professor of History at University of The Bahamas Dr. Christopher Curry, co-chair of the debate series planning committee, says these debates are pivotal to the future political culture of The Bahamas.

“The function of a debate is really important to the advancement of democracy in our country because it allows the public and the people who watch the debate to see how well you handle real, policy based questions,” he notes. “Then your answers now must be driven by empirical data and factual information. You can’t get away with hearsay and erroneous statements that might be said in another political space, like at a rally, so really what we are seeing is the enhancing and deepening of democracy.”

According to Dr. Curry, differences in political ideologies and policy positions are emerging in a way that is not clouded by what has been the traditional political campaign platform.

“You are able to differentiate parties and their particular views on national issues and that is one of the things that a debate can do that a rally can’t. At a rally in our traditional culture you generally have loud music, adult beverages and what amounts to emotive preaching. At a debate, we are asking and challenging our debaters to bring a more rigorous and definitive response to questions and to discuss policy and ideas related to the platform that their party may have formed,” he says.

His sentiments echo those of the Organization for Responsible Governance which recently asserted that debates are a fundamental component of participatory governance and are a crucial step toward a modern and transparent democracy.

Having endured seismic shifts brought on by the twin crises of COVID-19 and climate change, the Bahamian electorate expects decisive and comprehensive action to tackle the most daunting challenges of our time. Participating in the second in a series of national debates on June 1st, representatives of six political parties seeking to contest the next general elections proffered their views on how these matters ought to be tackled to make the country, its systems and its people more resilient.

While members of the public who commented on social media appreciated the opportunity to scrutinize and learn more about different political agendas, many expressed disappointments in what they perceived as the debaters’ lack of preparedness. In particular, they lamented those who read responses from prepared texts and whose responses failed to answer specific questions.

Dr. Curry revealed that amendments will to help enhance the quality of the two remaining debates and to discourage extensive reading by debaters.

“We are going to tweak a couple of things. The reading from scripts we are going to try to discourage likely by reducing the number of scripted questions that we have or entrenching in the rules more stringent regulations as it relates to what you can actually say from a piece of paper,” he notes.

University of The Bahamas (UB) and Verizon Media Group (VMG) hosted the COVID-19 and Climate Change debate at UB’s Performing Arts Centre at the Oakes Field Campus. The debate – which was televised and live streamed – was also the first of three thematic debates.

In response to questions – some provided in advance and other asked spontaneously via a focus group in Grand Bahama – debaters shared their respective party’s policies and initiatives to create new opportunities in the green economy, whether they supported the establishment of an oil industry in The Bahamas, how they would address the unique challenges that the poor and vulnerable face in accessing health services, and how they would reduce the cost of healthy food items. During rebuttals, the accountability record of successive administrations, budgetary scrutiny, and governments handling of the controversial Oban project in Grand Bahama and the Bahamas Petroleum Company’s oil drilling were scrutinized.

Debate organizers have been deliberate about inviting a broad cross section of the community to actively participate. The first debate in the series included a focus group of students from UB. The second featured another focus group of Bahamian professionals based in Grand Bahama. Additionally, several polls are underway to gather data from the public on key, national issues.

Amendments are being made as the debate series progresses in order to enhance its value for the Bahamian public, Dr. Curry says. “We are, generally, happy with what we have so far and we see this as absolutely pivotal to the future of our political culture in The Bahamas.” 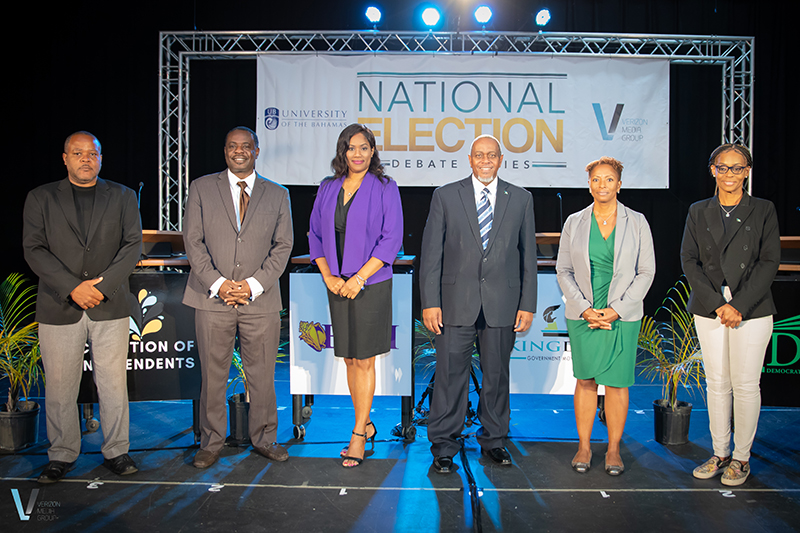