Phylicia Duncombe has tried a lot of ways to end the harassment she's been dealing with since 2019 but none of it has stopped him from sending message after message, insisting that they are meant to be together.

She blocked him and he used alternate accounts, sometimes creating a new one every week. He contacted friends he found on her contacts list, asking for advice because she had, "a lot of qualities I would normally look for and more". He messaged her mother to plead his case and showed up at her mother's business, unannounced and without identifying himself.

Phylicia had known him in high school, they had friends in common. So when he first reached out it wasn't surprising. But when he said he wanted more than friendship, she made it clear she wasn't interested. Soon she was getting paragraphs of text every other day. So she blocked him.

Not long after that, she got this message from another account: 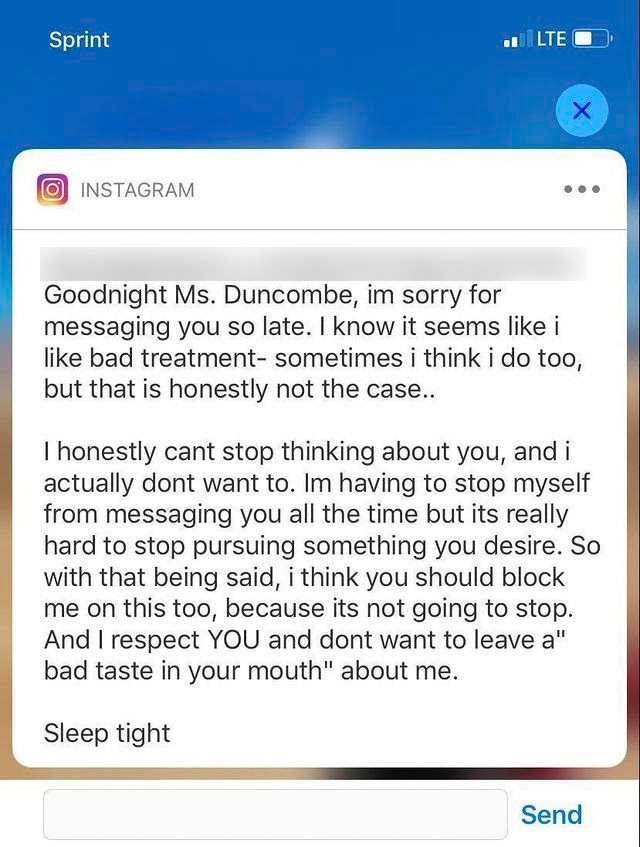 Phylicia took him at his word and blocked him there and anywhere else he showed up. She doesn't remember exactly when she stopped responding to his messages but it was back in 2019. The messages kept coming anyway.

When Phylicia started saving screenshots, it wasn't for evidence, she thought they were strange and shared them with her friends. Eventually, though, she was concerned enough to do some research online and one piece of advice showed up again and again—document everything.

She still didn't think he was a stalker and didn't want to believe she was dealing with someone dangerous but she kept records anyway. Interactions, dates, places, in the end she ended up sorting them by year. The messages kept on coming and not just to her. 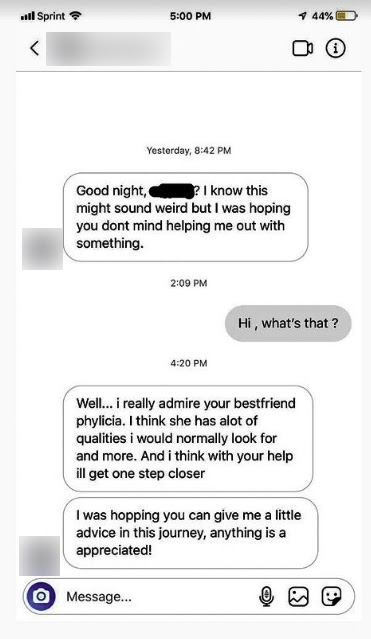 "Every other week I would receive a message from one of his new accounts. This happened so often that at a point in 2020 I had stopped checking my message requests on this account altogether.

"He would operate in seasons. It would be one month here, one month there. Sometimes he would be super aggressive and I'd get a message every other day. A lot of the messages were very late at night. There are so many screenshots I didn't include; fake accounts, comments under my business page, my YouTube channel." He'd keep up the pace for a month, maybe six weeks and then the messages would die down for a month.

After the facebook message she decided to contact his family. She told them what happened and sent them screenshots of some of his many messages. They were shocked by the behaviour of the man they thought they knew. Phylicia said she’s not sure they would have believed her at all if she didn't have so much evidence. He’s very different in person than he is when he’s sending her messages. But she did and they did believe her. They told Phylicia that he'd been through a lot but assured her that they thought his actions were unacceptable and that they'd talk to him. Then the messages stopped. That was near the end of 2019.

A New Client
Phylicia is a photographer and often books photo sessions with customers through a form on her website before meeting them on location. As a Bahamian living in Florida, one of the perks of being there was that she didn't worry about him the way she did in Grand Bahama.

It was a typical day in January of 2020 and Phylicia was going through her emails when she noticed one of her new customers had emailed a follow-up question about paying for his session. Unlike the form on her site, this email came directly from their email account and it showed their full name. It was him. It was the first time she was afraid.

"That's when I thought, 'Oh. He's really going to extreme means and measures'." That's when she decided to get help.

The Authorities
The police officers listened to her story but told her so far he hadn't committed a crime. They advised her to file a Binding Over Order which would require him to keep the peace for a set period of time. It's a civil matter - between two citizens - and doesn't include criminal charges or police involvement.

If he did break the law while under the Binding Over order he might face stiffer consequences but Phylicia worried that the law he broke could include hurting her or someone she cared about. Still, in March of 2020, she started the process and got a court date for April. Then on March 15th the Prime Minister announced the first lockdown and all but the most serious matters were set aside.

The entire process was complicated, demoralizing and ineffective. To even get the order she'd have to appear in court with him. "I didn't want to see him at all. I just did not want to see him, period." And when she did finally get a court date he didn't show.

When the harassment continued and her court date continually postponed, officers at the station she was talking to told her to write a letter to the Deputy Magistrate, asking for urgency. She never got a reply.

When she called the station in April they told her it had been too long and she’d have to start the whole process again. And when she went back to the station, they told her there were no more forms available and she'd have to come back.

Later she found out that there was a way he could have been arrested but that was a year after starting the process. No one made her concerns a priority or clearly explained her options during her many visits and pleas for something that might actually help.

Just about the only thing going to the authorities had done was waste a lot of her time and inform her stalker that she was planning to take him to court. She hoped that at least that might stop the messages. Instead they got worse. 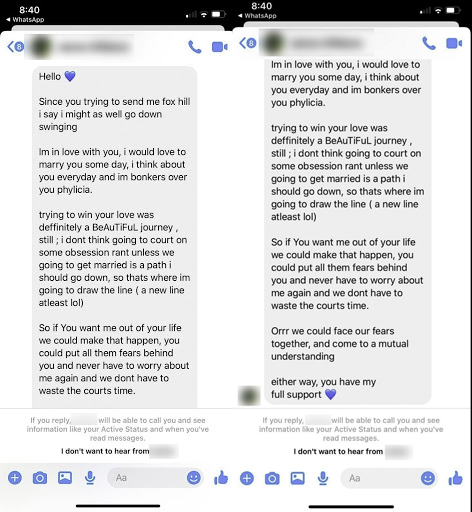 "The most aggressive behaviour came after he got served."

2021
On Valentine's day he sent flowers to her mother's business, a salon. It wasn't the only time he tried to get to her through her Mom, he had messaged her before. 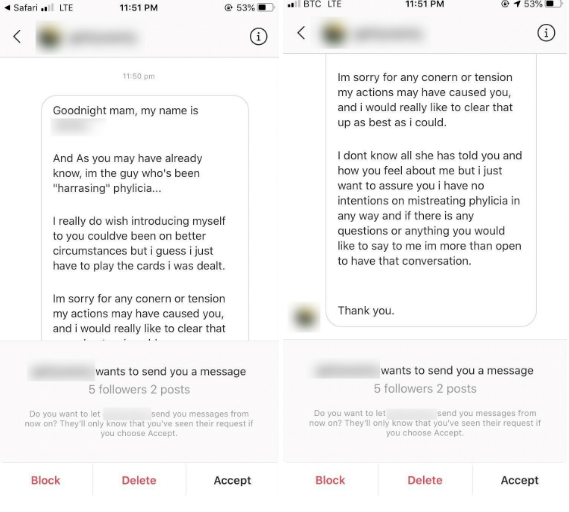 On her birthday, he went into her mother's business himself, asking for a pedicure. She didn't realise who it was but "felt that there was something off" about him.' It wasn't long before she asked for his name and realised who he was. It was unsettling. She asked him to leave but he wanted to talk, to try to convince her. He left when she was insistent.

Public
Soon after the salon visit Phylicia got this: 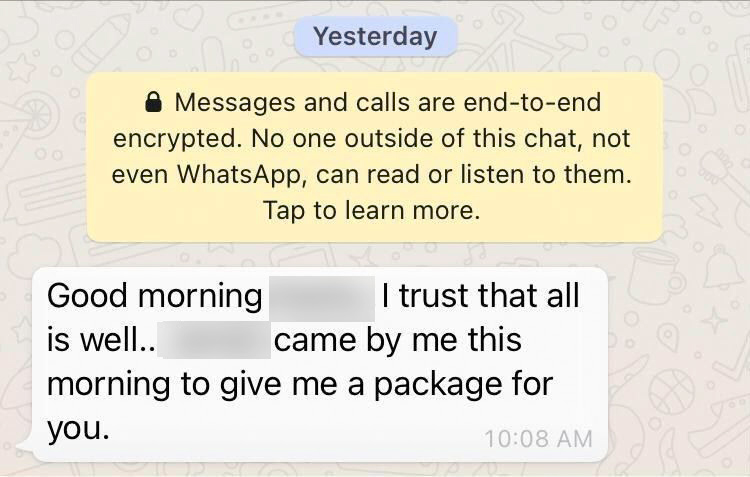 Phylicia had considered going public before but she hated the idea of humiliating someone. After the incident at her mother's place and the lack of support from the authorities she was out of options. And the idea that keeping quiet might lead to him harassing other women was weighing on her mind. "He has a demeanor that makes it hard to believe he was doing this. I wanted to bring about awareness for my safety, for the safety of other women and so other people can see how I did it."

When she decided to post the screenshots and share her story, Phylicia was careful not to insult him as a person. She wanted to publicly address his actions, not hurt him. "I wanted to handle the situation the same way that I would want someone to handle my father or uncle or brother—at the end of the day I know he has loved ones too. At the same time I believe in you being corrected for your horrible actions.”

When she shared the story on her Instagram account her post was screenshots of his messages with a few comments for context, most of which we’ve featured here. It was something she thought about for a long time.

Response
Since sharing her story, Phylicia said she has not gotten a single negative response. And she got a lot of offers for support and help. Many women and one man have since shared their own stories of harassment. Some of the help came from lawyers and people working in the justice system. She even found a police officer to serve legal papers but her stalker has managed to evade him for a month so far. On the day she shared her story he posted this: 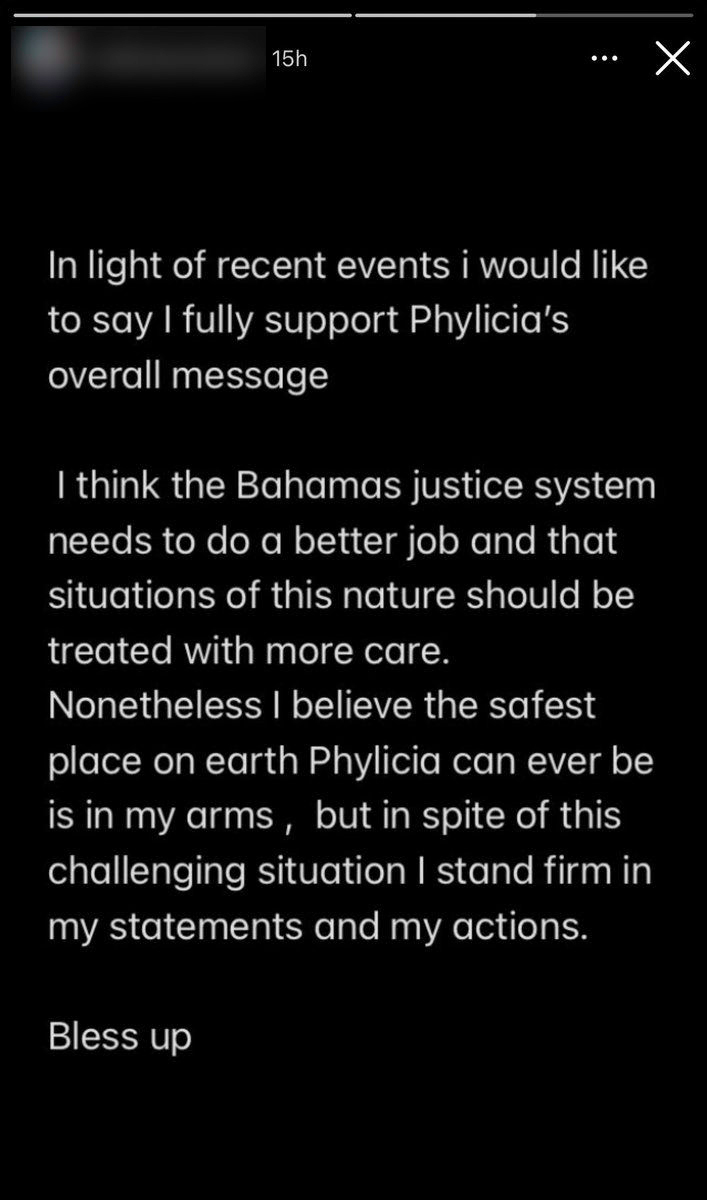 But he hasn't messaged her since. In the end, going public has helped more than anything else—"I think it did way more than that bound over order could have done". While it's been a great relief to finally make progress and stop the harassment, Phylicia is left wondering why it was so hard to get help.

Moving on Although the messages have stopped, they’ve stopped before. Phylicia can’t know which pages he’s watching or when she might get another message or who else he might be messaging. He still hasn’t faced any legal consequences.

As a traveling photographer, announcing where she'd be was a part of connecting with clients, a way to build excitement. It's something she quietly stopped doing, worried that he, or maybe someone like him, would take advantage of her accessibility.

It meant fewer bookings and took away one of her favorite parts of her work. Plus she didn't want to tell people why she had pulled back.

“Frustration is a total understatement. For one, I feel absolutely no form of protection from the justice system of The Bahamas.

"I am way more cautious of my surroundings, very cautious of what I share publicly. I don't share locations while I'm still there."

So much of the process puts a burden on the person being harassed on top of the stress of the harassment itself. Without reliable tools to defend against these kinds of attacks, victims are left to turn to the internet for advice and to police their own actions when they can't get the police to affect the actions of others.

What someone in her position should do is hard to answer. Hiring a lawyer is probably the best way to get a legal result but that's expensive and not a solution for everyone or even most people. Not everyone can go public either. Keeping records certainly helped in this case.

"I was never passive, I don't want people to be passive. I really wanted to let women know that from the moment you sense something is off, you act."

Phylicia said women need more backing, more trust, "it shouldn't take us coming over and over and over. There has to be an increased level of seriousness. From the minute we describe what's happening it should be clear that something bad is happening."