Rare real estate listing â like a secret island with a narrow road to civilization, Bahamas property one of a kind

With one single residential lot in a gated community in The Bahamas selling this week for a whopping $9 million and estates on the market with $30 million price tags hardly raising an eyebrow, you’d have to wonder what it takes to create a listing so extraordinary even a market accustomed to the extreme sits up and takes notice.

How about a private peninsula that’s like an island? An island that has its own beaches, boat docks, boat house, tennis court, comfy main house and caretaker’s cottage, and one feature no other island does – a narrow, all but hidden road to a mainland.

It’s called Gun Point and at $23 million, it might be the steal of the decade for those who have a spare $23 million and always dreamed of living on an island but could not quite give up the benefits of civilization.

“The Bahamas is so hot right now, it’s crazy,” said Timothy Smith, a partner at Better Homes & Gardens MCR Bahamas. Smith has handled more transactions in the last six months than many real estate professionals do in a lifetime and is among those who say these are historic, record-breaking times for the industry, especially in the luxury market.

“The pandemic did not just turn the world’s economy on its side,” he says. “It made us re-think our priorities and safety and security most often came out on top. Throughout the pandemic, The Bahamas practiced strict protocols and the total number of cases just hitting 10,000 in more than one year, a number many destinations hit in a day. There were days when we watched the news and saw thousands of new cases in other places and we did not have a single one or the count remained in the single digits.”

Given how fast news spreads, Smith said it was easy for the world’s high net worth individuals and their advisors to focus on The Bahamas, but it was not security alone.

“Add that safety factor to the natural beauty of the country, the friendliness of the Bahamian people, a nearly 300-year history of peaceful democracy and superb airlift including private fbo’s throughout the islands,” he says,” and it is easy to understand the desirability.”

But no listing that he has handled, he adds, has the “magic” of Gun Point. The 80-acre estate is located at the northern tip of Eleuthera, minutes across the water from both the chic Harbour Island and the increasingly sought-after, laid-back island of Spanish Wells famous for its fishing fleet. It is also a short drive down that hidden road to an airport accustomed to private jets as well as commercial aircraft. It boasts nearly two miles of coastline, much of it sandy beach and the property rises to an elevation of 45 feet.

“There is a magic about Gun Point,” says Smith. “The acreage and amenities alone are outstanding with beaches on both sides, a main house with 4,000 square feet and terraces and patios to watch the sun rise and sun set, gardens with your own vegetables and produce, the tennis court, generator, a 2-bedroom cottage making a total of 6 bedrooms and a very substantial dock and boat house with a smaller dock.”

A deep-water channel leading to the main dock was created to accommodate large, luxury vessels. Originally granted by Great Britain to Lord Beaverbrook in appreciation for his service to England during World War II, the property’s history adds intrigue but will not interfere with development.

Smith looks at this island basking in the Eleuthera sun and connected to the mainland of Eleuthera by a narrow, almost hidden road that leads to towns and settlements with food stores, health care, restaurants and more and sees endless potential.

“This property's best use would be an incredible residential development or a hotel and marina concept,” he said. “In its current state, the property is partially developed, including a main owner's house with 4 bedrooms and 4.5 baths and 4000 sq ft of living space. Also, on the property is a caretaker's cottage, gazebos, boat house bar and a 210,000- gallon rainwater catchment system.

“There is lots of value in the boat dock, suitable for large or small boats. There is lots of room for expansion to create a much larger dock or a marina. This property is a boater's paradise. The North Eleuthera area is known as a premiere fishing destination that attracts anglers from across the world.

“Gun Point's potential is endless. It is a perfect canvas for a one-of-a-kind out island development unique to The Bahamas.” 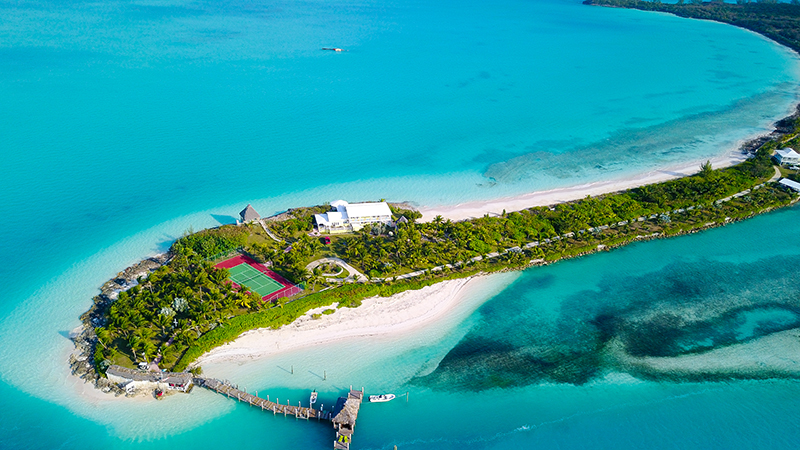