Leno Learning Link: âGoal of a tablet in the hands of every student within reachâ

What seemed an almost impossible dream of putting a tablet into the hands of every student in The Bahamas just four months ago moved a step closer to reality today with a $45,000 donation by Citi to the International Organisation for Migration to provide tablets for students in some of the most economically challenged communities in New Providence.

The presentation by Citi officials was the latest in a series by donors coming forward to join the Leno Learning Link, a campaign created by the leading financial services firm in September.

“When Leno kicked off this campaign at what would have been the beginning of a normal school year with the resumption of in-person classes, the goal seemed so ambitious as to be almost a dream,” said Leno Trust Managing Director Dianne Bingham. “Today, this generous donation by Citi which filters through to the IOM to put tablets in the hands of students in the Kemp Road, St. James Road area and other communities that are especially economically challenged puts us one step closer to making that dream a reality. We want to thank Citi and the IOM as well as our partner, ALIV, which is providing age-appropriate programming for the tablets and connectivity at a greatly reduced rate. This shows what true partnership can achieve.”

Ms. Bingham’s remarks came after a press conference at the Ministry of Education with Education Minister Jeffrey Lloyd confirming that “at last, there is a light at the end of the tunnel.”

“When Leno kicked off the Leno Learning Link initiative with a $60,000 donation and the ambitious goal of putting a tablet in every student’s hand, the Department of Education calculated that there were approximately 41,000 students who were in need of a proper learning device that would enable them to participate in virtual learning,” said the Minister.

“Some were trying to follow classes by using their Grammy’s or a sibling’s cellphone or sharing a laptop with two, three or four others in the household. Too many did not even attempt to participate in this academic year. They were unprepared, as we were. Who could have predicted that a viral pandemic would force us out of the classroom and into a virtual learning environment?”

That jolt, he said, forced the Department of Education to greatly accelerate its virtual learning platform agenda and capabilities, condensing a 5-year roll-out into a single school year.

“Today, with this extremely generous donation by Citi through the International Organisation for Migration, and the many others that have been made, we are seeing a light at the end of the tunnel,” he continued. “And while I always hate to refer to numbers because to me, every student is an individual story, I have to confess that I am especially proud to report that we only need 6,000 more tablets to be able to say, ‘We did it, Thanks to our partners like Leno and ALIV and our many generous donors, we put a tablet in the hands of every student in The Bahamas.’”

Citi and IOM display their generosity through a donation to the Leno Learning Link.

The Education Minister said he was particularly touched by the designation of where donation of tablets was going, noting that he grew up in the Kemp Road area and appreciates the challenges where many buildings still do not have electricity or bathrooms. 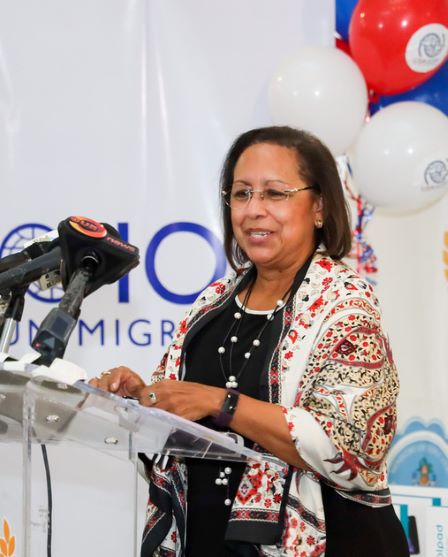 Citi CCO, Margaret Butler speaks to the purpose of Citi and IOM’s partnership to provide tablets and laptops for students in need. Photo by Cay Focus Photography for DPA.

“As a part of Citi’s Covid-19 Relief Efforts and throughout the generosity of our employees we partnered with IOM to reach out to those who may be feeling be effects of this pandemic more than others,” said Citi CCO Margaret Butler. “Through this we reaffirm Citi’s commitment to support economic growth and development in The Bahamas. And we are happy to be able to support the learning, growth and future of young people in The Bahamas.”

With funds being processed through Leno Foundation in partnership with ALIV, the Ministry was able to purchase tablets at a greatly reduced price, $124 per tablet alone or about $175 with three months of high-speed connectivity, including my-fi. In December, Bethel Brothers Morticians donated tablets to Albury Sayle School on Nassau Street, an institution they have long supported. That same month, Nassau’s popular eateries Bamboo Shack and all the restaurants that are part of The Myers Group – KFC, Pizza Hut, Burger King, Dunkin’ among them – agreed to raise money through customer contributions with Bamboo Shack launching its drive with a $12,500 donation and The Myers Group saying they were determined to drive the campaign over the finish line.