Albany Bahamas and Bakers Bay Golf and Ocean Club contribute to development of professional golfers in The Bahamas Nassau, Bahamas â The Bahamas Professional Golf Association would like to acknowledge Albany

The Bahamas Professional Golf Association would like to acknowledge Albany Bahamas and Bakers Bay Golf and Ocean Club for their contribution and continued development to golf professionals in The Bahamas. Two pros who received their support were Keno Turnquest and Raquel Riley.

Albany was instrumental in assisting Keno Turnquest in obtaining a British PGA, Class AA Certification from the University of Birmingham while he worked at Albany. He is currently the first assistant golf pro at Albany Bahamas.

In 2004, Turnquest started as an assistant golf professional at The Abaco Club under the tutelage of Tom Mackenzie. Turnquest turned pro a year later and during the next 6 years, he won multiple times in the Bahamas Professional Golfers Association championships and was part of the world cup qualifiers for The Bahamas.

In 2010, Turnquest joined Albany Bahamas as a services manager and was promoted to assistant pro two years later.

“Obtaining my Class AA Certification was strenuous because of the written exams and having to play in 8 events a year to maintain a certain golf average. Class AA is for certified golf professionals who are serious about working in the industry,” said Turnquest. “Besides the game, it has a lot of elements like business management, golf equipment repairs, marketing, health focus – physiology and biomechanics, finance, and purchasing.”

Turnquest further said, “Albany is interested in the betterment of the tourism industry and Bahamians, and they want to create an internationally renowned product. I appreciate the support that I have received from Christopher Anand and Damien Mitchelmore for helping to further my education and career.”

Raquel Riley started her career at Bakers Bay in 2012. While caddying for the Buccaneer Tournament, her proficiency caught the attention of golf director, Peter Whalen, who is currently the GM. He hired her as the first female golf pro at Bakers Bay to fill the role of assistant golf professional. Bakers Bay further invested in Riley’s LPGA Club Professional Training.

At a young age, Riley started golf under the tutelage of Vernon Lockhart. She graduated with a BSc (Hons) in Sports Management at Hampton University, where she played for 4 years, earning MVP in her junior and senior years.

She has also worked for the PGA Tour Championship in Houston, Texas, and it was during that year that she earned experience in all aspects of tournament operations. For a few years, Riley played pro golf on the Futures Tour traveling around the United States and captured her first victory in 2008 at the Magnolia Ladies Championship on the Sun Coast Ladies Tour in Florida.

I feel that my role is to help future golfers start with the right fundamentals of the game and learn golf the right way,” said Riley.

Chris Lewis, president of the BPGA acknowledges the corporate support from Albany and Bakers Bay. “Thanks to these corporate sponsorships, these two fine golfers like Keno and Raquel are able to contribute their skills and expertise to the members and clientele as well as to represent our country well,” he said.

Lewis is the president of the Bahamas Professional Golfers Association and is a Class A golf professional who has held many posts within the BPGA, including past-president (2010-2012). He has been elected to serve another two-year term from 2020-2022.

While on a golf scholarship, Lewis obtained his BA in Business Administration from Texas Southern University in 1992. Ten years later, he obtained a specialized associate degree in golf complex operations and management from the San Diego Golf Academy where he graduated with a 4.0 average and was a Valedictorian.

In Grand Bahama in 2003, Lewis worked as an assistant golf professional at the Royal Oasis Resort. From 2003-2011, he was the director of golf at the Cable Beach Golf Club in New Providence, and he then moved to Bakers Bay Golf and Ocean Club in Abaco as a golf pro. Upon returning to Freeport, Lewis joined the Reef Golf Club in 2011 as a director of golf and maintenance and currently holds the position of golf superintendent.

Other executives of the BPGA include Keno Turnquest as treasurer, Glenn Pratt, a master golf instructor, was secretary and is now appointed as an executive director while Raquel Riley, who joined the BPGA in July has stepped in to take on the role of secretary.

“Although COVID-19 has restricted us, we continued our work,” said Lewis. “Raquel is the first female executive committee member of the BPGA, and we are truly pleased to have her representation which will bring good diversity and perspective.”

The Bahamas Professional Golfers Association has a good relationship with all of the golf courses in The Bahamas and welcomes membership. For more information about the BPGA, please contact Chris Lewis at 242-727-1690 or by email at clewisgolfpro@hotmail.com. 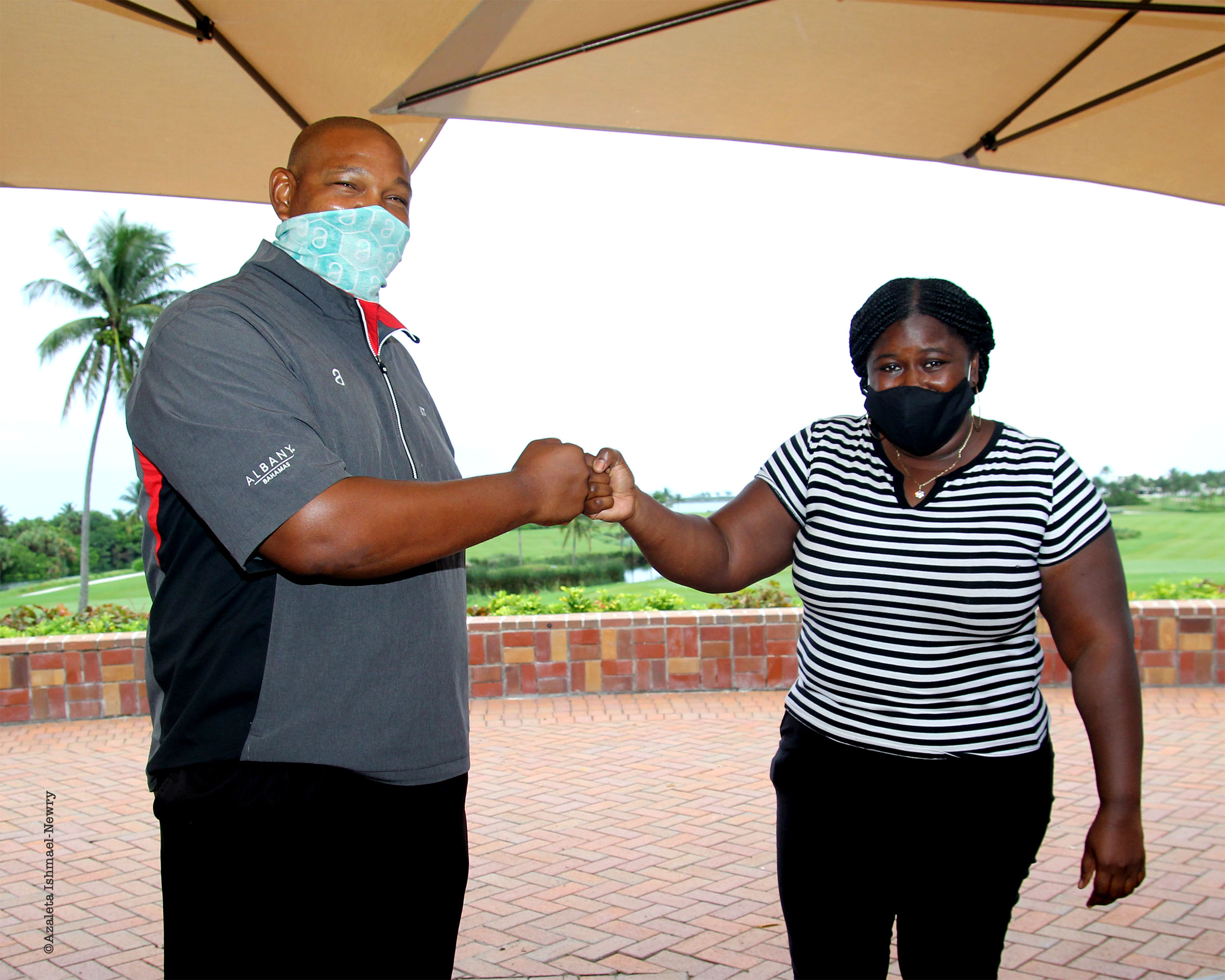 In the photo shown, Keno Turnquest (left), treasurer of the Bahamas Professional Golfers Association (BPGA) welcomes pro golfer, Raquel Riley (right) as the first female member of the BPGA at the elections that were held in July 2020 at the Ocean Club Golf Course. Recently, Riley was appointed secretary of the BPGA, with Glenn Pratt, master golf instructor who was secretary, now appointed as executive director. Chris Lewis remains the BPGA’s president and Keno Turnquest as treasurer. Photo by Azaleta Ishmael-Newry