Godfrey Kenneth Kelly has been presented the Insignia of Knight Commander, the Most Distinguished Order of Saint Michael and Saint George, KCMG. Governor General, His Excellency, the Most Hon. Sir Cornelius A. Smith, ON, GCMG, made the presentation during an Investiture Ceremony held at Government House, September 28, 2020.

Sir Godfrey is the second person to be knighted at a local investiture, in The Bahamas.

The Governor General congratulated Sir Godfrey and thanked him for his many contributions to the country.

“On behalf of Her Majesty, the Queen, I wish to offer my congratulations to you. May God continue to bless you and your family,” he said. “ You have provided stellar leadership during your career and have provided exemplary service to our country, and for that we thank you.”

Sir Godfrey expressed his gratitude for being recognized in this way: “I have lived a very long life at 91, almost 92. And I have really enjoyed my journey thus far,” he said. “I am really grateful and truly appreciate this gesture.”

His early education began at Queen’s College, then at McDonogh College Prep School in Baltimore, Maryland, before he embarked on training in law at Cambridge University and Middle Temple, London. He practiced law for 66 years, notably at Higgs and Kelly, before retiring in June 2019.

He has served in many capacities over the years, including at the Bahamas Bar Association; as elected representative for the Cat Island constituency in l956, 1962 and l967; as Minister of Education subsequent to the introduction of ministerial government under the United Bahamian Party administration. He was also appointed to the Senate in l968.

Sir Godfrey is a keen sportsman and enjoys tennis, skiing, shooting, fishing and boating. He and the late Sir Harold Christie were founders of the Cat Island Regatta, an annual event since l956.

He has received many awards for his service in civic society. He is married to Sonia, nee Duncombe, of Nassau. 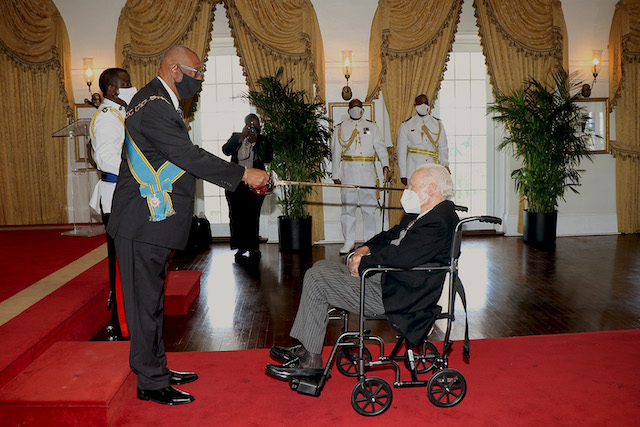 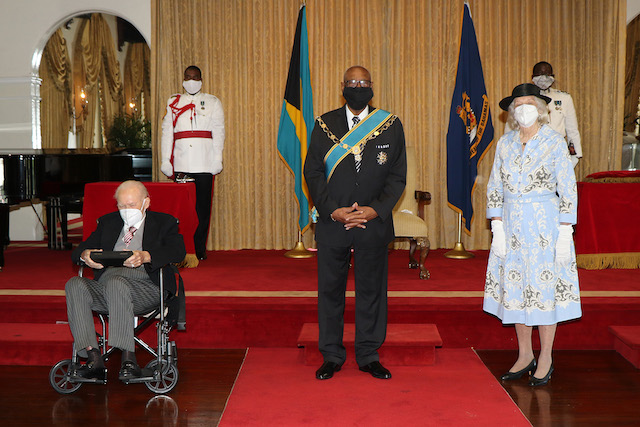 Godfrey Kenneth Kelly received a knighthood during an Investiture Ceremony held at Government House on Monday, September 28, 2020 conducted by Governor General, His Excellency the Most Hon. Sir Cornelius A. Smith. (BIS Photos/Letisha Henderson). 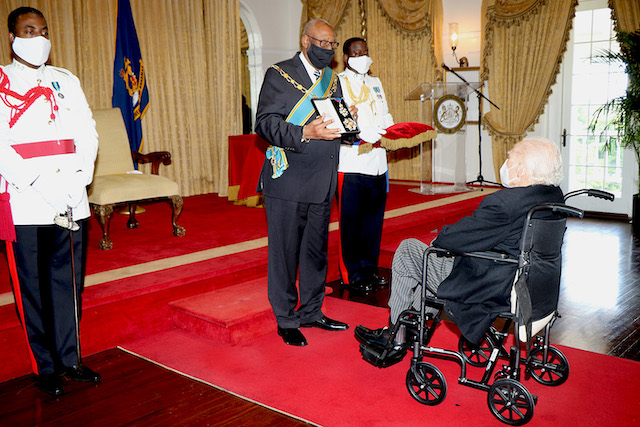