Out of more than 170 entries from 44 countries Bahamian twelfth grader Sierra Blair captured first runner-up in the Girls’ Voices at Home video challenge – a competition which invited young ladies ages 13 to 26, to share how they are staying strong and continuing their education during the COVID-19 pandemic.

As first runner-up Blair received a $500 cash scholarship from the Seattle, Washington-based organization. A 21-year-old college student identified only as Debrah A. from the Philippines placed first, winning the $1,000 scholarship. Second runner-up was 17-year-old Alina M. from Belarus in Eastern Europe. She also received $500.

“Although I didn’t place first, I was over the moon happy since it was my first-ever video competition and I’ve only edited eight videos since I picked up the skill in March, during the lockdown,” said Blair.

The 16-year-old developed her storytelling skill as a children’s author. She launched her first book, Roman & His Mean Family on Amazon when she was only 13. Blair followed that up with her second book, Roman & The Pink Flamingos in 2018. Prior to the pandemic, it was sold at the Atlantis Resort, Ardastra Gardens and to the Ministry of Education.

Blair, who aspires to become a chef, developed her video editing skills after launching her Sierra & Roman’s Cooking Show on YouTube in March. Roman is her four-year-old brother.

“After posting the first episode of my show, my video editor’s computer crashed. I had to take matters into my own hands and learn how to edit my own videos if I wanted to continue the show, which I most definitely wanted to do,” said Blair.

“Learning to edit videos was borne out necessity not really an interest, but after editing the second show I thought this was a really cool skill.”

“At first, I wasn’t interested at all,” said the Principal Honor Roll student. “What changed my mind was I kept seeing their ads. I thought let me just click on it and see what it’s about.”

For several days, Blair mulled over the video project. Once she decided to enter, it took about a week to draft her script and shoot video clips for Girls’ Voices, a program which provides training, education and scholarships to keep girls in school. It is an initiative of GreaterGood.org a US-based nonprofit organization that works to improve the health and well-being of people, pets and the planet.

After canvassing the competition, Blair was optimistic about her chances of winning.

“I tried not to hype it up too much in my mind. I know from first-hand experience when you think you’re going to win something and you don’t that can be disappointing, soul-crushing even,” said the private school student.

“My advice to other students would be to not let fear of failure hold them back from competing. I would recommend competing globally because you have anonymity. Nobody knows you didn’t win unless you tell them.” 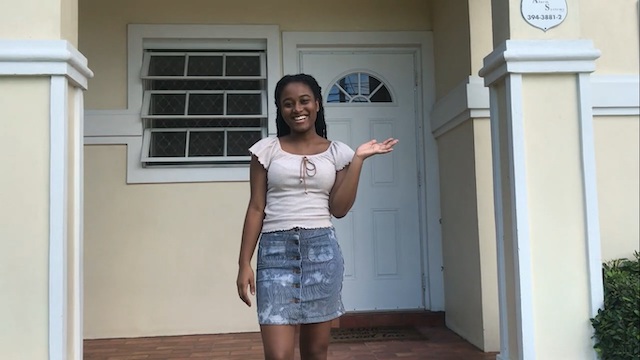