It started as a conversation between friends, one a restauranteur, the other a real estate legend, about how to help feed the hungry in the era of COVID-19.

In no time it morphed into Pasta Fridays and ended last week with cheers, tears, music and memories as nearly 30 volunteers looked back on nine weeks of service to others and a record they will never forget.

“We served almost 40,000 meals,” said Mario Carey, Better Homes & Gardens MCR Group founder and president. It was Carey who approached his friend, Paolo Garzaroli, with what seemed like an almost impossible request – to turn the Garzaroli family’s luxury hotel and restaurant property into a feeding kitchen for whoever wanted to come and collect food every Friday. 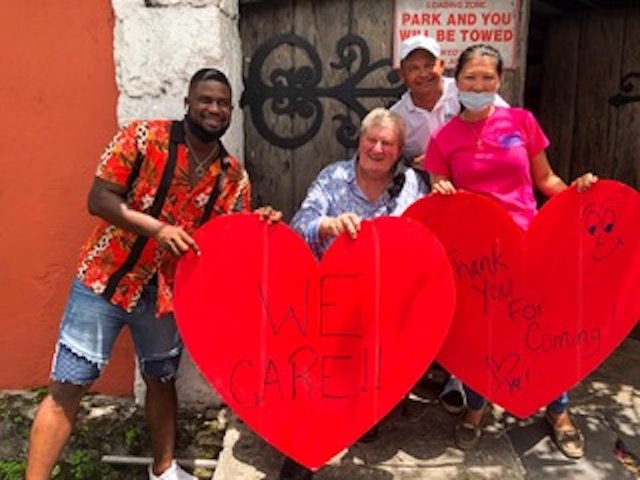 Garzaroli’s eyes lit up and within days, the first 5-star restaurant in the Caribbean complete with chefs and other staff who had been furloughed during the pandemic, the entire Garzaroli family, sponsors like Central Supercenter and all of Carey’s real estate team were in the kitchen prepping, cooking, seasoning and piling pasta and the trimmings into disposable containers for collection.

“It’s a lot of hard work,” says Better Homes & Gardens MCR Group team member Ashley Bethel as she took a break on the last day of Pasta Friday to talk about the experience. “But when Mario mentioned it, there were no questions asked.

Everybody jumped on board. We get in the kitchen early and get a little assembly line going, get the music going and as the morning goes on the assembly line grows and we are just moving faster and faster.”

“It is a lot of work but it’s a great experience,” he says, echoing Ashley Bethel’s thoughts of hard work and powerful reward.

“It’s our civic duty and it is a good team-building experience. We closed our office every Friday for nine weeks to come and do this, but when you think about how many people you are helping, how many you are going to interact with, you know you are doing something worthwhile. It’s been great.”

Graycliff’s kitchen that normally turns our 5-star meals is transformed into an assembly line of volunteers helping to feed Bahamians, particularly in the neighbouring Bain and Grant’s Town communities. The all-volunteer effort was an initiative of Graycliff Hotel & Restaurant and Better Homes & Gardens MCR Group with strong support from sponsors like Central Supercenter.

Graycliff Hotel & Restaurant’s CEO, Enrico Garzaroli and the volunteer team of 5 chefs created the weekly meal menus which rotated to include the freshest ingredients that week. Dishes ranged from pork to pasta, shrimp to turkey or chicken.

Volunteer chef John Miller, who cooked three days each week said, “I’m proud to have been a part of this initiative which helped so many of my fellow Bahamians. It humbles me to know that our efforts fed so many needy persons during these two months.”

Along with music legend Julien Believe on the final day, there was a special guest for the Friday event – Michael Wells, a quadriplegic who is the self-taught author of nine books of short stories, all written via a laser dot on his forehead communicating with the computer screen.

It was his first time at Graycliff and it was only when Mr. Wells, in his Sunday best wheelchair, was taken to watch the bevvy of activity in the kitchen that work stopped for a moment, the room grew still and then burst into applause with dozens of volunteers cheering the man who knows what it means to overcome a lifetime of hurdles. “It put our work into perspective,” said Garzaroli. 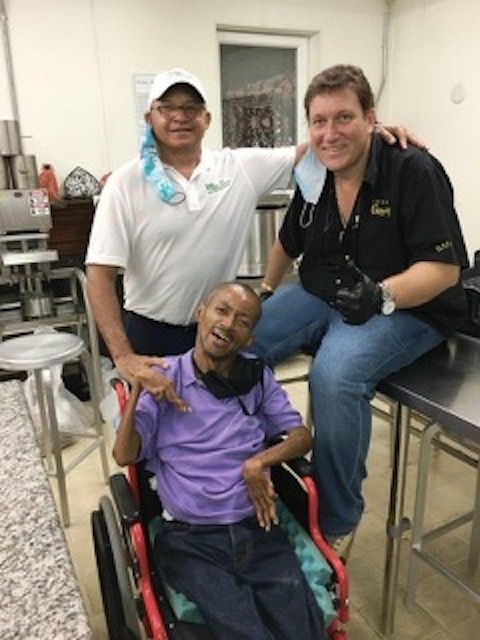 Quadriplegic author Michael Wells was a guest of honour during the final day of Pasta Friday as he celebrated his birthday with a visit to the feeding initiative and the world-famous Graycliff property. He is pictured here at Graycliff Hotel’s The Piazza with Pasta Friday Founders Mario Carey, left, Paolo Garzaroli, right.