Bahamian Brewery on Track to meet its Rebuild and Restoration Goals

Bahamian Brewery & Beverage Company Limited and Bahamians across the country have been counting the months, weeks, and days for production to resume on the company’s Truly Bahamian brands. Over the past few months, the company has marked a series of major milestones as it moves toward the official relaunch of the Brewery’s Grand Bahama operation and the return of its popular brands, including Sands, Sands Light, and Bushcrack.

Already, the company has renovated and reopened the Grand Bahama retail operation, rebuilt and expanded the Abaco store, and launched a new Jimmy’s retail location located on East Bay Street in Nassau. “Despite being in full recovery mode, my team has not missed a step in continuing to meet the needs of our customers,” said General Manager Gary Sands.

Last month, the company celebrated yet another major milestone with the addition of the world-renowned Pernod Ricard brands, which include Absolut vodka, Jacob’s Creek wines, and Perrier Joulet champagne just to name a few, to its already impressive portfolio of wines and spirits. “It’s another feather in our cap,” noted CEO Jimmy Sands. “I am so pleased to add these lines to our Jimmy’s resources. It makes the whole company much stronger and well rounded as a beer, wine, and spirits company”

Back in September, the company’s factory was inundated by 4ft of storm surge. The floodwaters collapsed tens of thousands of cases of product, soaked storage boxes, saw saltwater intrusion of the brewery machinery, and totally decimated the retail store. Determined not to let the devastation derail the family business, Jimmy vowed ‘This Boat will Float’, referencing his man in the boat logo and his determination to rebuild his legacy. Speaking to his staff of 140, the team immediately put their shoulders to the wheel and began the process of rebuilding.

“I am extremely impressed with the progress that we have made so far,” said CEO Sands. “The cleanup alone was a task in itself” he recalled, “but our staff has done an exceptional job and it’s great to be at the point in our restoration where we’re putting back instead of tearing down.”

The rebuilding process, now six months underway, has not only included the restoration of the physical structure, but also the replacement of the company’s state of the art brewing equipment.

“We have partnered with professionals out of Germany to manage the reinstallation of all our equipment” explained General Manager Donny Delahey, “working with them has been a real pleasure and they’ve done an excellent job.”

However, with the onslaught of the Coronavirus, this will definitely have an effect on the commissioning date of the plant. “At this moment, we are in the midst of reassembling the machinery but there will be some interruption due to travel restrictions which impact the technical experts coming from Germany,” noted CEO Sands.

As work continues on operations in the Northern Bahamas, the company has been excitedly preparing a contest for its fans celebrating the return of the Sands brand. Stay tuned to the Sands Beer social pages for details on how you could enter for the chance to win a trip to Freeport to tour the rebuilt brewery and get a beer fresh off the bottling line!” “This is our way of saying thanks to our many customers who have continued to support us all these years,” said Gary Sands. This has been a long journey, but we are especially proud that we have been able to keep our boat afloat and do so with our entire staff behind us.”

Restoration efforts continue at the Bahamian Brewery and Beverage Company's manufacturing facility in Grand Bahama. Nearly six months post Hurricane Dorian, the company is on track to meet its restoration deadline and resume production of its six signature brands. 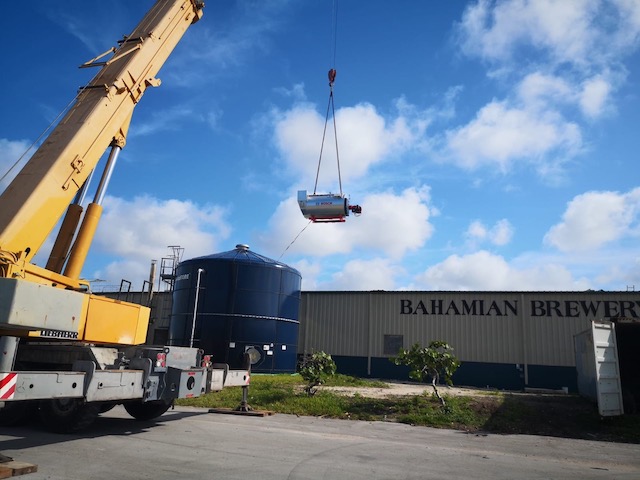 The Bahamian Brewery and Beverage company teamed up with German Brewmasters BREWTECH to replace and reinstall the company's state of the art equipment which was destroyed by the storm. 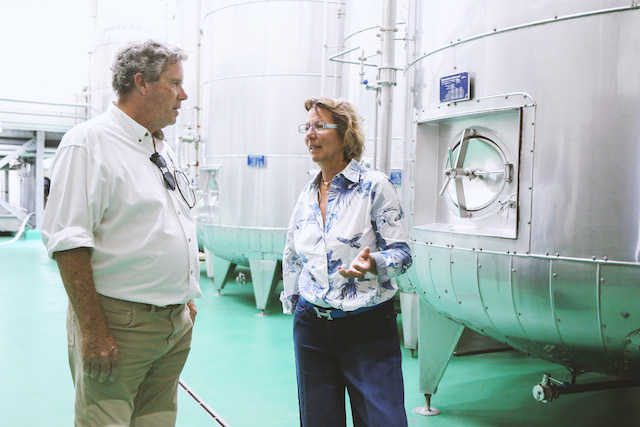 Acting Chairman of the Grand Bahama Port Authority (GBPA) was invited by Bahamian Brewery CEO Jimmy Sands to tour brewery facilities on Grand Bahama island in preparation for the plant's reopening and the relaunch of its popular beer brand.