Environment Minister Challenges Rotarians to Clean Up, Beautify and Win $10,000 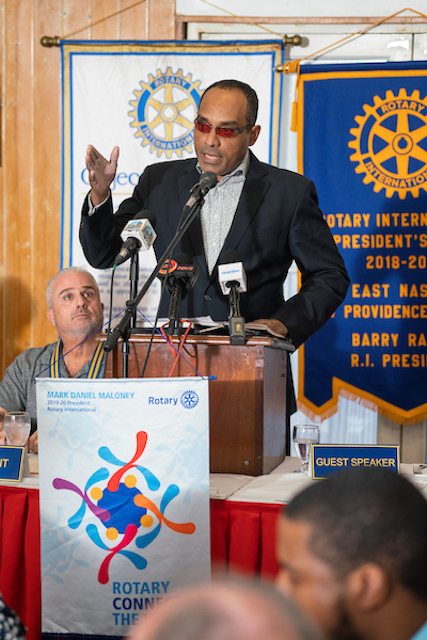 A popular campaign that persuaded students to beautify their environment is offering civic groups a $10,000 cash prize for executing a project that helps make the Bahamas cleaner, greener and more pristine, Minister of Environment and Housing Romauld ‘Romi’ Ferreira told Rotarians on Friday.

The Rotary Club of East Nassau was the latest stop on the environment minister’s tour as he challenges civic groups to envision a different kind of Bahamas, one brimming with creative energy and free of environmental ills. Last week, Ferreira spoke to more than 2,000 congregants at four Big Harvest Church services and he has continued to make the rounds of neighbourhood associations.

“We just came off one of the hottest summers in record,” said Ferreira. “We just are recovering from Dorian which was the strongest hurricane in the north Atlantic since they have been keeping records so we know that this is an issue. The problem that we all face is that scientific data gives us valuable information but it can’t really tell us what to do, certainly what the right thing to do is. I’m posing a question to this Rotary club: what would be your right thing to do in response to the broader questions of climate change and our world changing and what we could do in our own communities in relation to the Be A Hero association competition.”

The popular caped crusader campaign launched in October 2018 by encouraging primary and junior high schools to identify a project that improves their school grounds or nearby communities.

“That was our first task because we figured that if you’re 40-years old and you’re throwing garbage out of your car there’s nothing else we could do with you except to prosecute you and this is why we re-established the environmental prosecution unit,” Ferreira said. “The Be A Hero with the children was to get a critical mass of children believing that they could have a different country, different from the one that they are possessing right now and will possess in the future.”

Ferreira’s message is simple: there is no such thing as too small when it comes to the environment. Little things like removing litter and cultivating gardens make a big difference, especially when everyone gets involved.

Now in its second phase, the Be A Hero campaign is inviting civic clubs, neighbourhood associations, church congregations, corporate groups or other organizations that want to participate to choose from one of three categories – designing and building a water feature or cooling station in a public space, cleaning up and beautifying a park, abandoned building or transforming other eyesore or creating public art from recycled materials, including abandoned vehicle parts. If using parts from vehicles or other debris that is cluttering an area, the trash has to be hauled away and properly disposed of as part of the new art project.

Minister of Environment and Housing Romauld ‘Romi’ Ferreira challenges Rotary Club of East Nassau members to take on a sustainable environmental recycling or beautification project for the Be A Hero community campaign, saying there is $10,000 in prize money donated by Royal Caribbean.

Minister Ferreira displays the Be A Hero community campaign poster explaining the ways in which the Rotary Club of East Nassau can participate in the challenge. 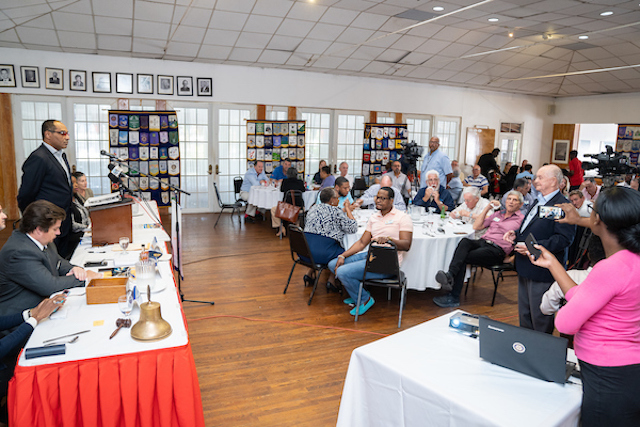 Super Value chief Rupert Roberts Jr. congratulates Minister of Environment and Housing Romauld Ferreira, at podium, on single use plastic ban concept saying consumers have purchased some 75,000 reusable bags since the ban started. Roberts did ask for government to consider other matters connected with the ban.

(Photos by Ronnie Archer for DP&A)