For nearly 50 years, David Barry worked at one place. He became a Painting and Decorating student in 1969, back when The Bahamas Technical and Vocational Institute (BTVI) was known as Nassau Technical Centre.  He went on to become an apprentice and after nearly five decades of teaching, recently retired.

BTVI, which was once fully under the Ministry of Education, became semi-autonomous in 2013 and when Mr. Barry retired two years later after 44 years of service, the institution retained him. Hence, from his days as a student to his days as an instructor, Mr. Barry has been coming to the Old Trail Road campus for 50 years - 48 as a worker.

“It’s been an exciting journey. I enjoyed just about every moment of it. It’s been a long journey and I don’t regret it…I’ve seen this place go through name changes, I have seen this place start as a simple training centre to today being an institute on par with institutes in the US and Canada because of the curriculum.  I look at BTVI as a community college,” said Mr. Barry.

Mr. Barry was recently publicly recognized for his nearly 50 years as an employee. In an interview afterwards, President, Dr. Robert W. Robertson expressed gratitude for his service. “Clearly, Mr. Barry loves what he has been doing these many decades and has shown dedication. For those who have moved on, it doesn’t mean they weren’t dedicated because one can be here for a year and be dedicated; however, Mr. Barry’s longevity at this institution is truly commendable and one to be admired. He has certainly set the bar high and we thank him for his service,” said Dr. Robertson.

Mr. Barry, who grew up on Harbour Island, came to New Providence to study a trade, but admittedly, was unsure what he wanted to do.  He was subsequently placed in the Painting and Decorating program.

With eight classmates and under the tutelage of Englishman, John Hutcheson, Mr. Barry was in the program for one year before being chosen by the institution’s administration to become an apprentice. He was the top choice of the two students who passed the London base City and Guilds certificate in painting and decorating. It was a nod of confidence for the young David. The apprenticeship lasted another year before Mr. Barry became an employee of the Ministry of Education in 1971, spending over four decades as a public servant, but working at what evolved into BTVI.

During this time, Mr. Barry was afforded opportunities for further training.

“This became C. R. Walker Technical College and it merged with the College of The Bahamas (COB) at one point.  They wanted me to teach Auto Repair, so they sent me to study a diploma in the field at Alpena Community College in Michigan. That’s how I got another skill under my belt,” he stated.

Reminiscing on some of the highlights of his tenure primarily teaching painting and decorating, Mr. Barry said heading the program and eventually teaching on the family islands were gratifying.

“A few years ago, BTVI’s construction trades’ instructors conducted courses on the weekends on several islands including Andros, Abaco, Harbour Island and Eleuthera. From carpentry to drywall and plumbing to tiling, to see the faces of the islanders who were so pleased that we would come there and teach them these trades was a good moment,” he stated.

“Another highlight is the fact that there is a graduate of mine named Patreka Ferguson, who went on to become supervisor of the painting section of the Ministry of Works. Her daughter later became a student in the same program,” said a beaming Mr. Barry.

Over the years, Mr. Barry has also taught painting and decorating to at-risk youth, including residents of the Simpson Penn School for Boys and the boys of Program Sure.

Mr. Barry has shown such versatility that he has also taught a Trade Career Path course to high schoolers in a dual enrollment program at BTVI.  For the 15-week program, they were introduced to the fundamentals of several construction trades including: Electrical Installation, Plumbing, Masonry, Carpentry, Heating Ventilation and Air Conditioning (HVAC), Welding, and Painting and Decorating.

“Teaching young men is my passion. I’ve touched many lives and am stilling doing it. They are my clients. They want a father figure,” he said. 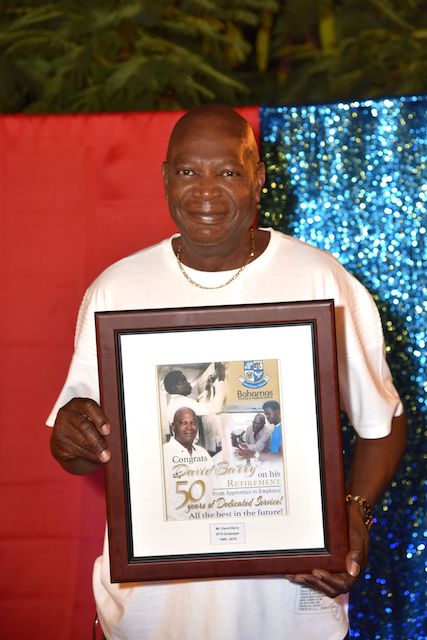 David Barry became a student of the then Nassau Technical Centre in 1969 – now Bahamas Technical and Vocational Institute – and in 1971 was hired as an employee. He has worked at the institution for nearly 50 years and said touching lives was most important. 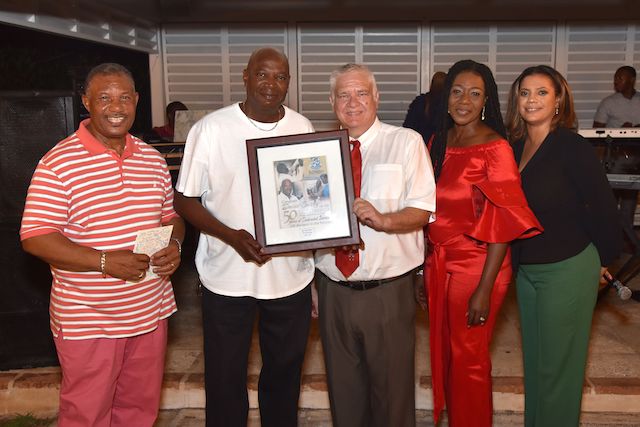