Carnival Corporation & PLC signed a Memorandum of Understanding with the Ministry of Health and the Public Hospitals Authority to assist with funding flood damage repairs as well as basic restoration efforts to the Rand Memorial Hospital, Grand Bahama. The MOU was signed at the Ministry of Health, Thursday, November 7, 2019.

Minister of Health, the Hon. Dr. Duane Sands explained that at the Rand, one of the major healthcare facilities here in The Bahamas, there was a significant problem with black water flooding, so much so that about 70 per cent of the square footage of the hospital was put out of commission.

In the meantime, he noted that acute care services for the most part are provided in the field hospital right across the street.

Dr. Sands said Carnival Corporation, which has been “an integral part of our tourism product and that has found The Bahamas to be their home,” recognized the challenge with the Rand Memorial Hospital and health services in Grand Bahama in general, so they decided to partner with the Ministry of Health and the Public Hospitals Authority to help remediate the challenges at the Rand.

“So together with at least one other organization, Direct Relief, the Carnival Corporation has committed to remediating the damage to the Rand Memorial Hospital to get it back up and running and also to re-equip the hospital.”

The Minister said it is hoped that the work will be completed by the end of March 2020, which is the end of Samaritan’s Purse International Relief Organization’s engagement. The Organization has been delivering healthcare services on the islands of Abaco and Grand Bahama since the aftermath of Hurricane Dorian.

Senior Vice-President, Carnival Corporation, Capt. Michael Kaczmarek stated that the Government requested two things from the company: re-starting their business back on the island of Grand Bahama and to The Bahamas, as well some help with the hospital.

Capt. Kaczmarek said that Carnival took a look at the hospital and realized that it had taken substantial flooding damage; shortly after that they offered the government help to stabilize the situation and do some basic remediation for the hospital.

“We have a long relationship with The Bahamas and we feel as partners that it just makes sense for us to be able to help out in these areas where we can.”

The Senior Vice-President explained that the actual cost of the work is uncertain at this time, but it is substantial, and there is also time pressure because of the potential for mould.

He also noted that while a few specialists will be coming from Puerto Rico where they are doing similar work, most of the work should be completed by volunteers from Grand Bahama shipyard. 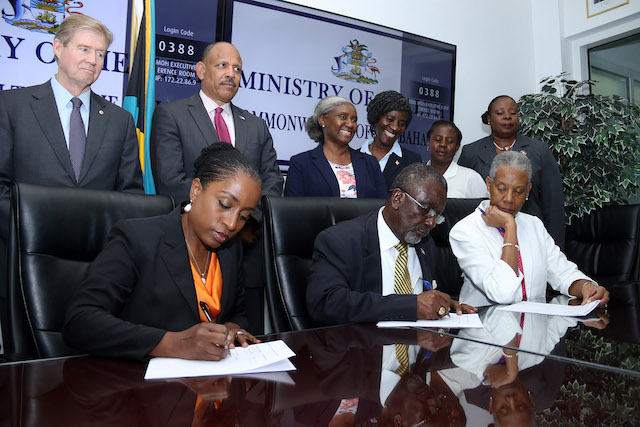 Minister of Health the Hon. Dr. Duane Sands (standing centre) led press conference with officials from the Ministry of Health and the PHA, along with executives of Carnival Corporation & PLC after the MOU signing.