Three young Bahamians got all the Halloween costumes they’ll need for a lifetime and memories they will never forget – they were crowned winners of the Ministry of Environment and Housing’s Be A Hero campaign and decorated with Superman capes and trophies during a ceremony hosted by Atlantis October 31.

“We launched the Be A Hero campaign last November searching for environmental heroes, using an approach that was fun and light-hearted to deliver a serious message – that the environment is everyone’s personal responsibility and that responsibility begins when you are young,” said Environment Minister Romauld ‘Romi’ Ferreira.

“If we are going to truly protect and preserve our environment, if we are serious about saving this beautiful country called The Bahamas in the face of the increasing pace of climate change, we have to start with sensitizing the generation that will inherit this land. Today I am thrilled to say that the results we saw during the months of the campaign and the interest and enthusiasm we witnessed as we went from school to school was incredibly reassuring and heartwarming. It renewed my faith that the environment of The Bahamas has champions and many of the best are still in primary school.”

The Minister and team, including the marketing firms that partnered to develop the program, visited 19 primary and junior high schools in New Providence over several months, sharing information about conservation and preservation. They focused on the importance of protecting natural resources, explained the relationship between litter and crime and challenged students to come up with ideas to improve their community or school grounds. Students, classrooms or entire schools submitted their ideas and plans to social media pages. Winning entries were judged on creativity and impact.

Overall school winners were Adelaide Primary School and St. Cecilia Catholic School with two students from St. Cecilia and one young boy from Abaco walking away with individual hero honours.

“I am excited to name Adelaide Primary and St. Cecilia schools that demonstrated they are true environmental heroes,” said Ferreira. “We were blown away by Adelaide where every single student participated in a program, delivered grade by grade through poetry, readings, performances and charts, showing how deeply they cared and how much they knew and culminating in the planting of a banana tree with the assistance of the spouse of the Prime Minister, Mrs. Patricia Minnis. It was clear that at Adelaide Primary students took the entire picture of the environment seriously and were very proud of their school grounds and the surrounding area they cared for and nurtured.”

“Young Olivia Cambridge, her younger brother, DeMarco Darville (from First Step Academy) and their helper TaRon Thompson, took it upon themselves to lead a schoolwide effort to clean up the streets all around the school grounds,” said Ferreira. “We watched as they put on sanitary gloves, took large trash bags and spread out like a marching army of waste managers. And they did it day after day. The sidewalks were spotless. You could have had a picnic around the school and you wouldn’t dare leave a trace behind.”

The other winner, 9-year-old Elrine Bongon, was a student at St. Frances de Sales in Abaco who followed the program online and took it upon himself to find scrap plywood, prime and paint ‘Please do not litter our beaches’ signs. He took one of the signs to a town council meeting, urging adults to follow the advice and with his parents’ help, erected signs on South Abaco beaches urging everyone using the beach to keep it clean. Displaced by Hurricane Dorian, Elrine is now in school in Nassau where he found himself in the same classroom as another winner, Olivia Cambridge, both now at Aquinas.

Asked if he thought his signs had made a difference in people’s behavior, Elrine said they did.

“I definitely saw a decrease in the amount of litter on the beaches so I think the signs were very effective,” said the young hero with the kind of sophistication and poise of someone much older than a child whose age is still in the single digits.

“We wanted to reach young people in a way they would relate to so we engaged their heroes – athletes like Shaunae Miller-Uibo, Buddy Hield, Jonquel Jones, Chris ‘Fireman’ Brown, and performers like Wendy and Dyson Knight,” said Sarah Kirkby, Barefoot Marketing, and Diane Phillips, Diane Phillips & Associates who partnered in the project. “We also wanted them to appreciate the civic leaders so we were very pleased when Nancy Kelly and Ed Fields agreed to be quiet heroes, delivering the message of leadership by example.”

Both public relations and marketing firms say the program would not have been possible without corporate sponsorship, paying special tribute to Tribune Media Group at the appreciation luncheon. The daily newspaper ran tens of thousands of dollars of advertising support without charge and radio at greatly reduced rates. If it takes a village to raise a child, imagine what it takes to protect the environment but all of these troopers pooled efforts to become super heroes in the Ministry of Environment’s Be a Hero campaign. Pictured at an appreciation lunch hosted by Atlantis are representatives from several of the dozen-plus sponsors including AML Foods-Solomon’s, Atlantis, Bahamas Waste, The Sign Man and platinum sponsor The Tribune along with winning students and teacher from Adelaide Primary and Minister of Environment and Housing Romauld ‘Romi’ Ferreira, rear, 4th from right. 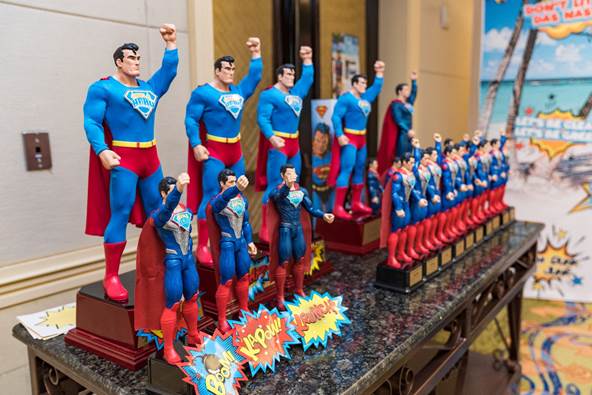 No ordinary plaques for these winners – Sponsors and winners of the Ministry of Environment’s Be A Hero campaign walked away as super heroes, each with his or her own Superman trophy. 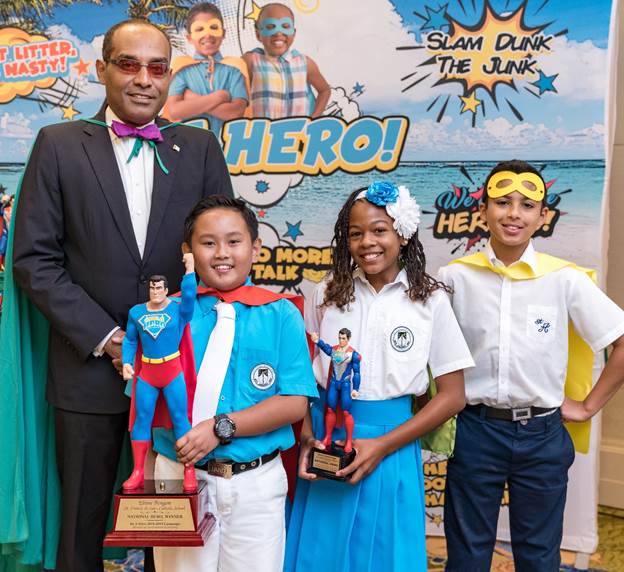 Environment Minister Romi Ferreira congratulates three of the role models who showed you are never too young to be environmental stewards. Pictured with Ferreira are Elrine Bongon, who handppainted and erected signs urging people to keep Abaco beaches clean (before Dorian), Olivia Cambridge, who led her former school, St. Cecilia’s on a daily community trash collection initiative leaving nearby sidewalks and streets spotless, and Sebastian Major, the video star for the campaign who earned his role by standing up to adults whenever he saw them litter. 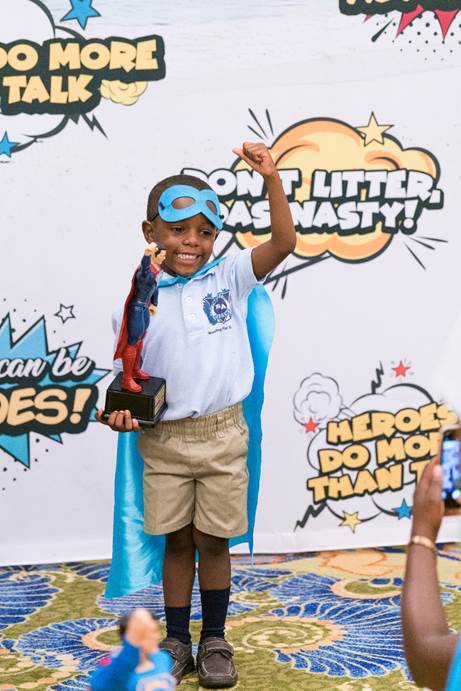 Demarco Darville stole the show at the appreciation luncheon for sponsors of the Ministry of Environment’s Be A Hero campaign sponsor appreciation luncheon October 31 hosted by Atlantis. The young super hero helped big sis Olivia and others at St. Cecilia clean up the community near the school on a daily basis, leaving sidewalks, lawns and verges spotless day after day, proving that the campaign’s goal of changing the mindset about personal responsibility for surroundings starting with the young hit its target.

Photos by Ronnie Archer for DP&A