Annual Sporting Event to Go on Despite Dorian Damage

The countdown to Grand Bahama’s premier triathlon event is on. Come November 2nd, international and local triathletes will put months of training to the test to compete in the annual Conchman Triathlon, despite damages sustained by Hurricane Dorian.

Now in its 33rd year, the oldest triathlon in the country has provided an environment of friendly competition for both residents and visitors while encouraging the benefits of physical activity. Set against the backdrop of Grand Bahama Island’s beautiful Taino Beach, which was undisturbed by the storm, participants will run, bike, and swim their way to triathlete success.

“The Grand Bahama Port Authority is going full steam ahead to support the 33rd Conchman Triathlon” explained GBPA Chairman, Sarah St. George. “We want the international community to know, that Grand Bahama is back and we are ready for the tourist season and ready to host events again.”

For over a year, organizers have been actively planning the event, which has garnered major local and international interest registering participants from Grand Bahama to Switzerland. The recent passage of mega hurricane Dorian however, raised questions about whether the event could continue as planned.

“More than 50 athletes have already pre-registered for the event after hurricane Dorian,” explained organizer and GBPA Conchman Chairman, Christopher Baker. “We’ve had lots of inquiries from international participants who expressed concerns, but we are happy to report that we are ready to press on, as a testament to Grand Bahama’s continued resilience.” He advised that hotels are open to accommodate our guests.

Since its debut in 1986, the triathlon has set a high standard of competition, which the planning committee expects to continue this year In addition to attracting world-class triathletes, the event has continued to receive major support from local schools as well, with scores of students signing up to volunteer along the course, and to compete in the Secondary Schools Competition. Not only will this give them a front-row seat to an amazing level of athletic talent, but it helps them fulfill requirements for their Governor General Youth Award as well.

This year’s event will, for a 2nd year, receive some major support from New-Providence-based bicycle shop: Cycles Unlimited who will be on hand to help participants get their bikes ready both on the day before the race, on Friday at the Flamingo Hotel on Taino Beach, and then again on race day. Organizers have also enlisted the assistance of vendors who will set up food and drink stands to keep the triathletes and volunteers refreshed over the course of the day. Junkanooers will also be there playing live music to encourage competitors as they finish.

At the sound of the pistol at 7.30 am, for the third year in a row, the event will feature the Open Male & Female Olympic distance category. This will be followed at 8.15 am by the triathletes competing in the various individual categories of the Sprint, including the Team Relay. They will swim the 750m triangular course in the ocean at Taino Beach, then transition to the bike and cycle 25km over Casuarina Bridge to the first round about and back. They will then run 5km from the transition area on Taino Beach to St Jude’s at Smith’s Point, and back down Jolly Roger Drive to Bell Channel, and return to the finish line at Taino Beach. The Olympic competitors will complete each circuit twice. All triathletes will be required to comply with world safety standards and must wear cycling helmets on the bike rides, including IronKids,

“Safety is obviously a paramount concern for our committee,” said Baker. “Our goal has always been to provide a competitive but safe sporting environment and so to ensure compliance with international standards, a few helmets will be available at the Race Packet Pickup to purchase on Thursday, October 31st and Friday, November 1st at the Manor House the Grand Lucayan between 5 pm and 7 pm.”

“We would love to see a large turnout this year from our local schools and sports teams,” said St. George. “It’s a great way for all of us to come back together and celebrate the resilience of our island.” Triathletes or teams interested in participating in this year’s event are encouraged to register via the website https://www.conchmantriathlon.com or visit the event’s social media at https://www.facebook.com/conchmantriathlon/ for more information.

Organizers of the 33rd GBPA Conchman Triathlon meet the press to discuss the upcoming sporting event set for November 2, on Grand Bahama Island. 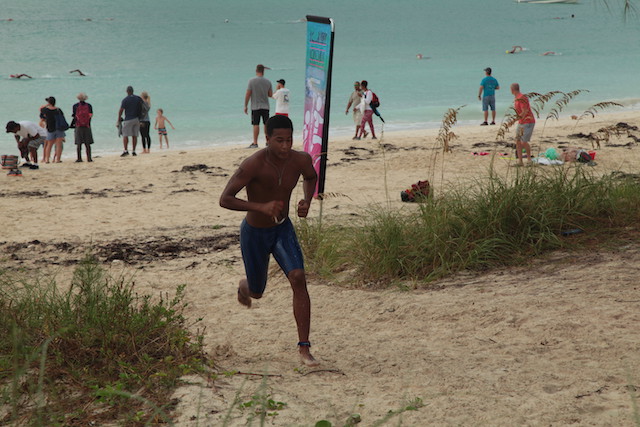 This triathlete completes the swim section of his race and is off to suit up for the next leg of the competition. 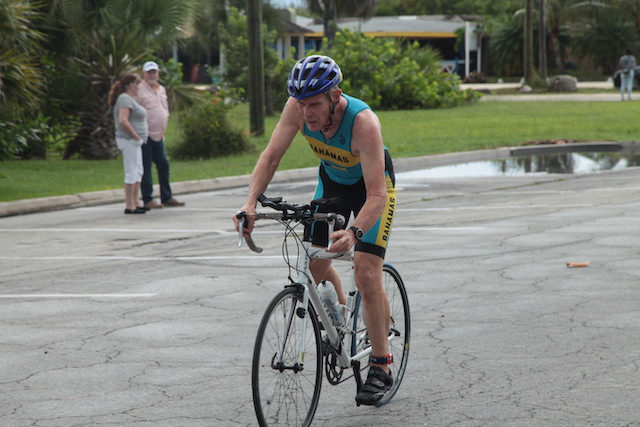 Bikers of all ages are preparing to compete in the 33rd GBPA Conchman Triathlon. This cyclist hits his stride as he works his way to the finish line.