Permanent Secretary in the Ministry of National Security, Eugene Poitier said The Bahamas is especially vulnerable to illicit trafficking, especially maritime, due to its position on the route to illicit markets in North America and Europe and its geographical configuration of some 700 spread over more than 100,000 square nautical miles of water.

The Permanent Secretary was speaking on behalf of the Minister of National Security the Hon. Marvin Dames at the opening ceremony of the two-day Inter-American Drug Abuse Control Commission (CICAD) Secretariat for Multidimensional Security Meeting held at the British Colonial Hilton, Wednesday, September 11, 2019.

Mr. Poitier said, “We are all aware of the potential adverse impact that narco-trafficking can have on countries, cities, communities, families and individuals. Included among these are:

o Threats to financial services and the possibility of Blacklisting

· Undermining the authority of governments

· The corruption of politics and politicians

o Through the funding of preferred candidates –

· The inevitable health and social consequences of the circulation of drugs among the population (Payment in kind).”

He noted that Maritime Narco-traffickers are extremely innovative. They employ methods using vessels that operate underneath the water and on top of the water; with contraband placed inside these vessels and attached to the sides of the vessels.

Mr. Poitier added that the Nacro-traffickers have used small go-fast boats and large tankers; private pleasure crafts and commercial vessels; just to name a few methods of transport and are extremely focused and have the resources to carry out their mission.

“What this says about drug control strategies, at the national, regional, and hemispheric level, is that these strategies must also be wide-ranging, and they must be balanced.

“We too, must use our collective talents and resources if we wish to have a chance to remain a step ahead of these organizations. This is the approach that The Bahamas continues to take in its decisive action against drug abuse and illicit trafficking.”

He explained that as a country, The Bahamas has been guided by the various regional, hemispheric and global drug control initiatives such as the international drug control treaties, relevant instruments of the Organization of American States and other multilateral and bilateral agreements.

The Permanent Secretary said much of the crime in the country is drug related, or associated with the platform that illicit drugs have created.

He stated that guns from small arms trafficking, for example, are being used to commit robberies, burglaries, and indeed, homicides. “Moreover, like the situation in many of your countries, we have seen these trafficking organizations branch out into human smuggling, along with the smuggling of drugs and firearms.”

Mr. Poitier added that in the past, countries used to be categorized as either producer, transit or consumer nations but now, given the changes and proposed changes in national and local laws of member nations, those the member states may have to rethink these categories going forward.

“Although many of the historical routes and methods will remain, new ones will develop that reflect the demand for and supply of new substances.

“However, we also know that, with such an expansive territory, if we do not work together with other key partners, we will not see the kind of results that we would like.

The Permanent Secretary said, “Policies, programmes and activities developed in The Bahamas, or the Caribbean, in Latin or North America, will not be sufficient, by itself, to effectively address the related articles and recommendations in the various conventions and treaties; in particular, the 1988 United Nations Convention against the Illicit Traffic in Narcotic Drugs and Psychotropic Substances.”

For the past three decades, CICAD has assisted Member States in addressing drug use and abuse in the region. The Bahamas was at the 1986 Specialized Conference in Rio de Janeiro, Brazil that recommended the establishment of CICAD, and has been a Member of the Commission since its inception. 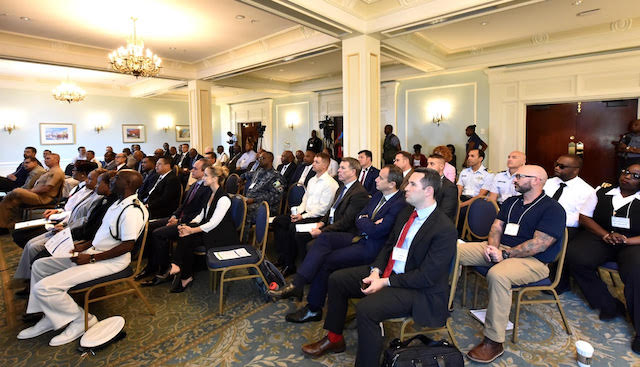