Last week, the business community of Grand Bahama officially helped proprietor Olivia Pagés open her newly revamped Stoned Crab Restaurant and Bar on Taino Beach. The iconic restaurant, with its signature, three pointed roofs was packed with well-wishers including the Deputy Prime Minister, Peter Turnquest, who is also the MP for the Lucaya area.

Welcoming guests to the event, was Master of Ceremonies, Brenford Christie, well-known attorney for McKinney, Bancroft & Hughes, and Step-Father to the owner. Ms. Pagés began the official remarks of the night by explaining her love for the island and the people who live here and her desire to make Grand Bahama her permanent home. Born in Germany, Olivia as she prefers to be called, was a frequent visitor to the island with her family since 1975. Olivia noted that it was during one of her frequent visits to Grand Bahama and to the local fish fry, that she would lament the need for locals and tourists alike to enjoy more beach restaurants, just like they have them all over the world next to each other to show what Freeport has to offer. Seeing the broken down old Stoned Crab Restaurant, she decided to bring it back to life. “My best friend Katharina Posten and I spent the last 4 years planning everything-from Layout to design, menu and drinks.

The restaurant, which opened in February of this year, has been the talk of the town for months. With an investment of 3.5 million, surviving 2 major hurricanes, local contractor Frecon worked along with other local builders to finish the restoration. Olivia, choose to have an official opening once she felt that the customer service was polished, and all of their little fixes were done. She thanked her father and mentor Jürgen Koll who died 10 years ago for being the most important person in her life, and who taught her to never give up and to always believe in her dreams. She also thanked all the new friends she made here for their constant support on her quest to bring The Stoned Crab back to life, and now employing over 40 Bahamians.

On hand to bring remarks for the Grand Bahama Port Authority was President, Ian Rolle, who addressed guests on behalf of his Chairman, Sarah St. George, who was an off-island. “I applaud the serious investment in this iconic restaurant, especially at a time such as this, when a number of persons have a “wait and see” mindset about investing,” said Rolle. “Whilst the renovation works were certainly a challenge due to extreme overrun, Olivia remained committed and dedicated to the project at hand. She has pledged to participate in the economic turnaround for Freeport and for that alone, she deserves our utmost appreciation and a round of applause.”

Before cutting the ribbon and officially opening the restaurant, Deputy Prime Minister Turnquest spoke about the beauty of our islands, and the sun, sand and sea and great people who live here that drew Olivia to her purchase and support of Grand Bahama community. “Despite the challenges, which included some very active hurricane seasons, Olivia has spent the past four years planning and creating a new vision for The Stoned Crab,” Turnquest noted. “This opening is the result of her persistence, hard work, and determination and I for one, am so proud of what she has been able to accomplish. The Stoned Crab is a truly beautiful space with a modern and luxurious esthetic. As a friend of mine noted, everywhere you sit, stand or look – there is a view of that wonderful sun, sand and sea!”

“I understand that The Stoned Crab will be open all day, offering breakfast, lunch and dinner – as well as beach service - a perfect addition for the vibrant tourist economy which we are creating for Grand Bahama Island,” Turnquest added.

“Ladies and Gentlemen, I believe that Grand Bahama Island is poised for a major comeback. The reopening of The Stoned Crab coupled with other amazing elements like the Pirate’s Cove & Zip Line next door, and the return of our beloved Toni Macaroni, Grand Bahamians should be excited about the resurgence of the Taino Beach area as a hub for fun family entertainment.”

The night culminated in a blessing of the restaurant by Father Oswald Ferguson of Mary Star of the Sea Roman Catholic Church, and the cutting of the pink ribbon by Turnquest and the owner, along with her 4 children and her partner, Benjamin Power, the restaurant’s Food and Beverage Manager as well as her head chef Ranwa Ferguson. “I am so thankful to all my staff who have worked incredibly hard to get us to this point,” said Olivia. “I am accomplishing a dream I have had, I know my father would be very proud.“ To all the local business owners and new investors she said: “let’s get going- let us make Grand Bahama, Grand Again.” 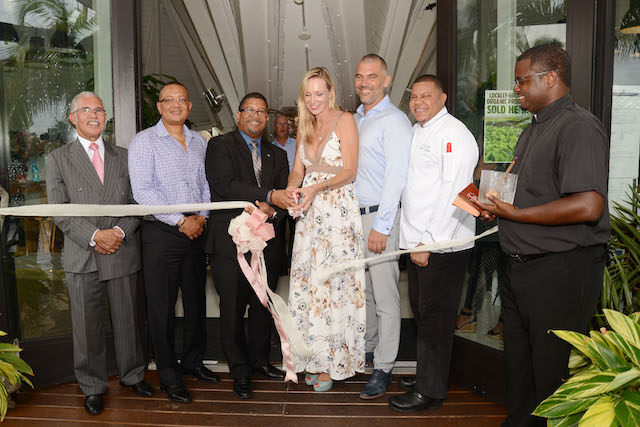 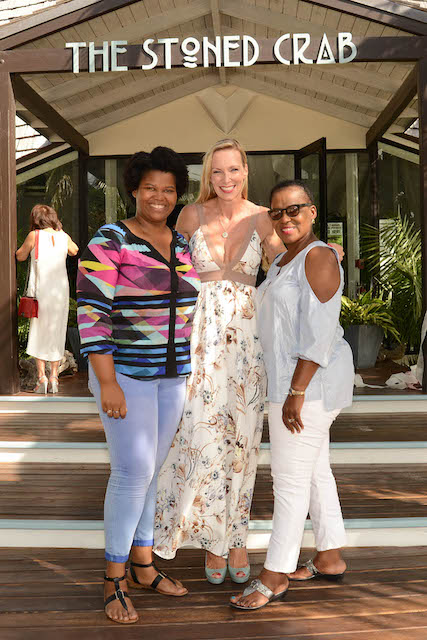 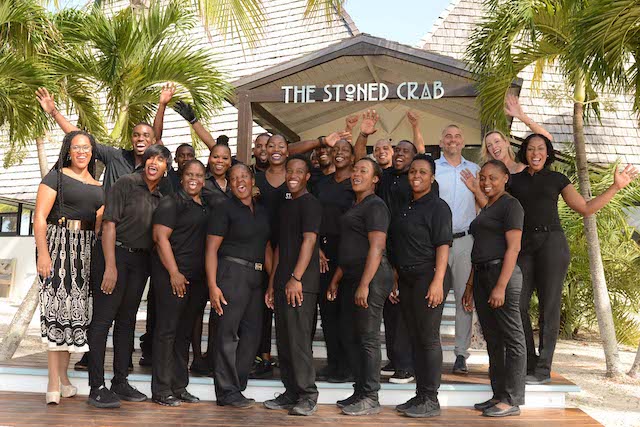