After weeks of wicked weather the folks in Louisiana now face another foe in Tropical Storm Barry.  Famous for its rivers and their influence on culture, the gulf coast of Louisiana is infamous for it's flooding and the great loss of life that often comes with.  From the Great Flood of 1927 to Hurricane Katrina, residents of Louisiana are more than aware of the threat they face when the waters around them begin to rise.

Crawling along to the west-northwest at just 5mph, Tropical Storm Barry is expected to bring heavy rainfall over the next few days as it makes its turn northward.  Maximum sustained winds have increased to 65mph and due to the slow forward movement further strengthening is forecast with landfall expected on Saturday as Hurricane Barry. 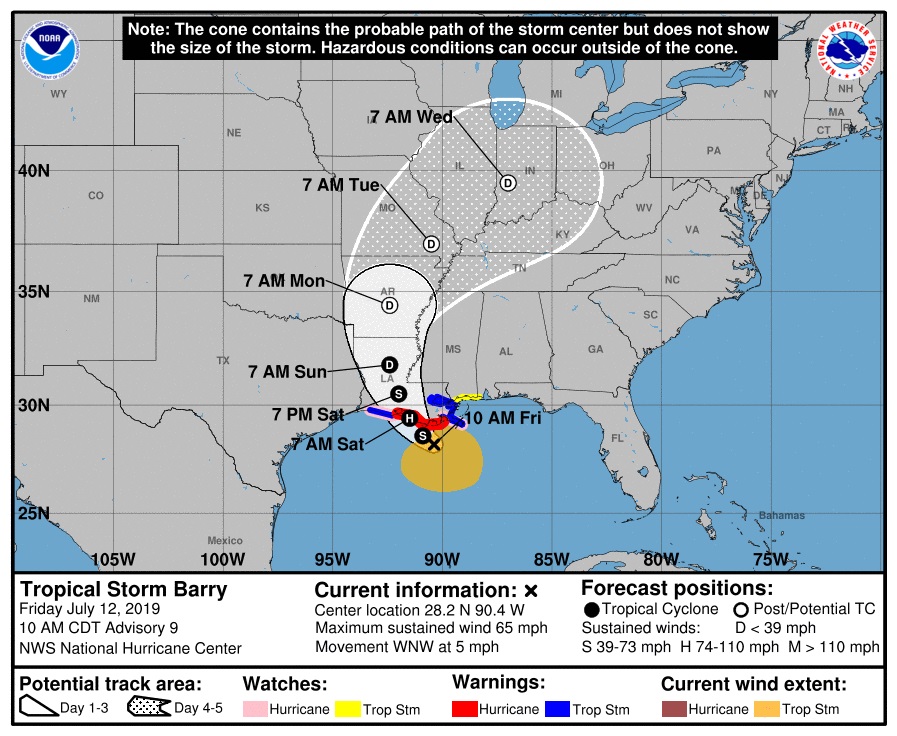 The National Hurricane Center is urging those in Barry's path to take heed to 3 key messages:

1. There is a danger of life-threatening storm surge inundation along the coast of southern and southeastern Louisiana, portions of Lake Pontchartrain, and portions of coastal Mississippi where aStorm Surge Warning is in effect. Water levels are already beginning to rise in these areas, with the peak inundation expected on Saturday. The highest storm surge inundation is expected between Intracoastal City and Shell Beach.

2. The slow movement of Barry will result in a long duration heavy rainfall and flood threat along the central Gulf Coast, across portions of the Lower Mississippi Valley and north into the Tennessee Valley through the weekend into early next week. Flash flooding and river flooding will become increasingly likely, some of which may be life-threatening, especially across portions of southeast Louisiana into Mississippi.

Continue to check in with BahamasLocal.com all hurricane season as we track the tropics.