Sands Wants to Save our Bahama Land

Glass bottles are recyclable. Typically bottles are made with between 20 and 30 percent recycled material. This is good news for our emerging green country, but glass is heavy and can be hard to transport. Despite this fact, the Bahamian Brewery and Beverage team will launch recycling of their beer bottles in the Abacos on July 16th, 2019.

“We have been recycling bottles in Freeport for the past 11 years and in Nassau for the past 9 years,” said Gary Sands, the General Manager for Bahamian Brewery and Beverage. “Last year was a major accomplishment to the recycling program as we collected just over 50% of the bottles we sold to the market. With the launch of Abaco we hope to reach 60-65% this year.”

Sands announced the recycling news on Thursday night in Marsh Harbour, Abaco, at a customer appreciation party for their loyal beer distributors as well as Jimmy’s Wines & Spirits clients. “Abaco is the forefront of recycling,” Sands noted. “You all lead the country in the push of making a cleaner Bahamas. As a proud Bahamian I look up to the community of Abaco for your efforts, and I want to be a part of this change. The success of the recycling program is only as good as the people collecting them, and those who believe in a cleaner Bahamas.”

Attending and supporting the event were the Parliamentary Secretary in the Office of the Prime Minister and Member of Parliament for Central and South Abaco, James Albury, and President of the Abaco Chamber of Commerce, Ken Hutton. Both spoke briefly at the event and welcomed the news that recycling will now begin in the Abacos. “It’s a very big step and I applaud them for being good corporate citizens, recycling is important for a more sustainable Bahamas” said MP Albury. “I am hoping this sets an example for other breweries and other companies will follow, a big thank you to the Sands Family and Bahamian Brewery Company.”

The Bahamian Brewery has a warehouse on the intersection of Don McKay Boulevard and S.C. Bottle Highway in the Maxwell's Warehouse (well known as the old Cost Rite location), as well as a Jimmy’s Wines &Spirits store which opened in 2014. They’ve assembled a very strong staff of eight, including Sales Manager, and well known industry veteran, Gerry Summers, and Winston Moss, Assistant General Manager who served as Master of Ceremonies for the night.

Joining the business community were local environmental organizations: The Bahamas National Trust and Friends of the Environment. “We are thrilled with this news from Sands,” said Cha Boyce, Executive Director of Friends. “Recycling is not easy, nor is it always cost efficient. The fact that the signature beer of The Bahamas is willing to help us improve our community and our islands is very welcome news and we will support them whole-heartedly.”

Beer bottle collection will start on Tuesday July 16th at the Marsh Harbour warehouse location from 2-5pm and will then be shipped to Grand Bahama for recycling. Only Bahamian Brewery beers will be collected which include: Sands, Sands Light, Pink Sands Radler, High Rock lager, and Strong Back, but can be brought in in any beer box. Bottles from the outlaying cays will need to be transported by the reseller but will all be accepted once they are clean and not broken. Each case will earn a return of one dollar and fifty cents.

“I never realized that, as well as saving our community, recycling bottles also provided another type of income for Bahamians,” noted GM Sands. “During my first job at the brewery I worked on Wulff Road collecting bottes. One day I helped an elderly man unload his trolley with returns which netted him thirty-seven dollars. When I paid him in cash, he looked at me with a face of excitement and gratitude and a tear running down his eye.”

“I’ll never forget, he said ‘son you have no idea what you have done for me today. I am unable to work because I am slightly disabled and, to be honest, I’m old. With the thirty-seven dollars you gave me today I am able to put food on the table for my family tonight.’ That moment right there was when I realized we were providing a new source of income for people who may not have the opportunity to work. Last year we paid out over $320,000 for returnable bottles. That’s $320,000 dollars that was injected into an already suppressed economy.”

This story and the recycling news was strongly welcomed by the attending Abaco community, as well as Sands’ comments that their Bahamian Brewery is 100% Bahamian owned and operated, employing over 150 Bahamians and only 3 expats. “I am very proud to be a part of Bahamian Brewery and Beverage, and breaking the beer industry monopoly our foreign competitors have had here in The Bahamas for the past 20 years,” noted Sands. “We are also very proud to support our Government in its 2020 Ban and will proudly stop using plastic too; look for our recycle bag campaign coming soon.” 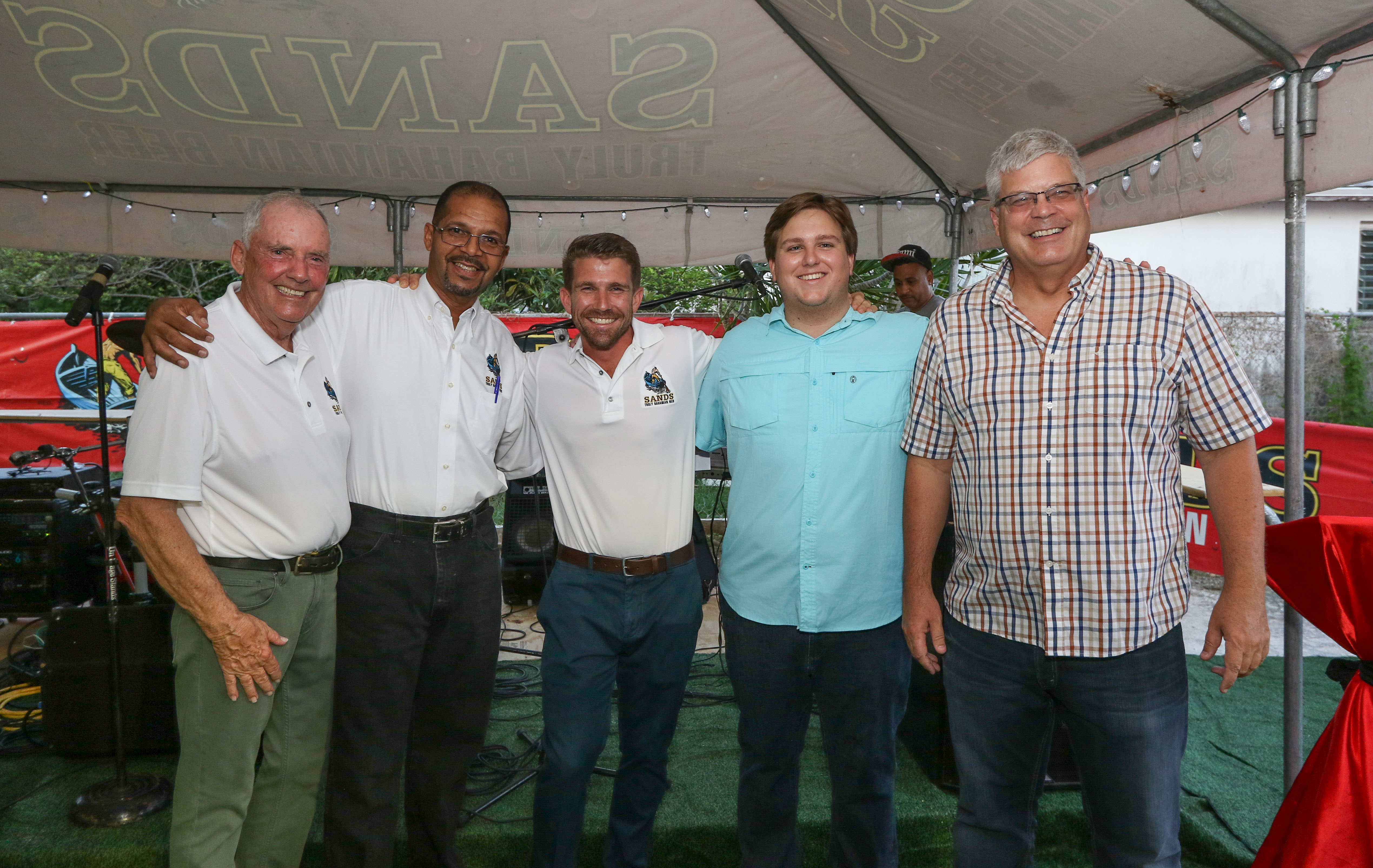 Attending and supporting the Bahamian Brewery Recycle launch in Abaco, were the Parliamentary Secretary in the Office of the Prime Minister and Member of Parliament for Central and South Abaco, James Albury, and President of the Abaco Chamber of Commerce, Ken Hutton. Both spoke briefly at the event and welcomed the news that recycling will now begin in the Abacos. “It’s a very big step and I applaud them for being good corporate citizens, recycling is important for a more sustainable Bahamas” said MP Albury. “I am hoping this sets an example for other breweries and other companies will follow, a big thank you to the Sands Family and Bahamian Brewery Company.” Pictured are (left to right) Abaco GM Gerry Summers, Abaco Assist Manager, Winston Moss, BBB GM Gary Sands, MP Albury and President Hutton.

As a thank you to all customers and clients who attended the recycle launch the Abaco Brewery team handed out insulated recycle sands bags. Pictured is Deontia Bain, Jimmy's Abaco Accountant, pictured with a guest at the Marsh Harbour celebrations.

Determined to be different, Bahamian and FUN, GM Gary Sands has created an alternative bar stand for their signature events. These sailing sloops, can now be used as great decorative bars for regattas, parties, etc.

ALL PICTURES ARE CREDITED TO: