Ministry of Environment officials today issued a last call for entries from schools for its popular touring campaign #BeAHero, taking colourful capes and a strong message to students that clean communities are everyone’s business and no one is too young to get in the game.

“We’ve seen amazing enthusiasm at every school we’ve visited. From the youngest child who just learning how to read to students who are raising and selling chickens and eggs, from schools in the most challenged areas to those in gated communities, we have seen incredible students who are making a difference in their immediate areas,” said Minister of Environment & Housing Romauld ‘Romi’ Ferreira.

Ferreira introduced the campaign in 2018, part of a mission to instill a sense of responsibility for a clean environment in youth.

It was the second prong of a two-part clean-up initiative that began with an island-wide garbage, trash and debris collection paid for by taxpayer dollars – a process that was not sustainable financially, but had to be carried out, the minister said, because New Providence was littered with abandoned vehicles, discarded appliances, mattresses and household furnishings that turned empty lots into havens for rats, roaches and other vermin and crime. The school program was aimed at changing the mindset.

Over a period of more than six months, teams led by the minister and the two marketing companies that assisted visited 19 schools primary and junior high schools. Each school was challenged – identify a project or a campaign improving the environment in your area, post before, during and after photos and drum up likes and interest on social media.

“We even had responses from young people whose schools we had not yet visited in the Family Islands,” said Ferreira. “Everyone wanted to be a caped crusader for a cleaner, greener, more pristine Bahamas.”

Corporate Bahamas funded most of the costs with The Tribune media group donating an unparalleled advertising space.

Final entries must be posted by June 22nd on any of the social media pages; Facebook, Instagram, Twitter or Snap Chat. Entries can also be emailed to info to contact@barefoootmarketing. Winners will be announced in July. 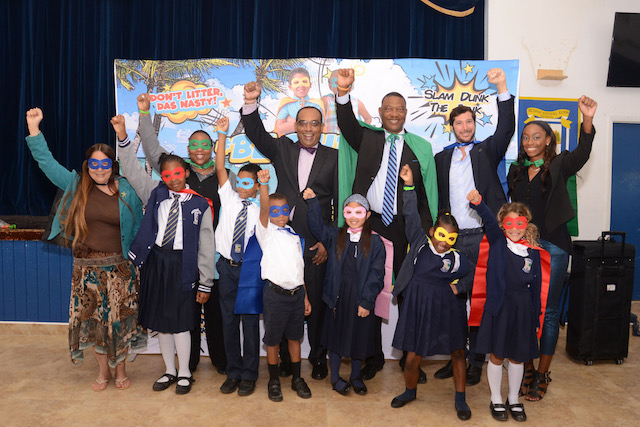 #BeAHero Student Phase comes to and end.
Tree planting at Adelaide Primary – Mrs. Patricia Minnis, third from right, helps to plant a tree at Adelaide Primary School as part of the Ministry of Environment’s Be a Hero school campaign that reached thousands of students in 19 schools. Also pictured Environment Minister Romi Ferreira and representatives from Commonwealth Brewery, one of the many corporate sponsors who underwrote the bulk of costs for the campaign.